Crystalline solids and amorphous solids are the two types of solid formed by atoms, ions, or molecules. Molecular, ionic, covalent, and metallic crystalline solid are the main types of crystals formed by their constituents with a definite structure. An amorphous solid is a material that does not possess a definite structure and sharp melting point. 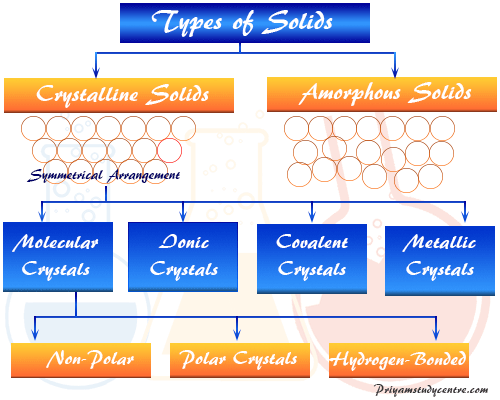 In chemistry, a solid molecule is characterized by its definite shape, strength, density, and rigidity rather than liquid and gases. Solids are rigid due to the absence of translatory motion on the structural unit. These units are fixed to their mean position with strong forces of attraction.

A crystal or crystalline solid is a solid material where constituents like atoms, molecules, or ions are arranged in a definite and orderly arrangement over a large distance in the crystal lattice. This is called long-range order.

Lithium chloride, sodium chloride, potassium chloride, sugar, ice, and quartz are the most common examples of crystalline solid. These materials are melted by a specific heat with a definite geometrical structural arrangement.

Crystalline solids have well-defined edges and faces with definite melting points. The study of the geometrical structure in the crystal lattice is called crystallography.

The structure of the sodium chloride crystal is given below the picture, 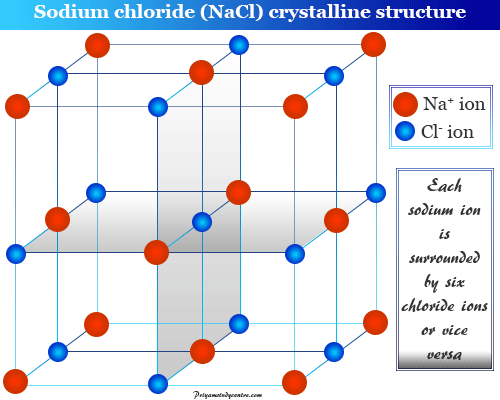 Bragg diffraction experiment in physics or chemistry is very useful for the determination and analysis of crystal structure. It is developed from the very simple relation between wavelengths of the x-ray radiation and spacing between the two lattice planes.

Amorphous solid is a material that does not possess a definite structure, sharp melting point, and the constituents do not form an order arrangement. The constituents are extending over a short distance. This is called short-range order.

Glass, pitch, rubber, plastics are common examples of amorphous solids. It has many characteristics of crystalline solid such as shape, rigidity, and hardness.

They do not arrange orderly and melt gradually over a range of the temperature. Therefore, amorphous solids like Glass, pitch, rubber, plastics are called supercooled liquid rather than solid.

Difference between crystalline and amorphous solids

The main differences between crystalline and amorphous solids are,

Based on the nature of force operating between constituents (atoms, ions, molecules), the crystalline solids or crystals are classified into four types,

Forces that hold the constituents of molecular crystalline solid are weak Van der Waals type. The forces are two types like interatomic or intermolecular and originating from the dipole-dipole attraction.

Due to the presence of weaker forces, the molecular crystals are a soft and comparatively low melting point. The common examples of molecular crystalline solids are carbon dioxide, nitrogen, mica, borax, boric acid, most organic hydrocarbon like alkanes or alkenes.

According to polarity, the molecular crystalline solids are mainly three types,

Some molecular crystalline solid have a non-directional structure due to the absence of the dipole moment.

A polar molecule is one in which one end of the molecule contains a positive charge and the other end contains a negative charge. Sulfur dioxide and ammonia are common examples of polar crystalline molecules. Due to electric polarization the constituent elements also binding by low forces of attraction.

Hydrogen bonding is the weak type of chemical bonding due to very unstable attractive forces between a hydrogen atom and electronegative atoms like oxygen, nitrogen, and fluorine. A common example is seen in the dimer of formic acid or acetic acid.

The hydrogen bond is electrostatic but very weak with a bond energy of 5 to 6 kcal. The most discussed example of a hydrogen bonding crystalline solid is ice.

In ice, the oxygen atom is surrounded by four hydrogen atoms at the corner of the tetrahedron. A list of organic materials like alcohol, carboxylic acid, proteins is also an example of hydrogen bonding crystalline solids.

They have very little elasticity and cannot be bent easily. The melting point in ionic crystals is high which is decreases with increasing the size of the ions.

Calcium carbonate (CaCO3) is an example of an ionic crystal where some atoms are held together by covalent bonding.

In many crystals, the atoms in the structural units are held together by covalent bonding by pairing electrons of hybridized orbitals to form giant type molecules.

In a diamond, every carbon atom is covalently linking with the other four carbon atoms along the tetrahedron.

In hexagonal crystalline form, every metal atom is surrounded by 12 other metal atoms by the metallic bond with coordination number twelve. The forces are non-directional in nature. All the metals of periodic table elements are formed different types of crystals structure.

Allotropes of carbon have formed both types of solids, crystalline and amorphous in nature.

In diamond, each sp3 hybridized orbital of carbon is tetrahedrally surrounded by four other carbon atoms. The C-C bond distance in the diamond crystal is 154 pm. These tetrahedral structures form a cubic crystal unit of the diamond.

Graphite consists of the layer structure in each layer of the carbon atoms is sp2 hybridized. It is arranged in a hexagonal planner arrangement with free π-electrons.

The π-electrons are responsible for the electrical conductance in graphite. Successive layers of carbon atoms attached by weak van der Waals forces with separation of layers 335 pm.

Coal, carbon black, soot, carbide-derived carbon, and other impure forms rather than graphite and diamond are examples of amorphous solids.

All of these forms contain poly-crystalline structures. Therefore, amorphous carbon is the allotropes of carbon that do not form a crystalline solid structure.