Acetaldehyde (also called ethanal) is a colurless, pungent-smelling organic compound with the molecular formula CH3CHO or C2H4O. It is prepared industrially by the dehydrogenation or air oxidation of ethanol in the presence of a silver catalyst at 300 °C. The structure and hybridization of the acetaldehyde molecule are given below the picture, 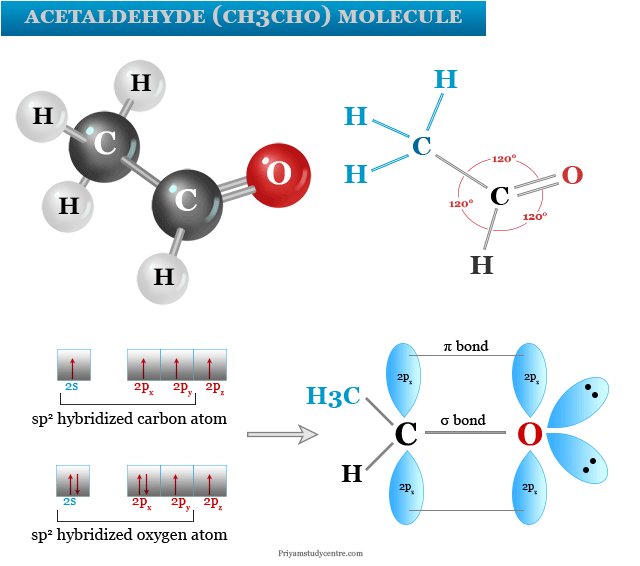 Acetaldehyde occurs naturally in several foods like coffee, bread, and ripe fruit. It is also produced by the partial oxidation of ethanol by the liver enzyme dehydrogenase.

An aldehyde (-CHO) functional group is bound to a methyl group (-CH3) in an acetaldehyde molecule. Therefore, it is the second simplest aldehyde after formaldehyde.

Acetaldehyde undergoes condensation in presence of dilute sodium hydroxide, potassium carbonate, or hydrochloric acid to form a syrupy liquid. It is known as aldol.
2 CH3CHO → CH3CH(OH)CH2CHO

In Strecker synthesis, acetaldehyde condenses with ammonia and hydrogen cyanide to give an amino-nitrile compound. It is further hydrolyzed to give amino acid alanine.

When acetaldehyde is treated with a few drops of concentrated sulfuric acid, a vigorous reaction takes place by the formation of a polymer like paraldehyde (CH3CHO)3. It is a present smelling liquid with a boiling point of 128 °C. Paraldehyde is used in medicine as a hypnotic.

When acetaldehyde is treated with a few drops of concentrated sulfuric acid at 0°C, the tetramer metaldehyde (CH3CHO)4 is formed. It is a white solid with a melting point of 246 °C. It regenerates CH3CHO by distilling sulfuric acid.

Acetaldehyde has a wide range of applications. It is used as starting material for the production of several compounds like acetic acid, acetic anhydride, ethyl acetate, n-butanol, etc.

What is hydrogen sulfide? Hydrogen sulfide (chemical formula H2S) is a colorless, flammable, toxic, or poisonous gas molecule that can be detected by its smell...