Nitrogen is a nonmetallic chemical element of group 15 of the periodic table with symbol N and chemical formula N2. It is a colourless, odorless, tasteless gas, and an essential element of the living matter. Dinitrogen is the most plentiful substance in the earth’s atmosphere which is present in air 78% by volume and 75% by weight. 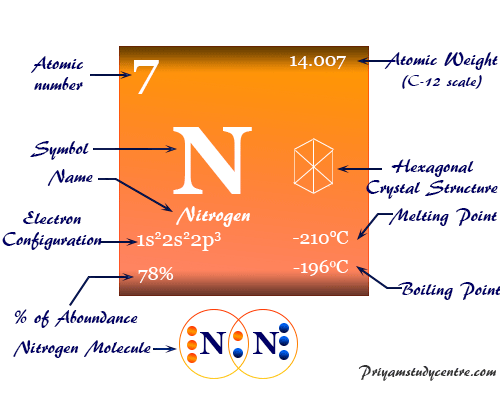 The abundance of nitrogen in rocks and soil of the earth’s environment is remarkably low (about 19 ppm) comparable to gallium, niobium, and lithium. Only nitrogenous minerals like potassium nitrate (saltpeter) and sodium nitrate (Chile saltpeter) are isolated via nitric acid by the action of nitrifying or nitrogen fixation bacteria.

Carl Wilhelm Scheele and Henry Cavendish had independently discovered and isolated nitrogen but the credit for discovery was given to Scottish physician Daniel Rutherford in 1772. Rutherford has given this credit because his work was published first in a science journal.

The name nitrogen was given by French chemist Jean-Antoine-Claude Chaptal in 1790. He may derive the name from the Greek word ‘nitron’ and ‘genes’ mean nitre forming.

Where is nitrogen found?

Major deposits of nitrogen compounds like nitrate are found in Bolivia, Italy, Spain, Russia, and some regions of India. The major human interference occurs through the artificial fixation of N2 by fertilizers to meet the increasing demand for foods in our growing human family.

Nitrogen in the periodic table

The electronic configuration of nitrogen is 1s2 2s2 2p3. Therefore, it is placed in group 15 and period 2 of the periodic table. 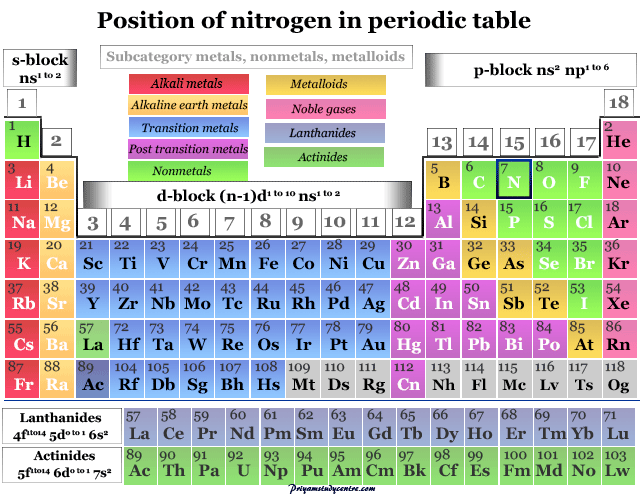 It is placed along with p-block elements. The group members of nitrogen are phosphorus, arsenic, antimony, and bismuth.

In learning chemistry, naturally occurring nitrogen exists mainly in two stable isotopes, 14N and 15N. The relative abundance of 14N:15N ≈ 272:1. The radioactive isotope, 7N15 may be prepared or separated by an exchange reaction or by thermal diffusion.

In 1919, a British physicist, Ernest Rutherford first introduced artificial facts of radioactive nuclear reaction by the bombardment of the alpha ray on 14N isotope to form 17O and protons particles.

Assuming the +5 cationic configurations by losing all the five outer electrons is just impossible. Therefore, most of the chemical compounds of nitrogen are covalent compounds with an oxidation state of +3 or +5. The oxidation number of the element covers a wide range from −3 (in NH3) to +5 (HNO3). Due to the non-availability of energetically vacant d-orbitals, it has no scope for valency expansion.

The chemistry of nitrogen describes that the atom may attain the next noble gas electronic configuration by gaining three electrons to form an N−3 ion (oxidation number = −3). However, such electron attachment involves a high positive enthalpy change.

Dinitrogen is generally unreactive at room temperature due to the following reasons,

Industrially or commercially large amounts of dinitrogen are obtained during the isolation of oxygen by fractional distillation of liquid air. The N2 molecule boils off before oxygen because its boiling point is lower (N2: −195.8 °C; O2: −183.1 °C). The product usually contains a fraction of argon.

It can also be produced on a large scale by burning carbon or hydrocarbon in the air. The produced carbon dioxide and water are separated from the gas mixture.

Nitrogen may be obtained in the laboratory by a variety of chemical reactions. Some of these production processes are given below,

What is nitrogen used for?

What is the nitrogen cycle?

Nitrogen is an essential element for the growth of plant and animal life in nature. It continuously interchanges between the atmosphere and biosphere. To balance the nitrogen cycle in nature, it returns to the atmosphere by the following major steps,

Rhizobium is the most important bacteria in this category. It lives symbiotically in the nodules or roots of certain plants like Leguminosae, pea, beans, etc.

The nitrogen-fixing enzyme nitrogenase in fixed nitrogen into the soil. The fixation is subsequently greater than the artificial fixing through the Haber process (150 million tonnes vs 120 million tonnes).

Industrial fixation is used to grow nitrogen into the soil for the production of large amounts of food for the ever-increasing population of the world. The main procedure involves the Haber process for the manufacture of ammonia which converted nitric acid and other fertilizers.

Other processes to fix nitrogen