Oxygen, atomic number 8, symbol O, and molecular formula O2 is the most abundant chemical element of the Group-16 or chalcogen family in the periodic table. It makes up to 47 percent of the earth’s crust in the form of liquid and solid oxides, oxoacids, and gas forms. Oxygen is essential for living organisms (plants and animals). 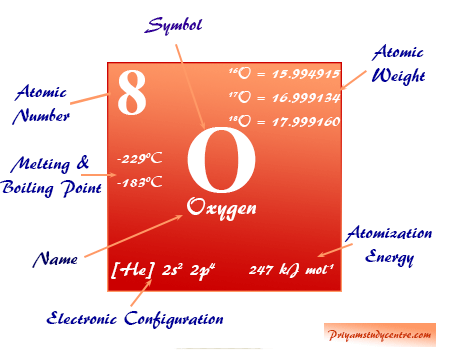 The elemental oxygen atom is an isotopic mixture of O-16, O-17, and O-18 isotopes that occur in the natural environment 21 percent by volume in air, and 86 percent by weight of liquid water in oceans.

Isotopes of oxygen and their uses

O-17 and O-18 are prepared by fractional distillation or electrolysis of water molecule or thermal diffusion of oxygen gas. Elemental oxygen isotope (mass number = 18) used as the tracer in chemical kinetics and mechanistic studies but O-17 (mass number = 17) is used in NMR spectrum analysis.

Oxygen on the periodic table

The nonmetallic chemical element oxygen is placed on group-16 of the periodic table. It is a p-block element placed with sulfur, selenium, tellurium, and polonium given below the picture. 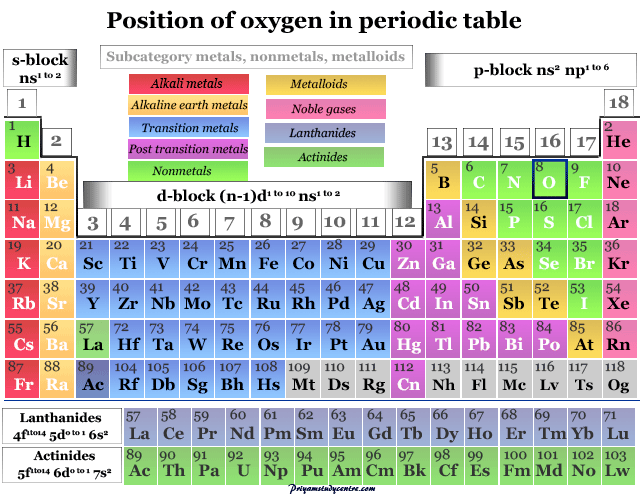 Dioxygen is fairly soluble in water and highly soluble in organic solvents like acetone and benzene and forms weak charge-transfer complexes. It is a pale blue liquid but a blue solid crystal lattice. The gaseous oxygen molecule colorless but in liquid or solid form, a single photon collides with other molecules and excites both. Absorption of electromagnetic spectrum radiation in the red region to the green visible region gives observed blue color.

With the increasing atomic number in group-16, the resistance of the elements decreases. Oxygen and sulfur are an insulator, selenium and tellurium are semiconductors but polonium is a metal conductor of electrical energy.

Due to the 2s2 2p4 outer electronic formula, the elemental oxygen generally shows a −2 oxidation number or state in a chemical compound. The elements are two electrons short of the next noble gas configuration. Therefore, bonding with these two electrons is achieved by gaining two electrons by electropositive elements or by making two single covalent bond or one double bond with other elements.

It has very high electronegativity and electron affinity in favor of the formation of the crystalline solid compounds with alkali (lithium, sodium, potassium) and alkaline (beryllium, magnesium, calcium) earth metals.

In learning chemistry, the outermost quantum shell consists of the 2s2 2p3 electronic configuration. The interesting facts about oxygen alone in the Group-16 or chalcogen family, they do not possess d-orbital. Therefore, oxygen only shows valency 2 but due to the presence of vacant d-orbitals other elements like sulfur, selenium, tellurium, and polonium possess 2, 4, and 6 valances for chemical bonding purposes.

In the ground state, the highest occupied molecular diagram of the O2 molecule shows the two electrons (parallel spin) in two pi-antibonding orbitals. It is said to be the triplet state. But the next higher state is one in which the electrons are spin paired in pi-antibonding molecular orbitals. These states are termed singlet states. Normally a triplet to singlet transition is forbidden.

Oxygen element or gas molecule obtained industrially by fractional distillation of liquid air. In the laboratory, it may be prepared from different chemical compounds like hydrogen peroxide, potassium chlorate, potassium permanganate, etc. It is produced by the catalytic decomposition of hydrogen peroxide over the platinum catalyst in nickel foil.

Preparation of oxygen from potassium chlorate

If we use manganese dioxide as a chemical catalyst, the reaction occurs at 150 °C. But this process also produces 3 percent of ClO2.

What is oxygen used for?

Oxygen is the third chemical in order of use in the industry after sulfuric acid and nitrogen and nearly 100 million tonnes of beings are consumed annually throughout the world.

Uses in our body

Hemoglobin is essential for oxygen transport in our bodies. Myoglobin is engaged in the storage of O2 in muscle tissues and is used when necessary. The oxygen in our body is used in the biosynthesis of many compounds in the metabolic chain. Oxygen may convert some lipid-soluble molecules to water soluble for excretion.