States of matter or all states of matter in science define one of the distant forms in which the aggregation of molecules occurs in nature. In learning chemistry or physics, the various types of substances that made up matter can be divided mainly into four states or phases such as solids, liquids, gases, and plasma. 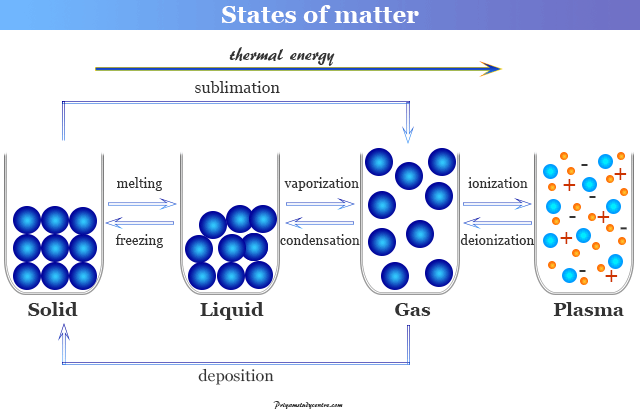 We observed these states by daily human experience. The states or phases of matter can change depending on the conditions like pressure and temperature.

For example, solid state changes to the liquid or gas, or plasma by increasing temperature. Therefore, heat is added to the substances to change the states of matter from solid to liquid to gas to plasma.

Solid is changing to liquid at its melting point. Similarly, liquid changes to a gas at its boiling point. If heat is high enough, the state is entered into plasma. Two types of opposing molecular forces derive the states of matter.

The liquid state of matter

Matter in the liquid state has a fixed volume but it contains variable shapes. Therefore, liquid can adapt the shape of the container where it can be placed.

The gaseous state of matter is characterized by a lack of definite volume and shape. In gaseous states, the matter has the property of filling any available space to a uniform density. Low density and high compressibility are also the characteristics of gases.

If the thermal energy is much greater than the forces of attraction, then we find the gaseous state of matter. Molecules in a gaseous state move at very high speeds.

The forces of attraction amongst them are not sufficient to bind the molecules in one place. All the gases are found to expand to the same extent when heated to the same interval of temperature.

In the gaseous state of matter, the thermal expansion is also the same. Gases have properties to obey some simple common pressure, volume, temperature, and mole number relation. These are called gas laws.

A plasma state is one of the four fundamental states of matter like solid, liquid, and gases. Like gases, plasma state has no fixed shape and volume and is less dense than liquid or solid-state. It has gaseous ions, molecules, or atoms that contain positive or negatively charged particles.