Types of Alcohol in Chemistry

Types of alcohol uses for the manufacture of drinks or beer, vodka, and brandy is ethyl alcohol or ethanol. Many monohydric, polyhydric, aromatic, and aliphatic alcohols are used in different alcoholic content like food beverages and drug preparation. 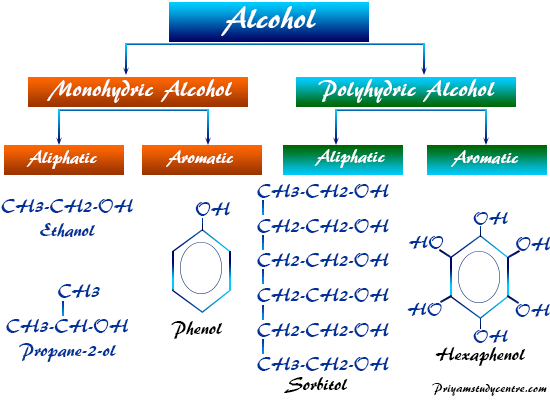 Alcohol is the isomers of ether or hydroxyl derivative of hydrocarbon prepared from alkene with specific heat and dilute sulfuric acid under pressure.

The lower members of alcohol are liquids and lees volatile due to association through hydrogen bonding extending over a chain of molecules. The higher members are solid and almost orderless.

The lower alcohols are very soluble in water and solubility diminishes as molecular weight increases because the oxygen atom of the hydroxyl group forms hydrogen bonding with water molecules.

Infrared spectrum studies of hydroxyl groups in alcohol show they absorbed electromagnetic spectrum radiation with a frequency from 3650 to 3580 cm−1. It is true only if there is no hydrogen bonding. Intermolecular hydrogen bonding in alcohols produces absorption in the region from 3550 to 3230 cm−1.

Alcohol withdrawal hydrogen atom by the action of metals shows acid properties. They do not affect the pH scale of the water solution because they are weaker acids than water.

The alkoxides beings hydrolyzed by water. For this reason, ethoxide is a stronger base than the hydroxide ion.

According to the number of functional or alcoholic groups, these organic compounds in chemistry are classified,

But other types of classification of alcohol are given according to the attached alcoholic group to the aromatic or aliphatic compounds or hydrocarbon.

Monohydric alcohols are organic compounds that contain one alcoholic or hydroxyl group.

Methanol, ethanol, propanol, isopropanol, butanol, isobutanol, and phenol are examples of such types of alcohol. They are commonly two types,

Dihydric and trihydric alcohol contain two or three alcoholic or hydroxyl groups. But the alcohols contain four or more alcoholic groups called polyhydric alcohols. Such types of alcohol may include,

Aromatic alcohols are the class of organic compounds containing an alcoholic or hydroxyl group in a side chain or directly to the hydrocarbon. It may be regarded as an aryl derivative of aliphatic alcohols.

Aromatic alcohols may be classified as primary, secondary, and tertiary alcohols. The methods of preparation of this type of alcohol are similar to the aliphatic alcohols.

Aromatic alcohols are also classified as monohydric, dihydric, trihydric, and polyhydric phenols, according to the hydroxyl group attached to the benzene ring. Common examples of this types of alcohol are,

Classification of alcohol is given according to the attached alcoholic group to the aromatic or aliphatic hydrocarbon. Hence these organic compounds are named aliphatic and aromatic alcohols. Aliphatic alcohols are compounds containing hydroxyl groups in the side chain of the alkyl group.

Different types of simpler monohydric alcohols are known by their trivial names for learning chemistry. This type of naming is obtained from the chemical derivative of the alkanes or paraffin like methane, ethane, and propane attached to the hydroxyl or alcoholic group.

Other types of naming by considering alcohols as the derivative of methanol. For example,

Methods of preparation of alcohols

The common methods of preparation of alcohols are given below the picture, 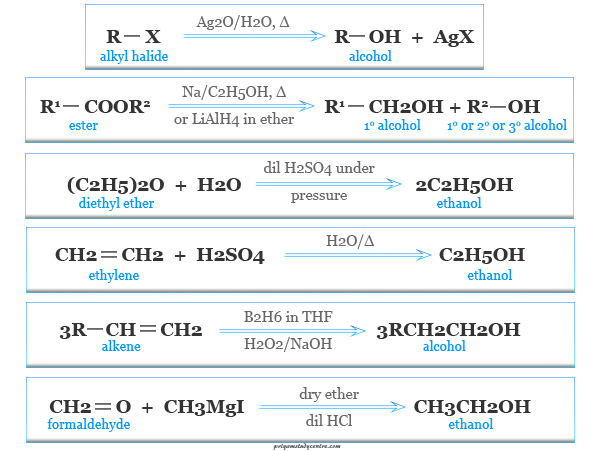 Alcohols may be prepared by hydrolysis of an alkyl halide with silver oxide suspended in water.

It is also prepared by hydrolysis of esters with alkali. This method is important for the preparation of tertiary alcohols.

Reduction of the aldehydes, ketones, or esters by excess sodium in ethanol or n-butanol gives alcohols. The process is called Bouveault Blanc reduction.

it may be prepared by heating ethers with dilute sulfuric acid under pressure. For example, diethyl ether forms ethanol.

Alkenes may be hydrated to alcohols by absorption in concentrated sulfuric acid followed by hydrolysis of the alkyl sulfate with water.

Primary, secondary, and tertiary alcohols may be prepared from appropriate carbonyl compounds by the action of the Grignard reagent.

Fermentation in the environment is the earliest method for the preparation of ethanol by the chemical catalyst and uses for the manufacture of different types of drinks brands like beer, wine, whisky, and brandy.

The carbon dioxide gas is recovered and sold as a by-product. The fermented liquor contains 6 to 10 percent alcohol used for the manufacture of wine, beer, brandy, or other types of food beverages.

What is Ionic Bonding? Ionic bonding is the electrostatic force that binds together oppositely charged ions formed by the transfer of electron or electrons from...