Methanol or methyl alcohol also called carbinol is a colourless, inflammable, poisonous alcohol with the chemical formula CH3OH. It is missable with water in all proportions and also missable with most organic solvents. Methyl alcohol is a very useful solvent for paints, varnishes, shellac, etc. 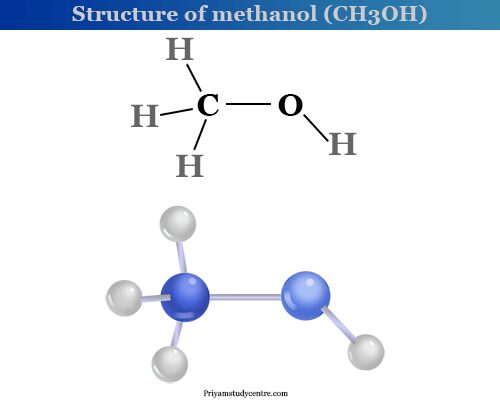 It burns in the air to form a faintly luminous flame. Methanol vapour forms an explosive mixture with air or oxygen when ignited.

In the earliest time, it was obtained from wood. Destructive distillation of wood gives tar and pyroligneous acid. Pyroligneous acid contains three organic compounds such as methanol, acetone, and acetic acid. Therefore, it was also called the wood spirit.

Molecular weight determination and analysis show that the molecular formula of methanol is CH4O. Methanol contains quadrivalent carbon, bivalent oxygen, and univalent hydrogen in its structure.

Methanol is colourless, poisonous, and volatile liquid that burns in air with a faintly luminous flame. It forms an explosive mixture with air or oxygen. It has a methyl group linked with the hydroxyl group. Some important properties of methanol are given below the table,

Methanol is produced from synthesis gas at 200 atmosphere pressures over a chemical catalyst containing oxides of copper, zinc, and chromium at 300 °C.
CO + 2 H2 → CH3OH

The production of methanol is 100 percent if the proper precaution is taken. By changing the catalyst and ratio of carbon monoxide to hydrogen, the product is a variety of higher alcohol.

Production of methanol from methane

Catalytic oxidation of methane produced CH3OH. A mixture of methane and oxygen (9:1 ratio) produced methyl alcohol when passed through a copper tube at 200 °C and 100 atmospheric pressure.
CH4 + ½ O2 → CH3OH

Methanol is the type of alcohol produced mostly from natural gas. The most common use of methanol or methyl alcohol may include,