What is sulfur dioxide?

Sulfur dioxide or Sulphur dioxide is a chemical compound of sulfur with the molecular formula SO2. It is a highly toxic and soluble gas in water. Liquid sulfur dioxide is a useful solvent that is used widely as a bleaching agent and refrigerant for food preservation. 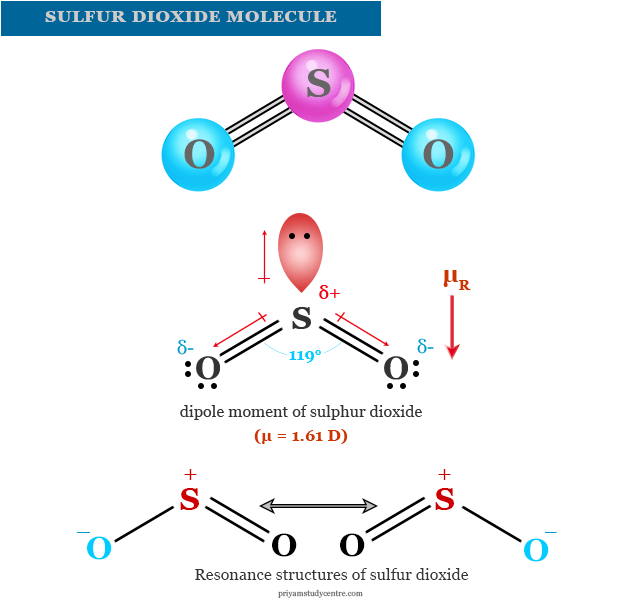 The structure of sulfur dioxide molecule contains sp2 hybridized sulfur atom bonding with two oxygen atoms. One sp2 orbital carries the lone pair of electrons and another sp2 orbital pairing with one oxygen through the coordinate bond.

The electron in the third sp2 orbital overlap with the unpaired electron in the second oxygen atom. The resonance structure of sulfur dioxide indicates the considerable double bond character of S-O bonds.

It can be easily liquefied by cooling or decreasing pressure. Volcanic activity and fossil fuels are the main natural sources of sulfur dioxide in the environment.

SO2 is a colorless heavy gas with a choking smell. It can be easily liquefied by cooling in a freezing mixture. It is highly soluble in water. The aqueous solution of sulfur dioxide contains unstable sulfurous acid.

Some common properties of sulfur dioxide are given below the table,

Sulfur dioxide acts as an oxidizing or reducing agent because sulfur atoms in SO2 can be easily oxidized to +6 state and reduced to 0 oxidation state.

How to detect sulfur dioxide gas?

Commonly, it is prepared by heating the element sulfur in the air. It is also produced by roasting sulfide minerals or burning sulfur containing fuels such as oil and coal which is a major pollutant in our environment.
S + O2 → SO2, ΔH = −297 kJ/mol

It is obtained as a by-product in the manufacture of cement by heating gypsum with clay, sand, and coke in a rotary kiln at 1200°C.

Effects of sulfur dioxide on environment

Most power plants and industrial units produce flue gases that contain SO2 and NO2. Both the gases pollute our environment. The effects of sulfur dioxide on the environment or human health, animals, and plants are given below,

What is formic acid? Formic acid or methanoic acid is a colourless, pungent, corrosive liquid or simplest carboxylic acid with the chemical formula H2CO2 or...