Ammonia (molecular formula NH3) is a colourless pungent smelling gas and highly soluble liquid in water owing to extensive hydrogen bonding. It is a useful refrigerant, solvent and used widely for the production of fertilizer. The dielectric constant of ammonia is considerably lower than that of water. Therefore, it is a poorer solvent for ionic molecules but better for organic compounds. The effect of strong hydrogen bonding in NH3 reflects its relatively high melting and boiling points. Ammonia is an important source of growing nitrogen in the soil to produce food for the ever-increasing population of the world. 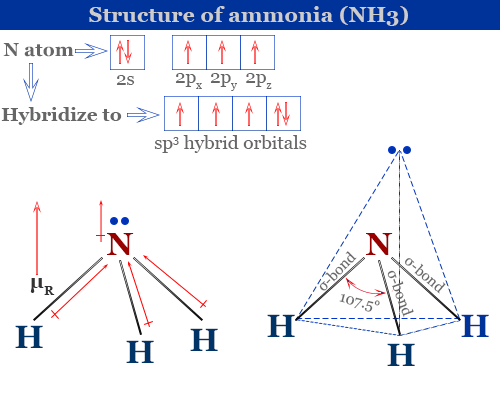 Due to the presence of a lone pair in the nitrogen atom, the structure of the ammonia molecule is destroyed tetrahedral or trigonal bipyramidal shape. The H-N-H bond angle in the NH3 molecule is 107.5°.

An aqueous solution of ammonia is weakly basic which dissolves to form NH4+ and OH– ions. The undissociated ammonium hydroxide molecule (NH4OH) is not known to exist in such solutions.
NH3 (aq) + H2O → NH4+ (aq) + OH– (aq)

Weakly boded ammonium hydrates have been isolated at low temperatures containing three dimension hydrogen bonding network of H2O molecules crossed linked with NH3 Molecules. Concentrated aqueous solutions or liquor ammonia contains about 35 percent of NH3 by weight. Bottles of liquor ammonia developed high pressure, particularly in summer. Therefore, it should be cooled under the tap and coved with a towel before opening. Liquor ammonia is extremely damaging to the eyes. Common suppliers are supplied mostly 17N NH3 solutions.

Ammonia burns in the air to produce nitrogen gas. In presence of a platinum catalyst, it produces NO at 750 to 900 °C. It can be further oxidized to form NO2 for industrial production of nitric acid by the Ostwald process.
4NH3 + 5O2 → 4NO + 6H2O

NH3 burns in fluorine to form NF3. Excess chlorine reacts with ammonia to form NCl3 while excess NH3 produces nitrogen and NH4Cl. The reaction of Cl2 with excess aqueous ammonia produces nitrogen gas. Chloramine is formed as an intermediate at pH scale 8. At pH 3 to 5, NHCl2 is formed.

Red hot carbon reacts with ammonia to give NH4CN. Red hot metal oxides like PbO or CuO are readily reduced by NH3. Sodium metal reacts to form sodamide (NaNH2). Calcium, magnesium, and zinc react with ammonia to form their nitrides.

Over 100 million tonnes of ammonia are now produced each year all over the world mainly by direct synthesis or Haber’s process. The process is favored at high pressure and low temperature. The chemical catalyst iron is used for a higher yield and appreciable rate of conversion.

Uses of ammonia in industry

A million tonnes of ammonia is manufactured and used each year over the world in wastewater treatment, leather, rubber, paper, food, and beverage industries. It can be oxidized on the surface of a hot platinum gauze catalyst to form NO. The NO can be converted to NO2 in presence of oxygen and finally nitric acid. The nitric acid produced from ammonia is used extensively in pharmaceuticals, dyes, and explosive industries.

Ammonia is used extensively in the synthesis of nitrogenous fertilizers like ammonium sulfate and phosphate in agriculture. About 90 percent of production is used in the agricultural field to growing the plants. For the preservation of fruits, it is used as an antifungal agent.

For the production of household cleaning products, we used wide amounts of ammonia. These products are used for cleaning mirrors, tubs, sinks, windows, etc. It is also used in fuel and antiseptic agents.

Ammonia is highly toxic for our body especially the eyes and skin. It reacts with water to form ammonium hydroxide which damages the body cell of our skin. Therefore, a concentrated aqueous solution or liquor ammonia effects our health. It effects mostly the eyes, nose, throat and respiratory system of our body. It results in blindness, lung damage or death. Bottles of liquor ammonia developed high pressure in summer and they can be removed after cooling.