Viscosity of liquids in chemistry?

Viscosity of liquids in chemistry is the resistance to flow exhibited by fluids (liquids or gases) like glycerol, ester, oils, water, alcohol, and ether. The flow of some liquids is slower than the others due to this property.

The reciprocal of viscosity is called fluidity which measures the flowing tendency of the liquid for learning chemistry and physics.

What is kinematic viscosity?

Kinematic viscosity in physics sometimes is used in engineering studies to compare the following property of the different liquids. It is defined as kinematic viscosity = viscosity coefficient (η)/density (ρ) and expressed or calculate in the Stoke unit in the honor of the scientist Stoke.

The measurement of viscosity data of fluids is important in the study of biology, chemistry, and physiology. It is also used to deal with various problems solve in fluid mechanics, especially in the paint, ink, colloids, rubber, textiles, etc. Recently it was used in the determination of the molecular weight of polymers. 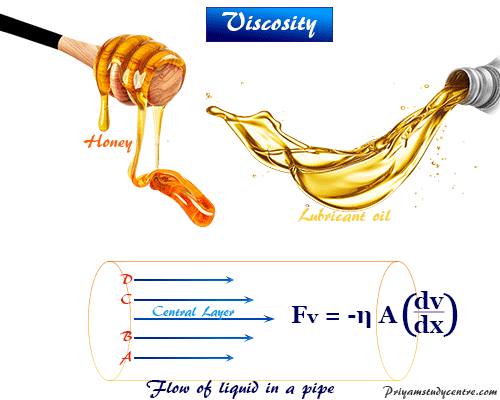 When the fluid flows within the pipe, all the parts of the fluid do not move with equal velocity. A thin layer immediately in contact with the wall of the pipe remains almost stationary.

The velocity of the successive layers from the wall of the pipe increases and remains maximum for the central layer. Therefore, there is a velocity gradient, (dv/dx) of the flowing liquid.

The main types of fluid flow may include,

What is laminar flow?

In Laminar or streamline flow, the velocity of the discharge of a liquid is low and all the layers of liquid move parallel to each other. The velocity of the fluid (liquid and gas) is always the same in magnitude and direction at any particular point.

The streamlines do not cross each other at any point in the flow. Newton’s law of viscous flow is only applicable to the laminar flow of the liquids.

What is turbulent flow?

When the rate of discharge of moving liquid is high, the condition of streamline flow is not maintained and turbulent flow is started. The velocity of the liquid at a point varies with time irregularly.

A dimensionless quantity, named, Reynolds number (Re) uses to define different types of liquid flow having the value, (dρu/η), where, η = viscosity coefficient, ρ = density, d = diameter of the tube and u = velocity of the liquid.

The capillary tube is used in viscosity measurement to maintain a streamlined flow of liquid since the diameter of the tube is very small.

The fraction between two layers moving with different velocities originates from the intermolecular attraction in liquid.

The coefficient η is the measured viscosity of liquids and gases and is defined by the Newton law of viscous flow in science.

The returning force originates due to internal friction between moving layers with the velocity gradient = (dv/dx) and area = A is expressed by the equation,
Fv = – η A (dv/dx)
where η = symbol of viscosity coefficient of liquid.

According to the above mathematical formula, viscosity is defined as the force per unit area originating between the two layers moving with the unit velocity gradient.

Coefficient of viscosity unit and dimension

Effect of temperature on viscosity

Intermolecular attraction decrease with increases in temperature. Hence the viscosity of a liquid also decreases by 2 percent with the rise of temperature per degree Celsius. This is due to the fact that at rising temperatures, the average thermal energy of its molecule increases.

The relation of η with temperature is given by,
η = A eE/RT
where E = activation energy of the viscous flow
A = constant for liquid.