What is activation energy? 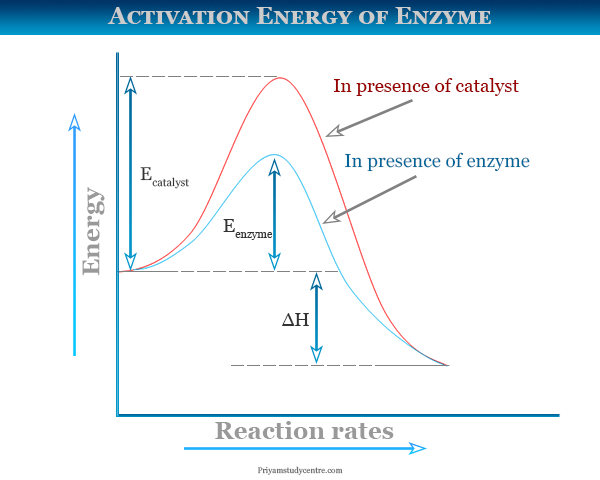 Activation energy theory or formula derived from the Arrhenius equation suggests that the efficiency of enzymes is greater than chemical catalysts.

How do enzymes lower activation energy?

For example, the Ea value for the decomposition of hydrogen peroxide by platinum = 50.2 kJ mol−1. When the same reaction proceeds by enzyme catalase, Ea = 2.5 kJ mol−1. The factor which accounts for the high efficiency of enzyme-catalyzed reactions are,

The activated complex theory is also known as the theory of absolute reaction rate proposed by Arrhenius.

According to Arrhenius when the reactants are converted into products, the reactant has passed through the crucial configuration or activation to higher energy levels. This is called the transition state.

The idea of the activated complex in the transition state is better understood by the example of the formation of a molecule like hydrogen iodide.

Suppose a hydrogen atom approaches halogen molecules to form an activated complex. When these two are far apart, the energy of the system is equal to the sum of individual energies.

As the hydrogen atom comes close to the iodine molecule, the orbitals of the hydrogen and iodine become overlap. Therefore, the iodine-iodine chemical bonding begins to stretch. The energy of the system now trends to activated or increases by the formation of the complex.

In learning chemistry, the meaning of activation energy or activated complex is made clear with the schematic diagram or reaction rate coordinate vs energy graph given in the below picture, 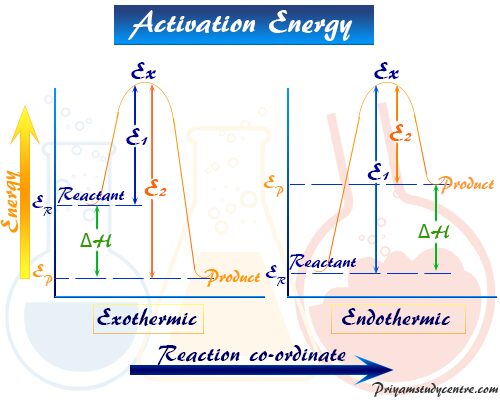 The average energy of reactant and product in the above diagram is represented by ER and EP respectively. There is minimum energy for the reaction denoted by Ex required for any chemical changes.

From the above diagram, the excess or additional energy (Ex − ER) that the reactant must acquire for a chemical transformation. It is called activation energy in chemical kinetics. It is denoted by E1 for atoms or molecules.

Activation energy is usually represented by Ea and is found from the Arrhenius mathematical formula,
k = A e−Ea/RT
where A = constant

In enzyme catalysis reaction in biology, the chemical catalyst can be lowering the activation energy which permits a larger amount of reaction in a given time by the formation of the intermediate activated complex.