What is Pressure in Science? 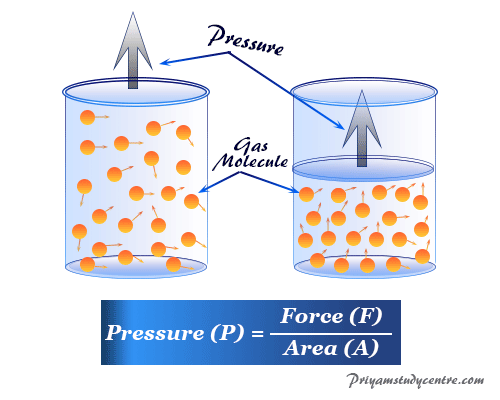 This formula is used to calculate the pressure in any state of matter (gases, solid, and liquid) and derive unit dimensions of the property.

A gas consists of a large number of very small spherical tiny particles, which are identified as molecules. If the thermal energy is much greater than the force of attraction, then we were given the matter in its gaseous state.

Molecules in the gaseous state move at very large speeds and the forces of attraction amongst them are not sufficient to bind them to one place. The fact indicated that the moves are practically independent of each other. Because of this feature, gases are characterized by marked sensitivity of volume change with the change of temperature and pressure.

The molecules of a given gas are completely identical in size, shape, and mass with rapid or random motion. During their motion, they collide with each other and the wall of the container. The pressure of the gas is developed due to the collisions of the molecules with the side of the vessel or container.

According to the ideal gas law, with the decreasing volume, the gas molecule comes closer, or the collision between the gas molecule increases that increasing the temperature and pressure of the gas.

The SI unit of force is newton and the area is meter2, therefore the unit of pressure = newton/meter2 or Pascal.

The standard state of pressure is defined by the quantity bar and 1 bar = 105 N m−2. It can also be expressed by different types of units,

It has four types such as atmospheric, absolute, differential, and gauge pressure in science.