Emulsion in chemistry is formed when a liquid is dispersed in another liquid that is not miscible to each other. Milk is a bright example of emulsion where facts are dispersed in water by emulsifying agents like protein casein. It is a two-phase system of matter like colloids. 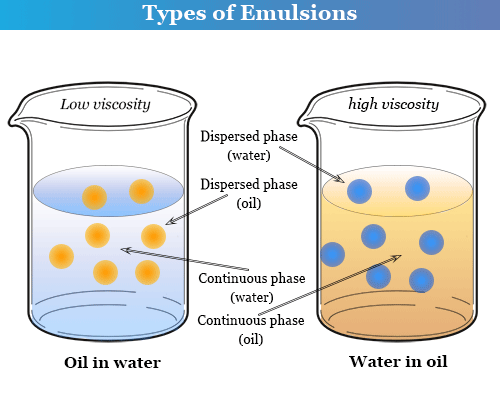 Emulsions are classified into two types,

Here, oil is synonymous with any liquid which is immiscible with water.

Sometimes, an electrolyte is added to the emulsion and the conductance is found to increase, then it is identified as oil in water type.

Generally, an emulsion is stabilized by introducing third substances like emulsifying agents. These agents are three types,

These are the sodium or potassium salts of long-chain fatty acids and sulphonates. They are surfactants that reduce the surface tension between a liquid and another medium and are used as emulsification agents.

These are basic sulfates of iron, copper, or nickel, lead sulfate (PbSO4), iron (III) oxide or ferric oxide (Fe2O3), etc. The emulsifying agents tend to decrease the surface tension at the oil-water interface to facilitate the formation of globules or droplets.

Milk is an emulsion of fat in water (oil in water type) and stabilizes by emulsifying agent casein protein.

The behavior of emulsion in the absence of emulsifying agent resembles that of lyophobic sols. They show the Tyndall effect, Brownian motion, low viscosity, electrophoresis, etc. The globules move towards the electrode (anode) at the mobility of 1 × 10−4 cm2 sec−1 volt−1.

The behavior of emulsion in the presence of emulsifying agent resembles that of lyophilic sols. They are highly viscous, and insensitive to electrolytes. Chemical destruction of emulsifying agents destabilizes the emulsions and it is called de-emulsification.

If soap or detergents are used as emulsifying agents, they can be destroyed by hydrolysis. The physical method like centrifuge or getting used to destroy it.

Emulsifying agent decreases the surface tension at the oil-water interface. It is found that the nature of the substances plays a great role in the formation of different types of emulsions.

The fact can be explained in the following way. Sodium-oleate is preferably dissolved in water and the surface tension of water decreases that facilitating the formation of oil in the water-type emulsion.

What is wind energy? Wind energy or wind power is a natural renewable energy source that uses in wind turbines for the generation of electricity....