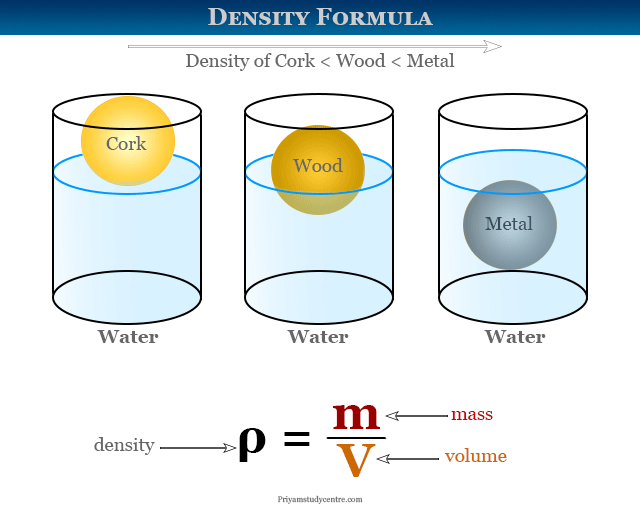 A standard or normal density calculator uses for calculating densities at 0°C and one atmosphere pressure. The CGS and SI units of density are g/cm3 and kg/m3 and dimension [ML-3]. The ideal gas law formula uses to calculate the molar mass and density of ideal gases. It is approximately obeyed under normal temperature and pressure. Therefore, the density measured by the ideal gas equation is not an accurate one.

The ideal gas equation for n mole gases, PV = nRT. From the above equation, P = nRT/V = gRT/MV = ρRT/M. ρ = symbol of the density, M = molar mass of gases. The molar mass of the gas can be experimentally determined by using this expression.

Such density definition or calculation from the above gas equation measured only an approximate and not an accurate one for learning chemistry or chemical science. But the above equation accurately obeyed at very low pressure at P→0. Therefore, the equation is represented as, M = (ρ/P)P→0 × RT, where (ρ/P)P→0 = limiting the density of a gas.

The pressure versus limiting density graph of an ideal gas is shown below the figure, 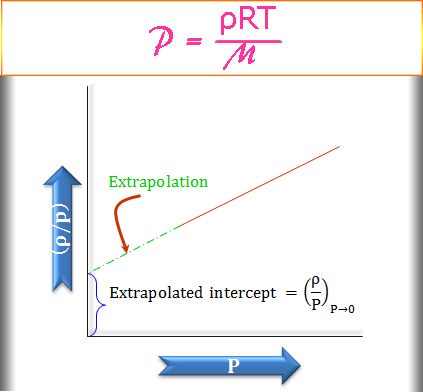 The direct use of the limiting density formula causes some difficulty since, at P→0, ρ→0 and not possible to determine experimentally. Therefore, the above graphical measurement has taken advantage of the calculation of molar mass.

Problem: At 0° temperature, the density of gaseous non-metallic oxide at 2 atm pressure is the same as that of oxygen at 5 atm. Find the molecular weight of the nonmetallic substance.

What is vapour density?

Vapour density of a substance is defined as the ratio of the density of the gaseous substance and hydrogen under the same temperature and pressure. It is the quantity having no unit or dimensions and represented as, D0 = M0/2, where M0 = formula molecular weight of the gases.

At constant pressure due to the dissociation of the chemical bond, the volume of the gases increases with the increase of the mole number. Since mass remains the same and D0 decreases. The extent or fraction of the total number of molecules that suffer dissociation calculates the degree of dissociation. Let us take one molecule of substance A splits up into n molecules of B by the specific heat, A → nB.

At equilibrium for each g mole of A will be (1 – α) g moles of undissociated A and nα g moles of B. So the total number of g moles of gas present = (1-α) + nα or 1 + (n-1)α. When V = volume occupied per unit volume of gas or vapour and D0 define the density measurement absence of any dissociation. If D denotes the observed density when actual dissociation occurred and the total weight of the gas = W.

The above expression shows that, at high temperature, α = 1 (complete bond dissociation) and for NH4Cl, and PCl5, n=2. Thus, the density, D = D0/2. The above formula is used to calculate the degree of dissociation.

What is Kinetic Theory of Gases? Kinetic theory of gases and kinetic gas equation first-time developed by Bernoulli in 1738 to derive the molecular properties...