Gases are the state of matter in which molecules are far apart from each other and characterized by a lack of definite volume and density. Boyle’s law, Charles law, Avogadro law, Gay Lussac law, ideal gas law, and Graham’s law provide the relation between mass, pressure, volume, temperature, and density of ideal gas molecules. 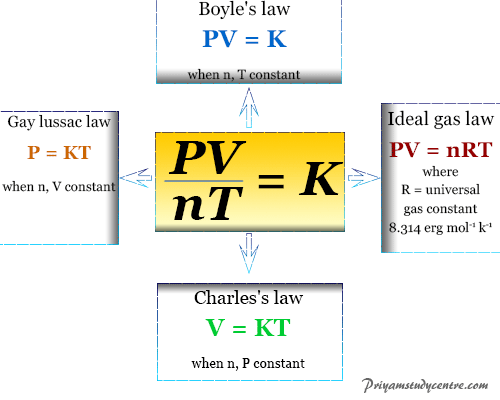 Careful experiments show that the ideal gas laws are only approximately obeyed by different gases. The gases which do not obey these laws are called real gases.

The physical properties of gases are very simple and identical for all gases. These properties of different gases are evident from the fact that all gases generally obey some simple or common gas formula or relation. These are called gas laws.

In learning chemistry or physics, Boyle’s, Charles, Avogadro, Gay Lussac, and Graham’s laws are common laws that derive the formula of ideal gases. After knowing these experimental ideal gas laws, a theoretical model-based structure of gases was developed by kinetic theory gas equation.

What is Boyle’s Law?

At constant temperature and 1 atm pressure, a cylinder contains 10 ml of methane or hydrogen gas. If the pressure increases to 2 atm then according to Boyle’s law volume decreases to 5 ml.

According to the definition of Boyle’s law
V ∝ 1/P, when temperature (T) is constant
or PV = K = constant for a gas.

The value of the gas constant depends on the nature and mass of the gas molecules. For a given mass of gas, if the volume V1 at pressure P1 and volume V2 at pressure P2. Therefore, according to Boyle’s Law,
P1V1 = P2V2.

The relation between pressure and volume of gas can be represented by an arm of a rectangular hyperbola graph given below the picture, 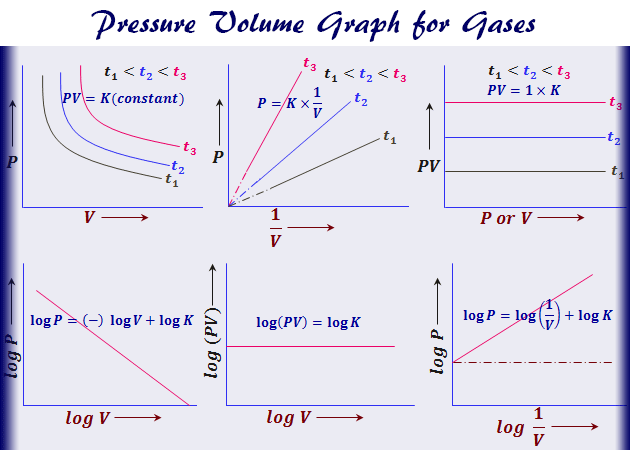 Therefore, at a constant temperature, the density of a definite mass of gases is proportional to its pressure.

What is Charles Law?

It is convenient to use the absolute temperature scale on which temperature is measured in Kelvin. Hence the reading on this scale was obtained by adding 273 to the Celsius value. Therefore, TK = 273 + t°C.

Since V0 = initial volume = constant at a given pressure. Hence the above relation is expressed as,
Vt = K2 T, where K2 = constant

According to this gas formula, Charles Law states as, at constant pressure, the volume of a given mass of gas is directly proportional to its kelvin temperature.

A typical property of the volume of gases with a change in its kelvin temperature is a straight-line isobar graph obtained. Thus the general term isobar, which means constant pressure assigned to these plots.

What is absolute zero temperature?

Since volume is directly proportional to its kelvin temperature. Thus the volume is theoretically zero at zero kelvin or – 273 °C. This is hypothetical because the molecule of our environment has physical properties to form liquid and then solid before this low temperature of the gas is reached.

In reality, no substance exists in gases at this temperature near kelvin zero. For the liquefaction of real gases, we must maintain critical temperature.

According to the above formula, at constant pressure, the density of a given mass of gases is inversely proportional to its temperature.

What is Avogadro’s Law?

The volume of gas depends not only on the quantity of the gas but also on its pressure and its temperature. It is common knowledge that at any given temperature and pressure, the volume of a gas will be directly proportional to the quantity.

In 1811, Avogadro discovered the Law of gases is called the Avogadro law. According to the law, measured at a common temperature and pressure, the volume of the same number of g moles of different numbers of gases would be the same.

When all the variables are taken into account the variation rule states,
PV = KT

All gases have properties to obey the gas laws formula under all conditions of temperature and pressure. For real gases, the Van der Waals equation is needed to explain the properties of gases.