Polymers in chemistry are big molecules made by the repeated joining of simpler molecules by covalent bonding. They are macromolecules and complex molecules having a very high molecular weight of the order of 103 to 106. When two compounds have the same empirical formula but differ in molecular weight, the more complicated compound is called a polymer of a parent monomer. Rubber, protein, cellulose, nitrocellulose, nylon, bakelite, perspex are common examples of polymers. The terms polymer and polymerization are used mainly for high molecular weight compounds. Polymers may be classified into three groups like natural, semi-synthetic, synthetic polymers. 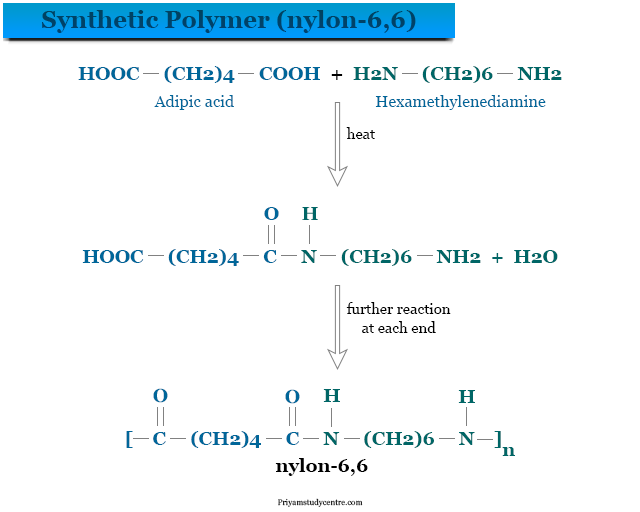 As the investigation of polymerization reaction progressed, it is found that many compounds formed by a large number of monomer molecules with high molecular weight do not contain exactly the same empirical formula of parent monomer. It led to a modification of the definition of polymer and polymerization. According to Carothers (1931) polymerization is defined as intermolecular combinations that are functionally capable of proceeding indefinitely. There are two main types of polymerization processes like addition and condensation polymerization.

Natural polymers are substances that are obtained from naturally occurring materials like living organisms. These are found mainly in nature. Proteins, gums, resins, silk, rubber, cellulose are common examples of natural polymers.

Nylon or nylon-6,6 is an important synthetic polymer prepared by heating adipic acid with hexamethylene diamine. It can be used widely in textile industries and different types of consumer items.

Neoprene or polychloroprene rubber can be obtained by polymerization of chloroprene. This rubber is resistant to chemical action. Therefore, neoprene can be used for making containers for corrosive chemicals.

Plastics form a group of high polymers which has a fair range of deformability and mouldability. In plastics, polymers formed do not have the same molecule weight and they have different types of applications. The average molecular weight of plastic varies from 20,000 for nylon to several hundred thousand for polyvinyl chloride. Plastics are of main two types like thermoplastic and thermosetting plastics.

How polymer is made?

Commercially important vinyl polymers like polyethylene, polystyrene, polyvinyl chloride, polyacrylonitrile polymer are made by a chain mechanism. There are three types of growth processes for polymerization like free radical, cationic and anionic processes. The formation of a polymer by cationic, anionic, or free radical mechanism involves normally three steps,

The radical R· formed in the chain initiation step adds to the double bond of the vinyl monomer to form the next higher radical. The addition process is continued to produce polymerized radicals.

The chin is terminated when the chin carrier free radicals are destroyed. There are two different possibilities of the chain termination process.

The number average molecular weight of the polymer is equal to the weight of the macromolecular substance divided by the total number of moles present.