Graham’s Law of diffusion and effusion in chemistry is proposed by Scottish physical chemist Thomas Graham in 1948 to study the rate of diffusion and effusion for gases and liquid molecules. According to Graham’s law, At constant temperature and pressure, the rates of diffusion or effusion of different gases are inversely proportional to the square root of their densities. Let at constant temperature and pressure, the rate of diffusion or effusion of the gas molecules = r and density = d. According to Graham’s law, r = k/√d, where k is a gas constant. 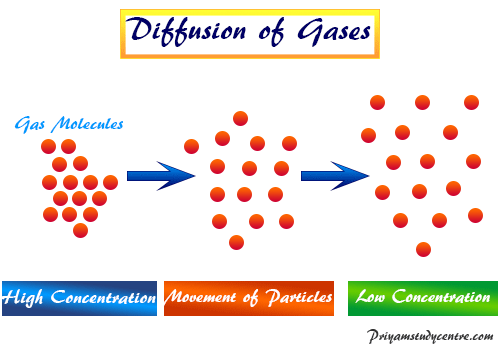 Effusion is the process in which a gas passing out through a pinhole in the wall of the container with a very small diameter. The diameter of the pinhole is less than that of the mean free path of the gas molecules. The escape of the gas is due to the pressure difference between the container and the outer environment. In learning chemistry or physics, the rate of effusion is used for the calculation of density, pressure, and temperature of the gases.

How to calculate rate of diffusion?

Let at constant temperature and pressure, r1 and r2 be the rates of diffusion of two gases having molar mass M1 and M2 and densities d1 and d2. According to Graham’s law, r1/r2 = √d2/√d1. But the density of the gases is proportional to the vapor density or density(d) ∝ vapour density (D). Again we know that molecular mass = 2 × vapour density or M = 2D. Therefore, r1/r2 = √M2/√M1. This formula is used to calculate the rate of diffusion in terms of the molecular weight of gases.

Diffusion of ammonia and hydrogen chloride

How to calculate rate of effusion?

Let at constant temperature and pressure t1 and t2 be the time required for passing the same volume (v) of the two gases through the same pinhole. v/t1 = r1 and v/t2 = r2. Therefore, r1/r2 = t2/t1 = √d2/√d1. The temperature and pressure are fixed and the molar volume vm of both the gases is the same. Therefore, r1/r2 = t2/t1 = √M2/√M1. These two formulas are used for the calculation of the rate of effusion in terms of densities or molecular weight.

Problem: At constant temperature and pressure, 432 ml and 288 ml be the volume of the two gases passing through the same pinhole with the time 36 min and 48 min respectively. If the molar mass of one gas is 64 gm mol-1, how to find the molar mass of another gas by Graham’s law? 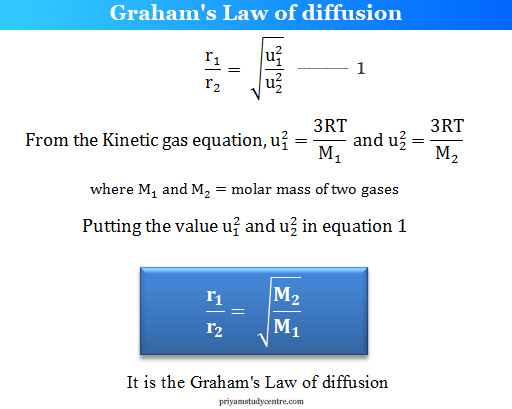 Application of Graham’s Law of diffusion

Graham’s Law is used for the following purposes,