What is paper chromatography? 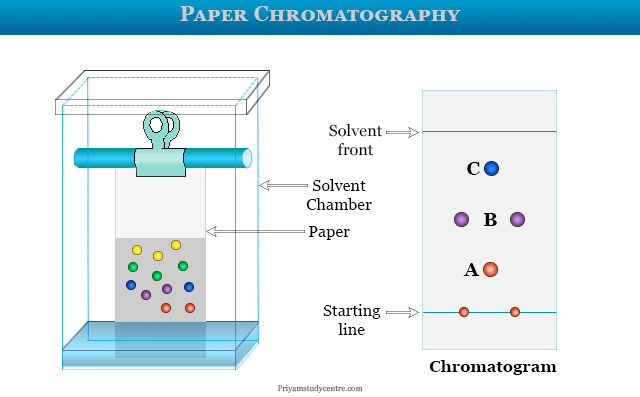 What is Rf value?

A paper chromatography experiment is used for the identification or separation of individual amino acids from a mixture of amino acids.

A line parallel to the short end of the chromatography paper sheet is drowned by a pencil about 10 cm apart. Two points are marked on the Whatman filter paper strip. The mixture of amino acids is spotted on one mark with no more than 5 mm diameter. Similarly, the second mark is spotted by the standard solution of glycine. The spot is allowed to dry. 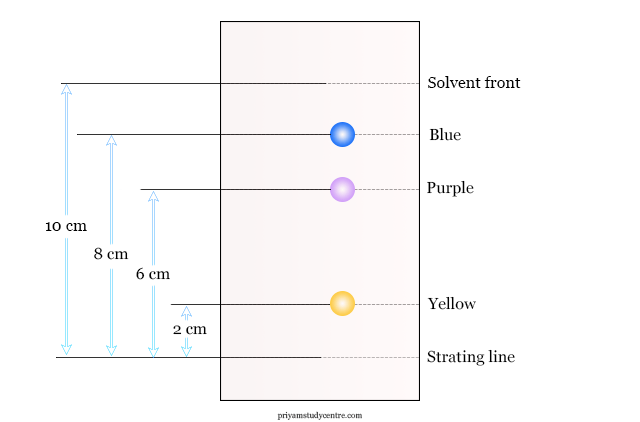 The developing solvent is placed in a clean dry glass chamber of a paper chromatographic instrument. The glass chamber is covered with a glass plate having a hole in the middle.

The paper strip hangs from a wire hook dipped into the solution where the spots are just above the solvent front. The solvent rises owing to capillary action on the paper strip. When it almost reaches the point of suspension from the wire hook, the paper strip is carefully taken out from the chamber.

The position of the solvent front on the paper strip is marked. The paper strip is allowed to dry and the ninhydrin reagent spread lightly but uniformly. The strip is then heated in an oven at 105 °C for five minutes and the position of spots is marked. The yellow spot is identified as proline. The spot which moves parallel to the spot of glycine is identified as glycine. The other blush purple spot is phenyl aniline.

There are three main types of paper chromatography such as descending, ascending, and circular type.

It is used mainly for the identification of substances such as amino acids, sugars, dyes, etc. The separations by the paper chromatography principle are possible because of the continuous partitioning of substances between the aqueous phase and organic mobile phase running down the paper. Solute migration initiated from a small narrow spot. Surface tension is the driving force for capillary action. Therefore, a liquid-liquid partition is predominant in the mechanism of paper chromatography.

The practical application of the paper chromatography technique for the identification of sugars such as glucose, fructose, and sucrose is given below,

Setting the ascending paper chromatography instrument. Identify the spot developed in the chromatogram.