Chromatography techniques in analytical chemistry were applied to coloured components at the initial development of the chromatography principle. The name chromatography originated from colour but today it is applied also to colourless compounds. 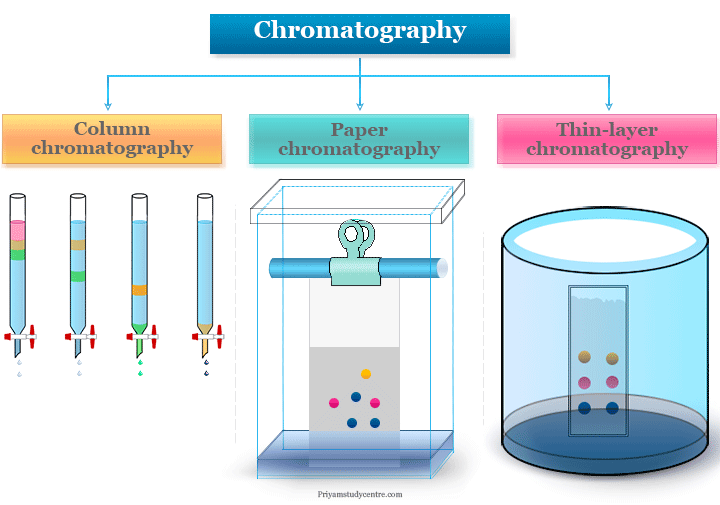 Chromatography is based on the principle where molecules are transferred between the mobile phase and the stationary phase. It occurs due to the absorbance or partition of molecules present in the mixture which we want to separate.

The rate of travel of individual solute molecules through a column or thin layer is not uniform. It is directly related to the partition of the molecules between the mobile phase and stationary phase.

The stationary phase may be a column, plate, or paper in chromatographic technique. It is a solid phase or a liquid phase coated on the surface of a solid phase. 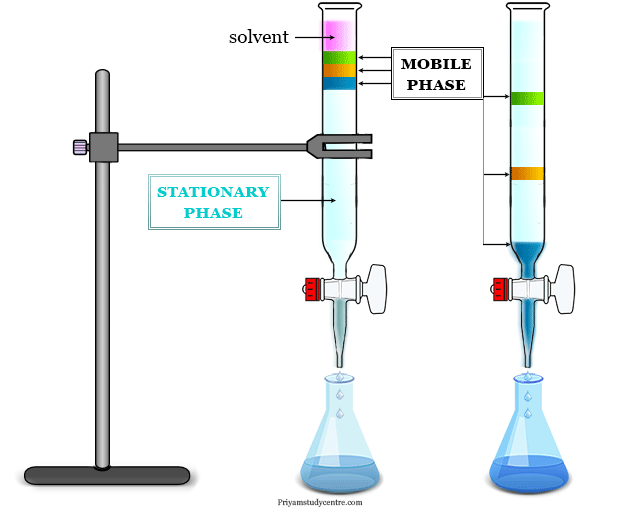 Depending upon the nature of the stationary phase, three chromatographic techniques have been used widely in the laboratory. These techniques are,

The mobile phase (liquid or gas) moves through the stationary phase when different components are separated due to different rates of migration.

Separation techniques cannot contain one type of property. We classify columnar techniques like distillation, solvent extraction, and ion exchange in one class. They can also be classified according to the migration ions.

Based on physical properties and phase separation, chromatography techniques are the following types,

The classification of different types of chromatographic techniques or methods is very simple according to the mobile and stationary phases. The mobile phase can be gas or liquid while the stationary phase can be liquid or solid. Therefore we have liquid-liquid, liquid-solid, and gas-solid combinations.

The modern types of chromatographic methods can be classified in the following ways given below the table,

The high-performance liquid chromatography (HPLC) technique is highly instrumental. Therefore, we cannot conclude HPLC in this classification. A short description of the most familiar types of chromatographic techniques or methods is given below the articles,

Various fatty acids can be easily separated by the adsorption technique. The separation of noble gases on active charcoal can be done by gas-solid adsorption chromatography.

It is the largest technique of chromatography. All the techniques like LLPC, PC, TLC, GLC, and RPPC have belonged under the partitioning technique.  In liquid-liquid partition chromatography, separation is affected by the distribution of the samples between a stationary phase and a mobile phase which has limited miscibility.

It was discovered by Thomas and Way in England. The exchange of sodium and calcium in soil to form sodium or calcium aluminum silicate indicate the phenomena of ion exchange.

We widely used the ion-exchange technique in several operations in our daily life such as water softening, metal separation, radiochemical separation, etc.

The exclusion technique has been divided into the following categories,

Electrophoresis is a technique of separation of constituents under the influence of an electric current due to differences in the migration rate of ions.

The methods which used columns, plates, or capillary tubes are called electrophotographic methods. The electrophoresis technique can be classified into the following categories,

The formation of a specific dissociable complex with biomolecules such as enzymes, hormones, antibodies, DNA, RNA, proteins, and amino acids is the basis of the affinity technique.

We used the affinity technique for the isolation and purification of biological macromolecules. For example, isolation, and analysis of insoluble stretch substances, enzymes, proteins, and antibiotics are carried out by affinity chromatography.