Ethanol or ethyl alcohol is a colorless, inflammable simple alcohol or organic compound used as a fuel and solvent in chemistry. It is also called grain alcohol or drinking alcohol. The molecular formula of ethanol is C2H6O but it can be written as C2H5OH or CH3CH2OH or EtOH. 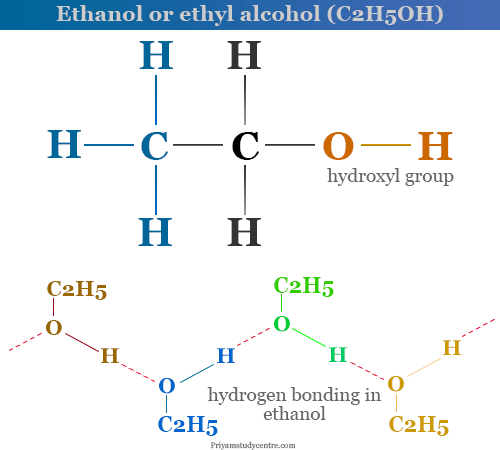 These two acids readily distinguish each other. Formic acid reduces ammonical silver nitrate and the salts of many heavy metals but acetic acid does not participate in this reaction.

Analysis and molecular weight determinations show that the molecular structure of ethanol is C2H6O. The carbon atom in the ethanol molecule is quadrivalent or sp3 hybridized while the oxygen atom is bivalent and hydrogen is univalent.

Industrially, ethyl alcohol is prepared from ethylene which is obtained from creaking petroleum.

It is also manufactured by direct hydration of ethylene with the steam under pressure in presence of suitable chemical catalyst like phosphoric acid. A small amount of ether is formed as a by-product of this method.

Stretch is the starting material for the production of ethyl alcohol. Wheat, barley, and potato are the common sources of starch.

The carbon dioxide obtained by the fermentation process is recovered as a by-product.