Polarity of bonds and polar molecules

Polarity of bonds and polar molecules are formed by the asymmetric charge distribution on chemical bonds. Water, hydrogen chloride, ammonia, nitrobenzene, and alcohol are common examples of polar molecules. 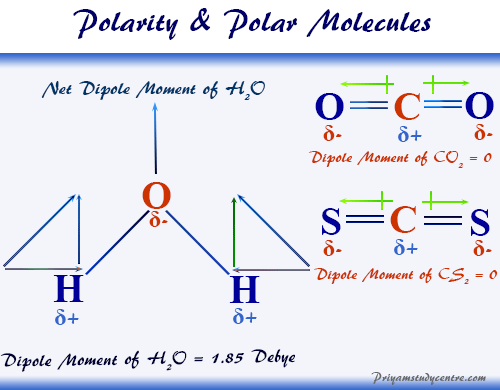 The electric polarization of chemical substances arises when non-polar molecules are placed between positive and negative plates of the electric field.

The polarity of the molecule is quantitatively expressed by the term dipole moment. It helps to determine the molecular size and shape, spatial arrangement, bond polarity, bond energy, and residue charge on the atoms.

Binary homonuclear diatomic molecules are non-polar or polarity equal to zero because the bonding chemical elements possess the same electronegativity.

The polarity of homonuclear diatomic molecules like hydrogen, nitrogen, oxygen, chlorine, bromine, and iodine is zero. The bonding electrons of these molecules are shared equally by the two nuclei. These types of bonds are called non-polar covalent bond.

According to the above rule heteronuclear diatomic molecules show polarity due to their electronegativity and ionization energy differences.

The electronegativity difference is not only the tool to determine the polarity of the molecule. Therefore, to decide the polarity of heteronuclear molecules need to learn the composition and geometry.

What is polarity in chemistry? 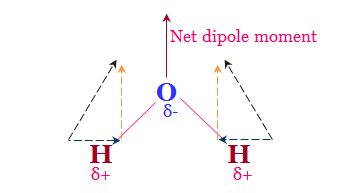 One s- and three p-orbitals of oxygen combine to form sp3-hybridized orbitals. Therefore, a water molecule is formed by the tetrahedral arrangement of two lone pairs and two two bond pairs.

For calculating the polarity of water, we find two contributions like electronegativity difference between oxygen and hydrogen and lone pairs of electrons.

How to determine bond polarity?

Determination of dipole moment and polarity is given by the product of charge and distance of the separation or bond length.

When +q amount of positive charge separates by −q of negative charge and l is the distance between two centers of the molecule, dipole moment,
µ = q × l

Perfectly non-polar substances show zero dipole moment and polar molecules have positive values. The determination of the dipole moment helps to predict the polarity of the molecule.

Question: P-F, S-F, Cl-F, and F-F which of the following chemical bonds show the lowest polarity?

Answer: The electronegativity or electron affinity difference between the two fluorine atoms is equal to zero. Therefore, the dipole moment of the fluorine among these molecules is zero.

All the saturated hydrocarbons of our environment like methane, ethane, propane, and butane are found to be non-polar or zero polarity.

The non-polar character of methane is easily understood from the symmetrical tetrahedral structure with the carbon atom at the center and four identical valencies making an angle of 109.5°.

The experimental calculation of the bond moment or polarity of the alkyl group = 0.04 debye equal to the bond moment of the carbon-hydrogen bond. Not only alkyl groups but the radicals have also definite chemical bonding moments called group moments.

When a hydrogen atom in a different saturated hydrocarbon is replaced by a hydroxyl group to produce homologous alcohols, all of the latter should have the same polarity but the molecules are polar.