What is mass spectrometry?

Mass spectrometry (MS) is an analytical principle that uses for the analysis of charged gas molecules (ions) according to their weight or masses. It is nothing to deal with spectroscopy but the name was chosen due to the similarity between photographic records and optical line spectra. 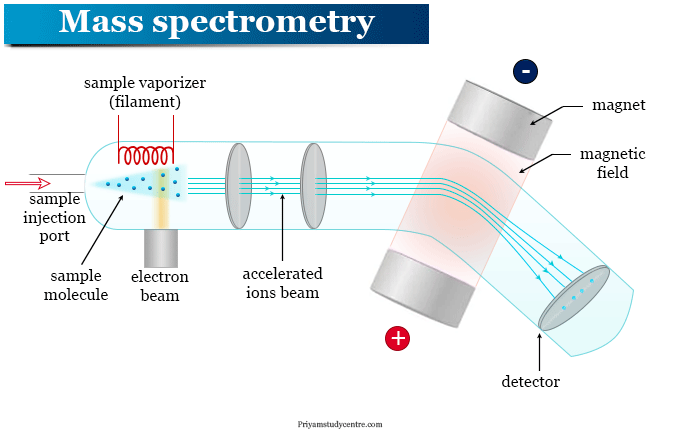 Generally, a mass spectrum is obtained by converting the compound of a sample into rapidly moving ions and resolving them on the basis of their mass to charge ratio (m/z) by a mass analyzer.

In mass spectrometry instrumentation or applications, the sample is bombarded with a beam of electrons which produces an ion-molecule or ionic fragments of the original species.

Polymers and natural products have low vapor pressure but on pyrolysis, the decomposition products can be analyzed by a mass spectrometer. Mass spectrometry is used widely in organic chemistry to characterize organic compounds in two principal ways,

The function of the mass analyzer in a mass spectrometer is just like a prism or monochromator which does in spectrophotometry. 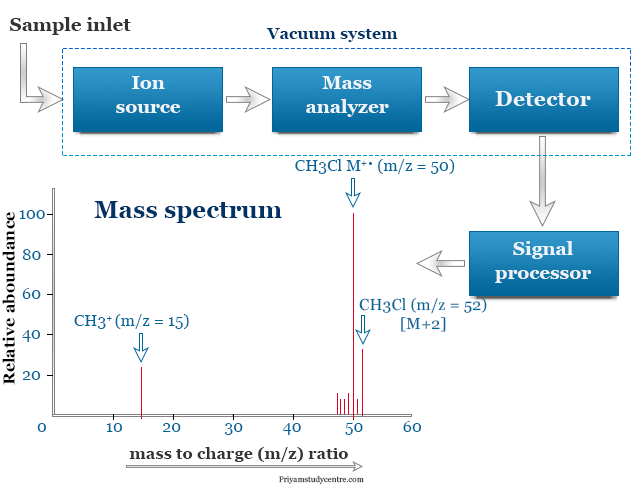 A sample handling system is used to introduce a sample into a gaseous ion source at low and reproducible pressure. For less volatile samples heating or vaporization is necessary.

Nonvolatile and thermally unstable compounds can be introduced into ion sources by a sample inlet system that is equipped with a heater for volatile samples at low pressure.

Ion source in mass spectrometry converts molecules into gaseous ions. The most common way for the production of ions involves bombarding the sample with a beam of energetic electrons from an ion gun. The electron impact source causes fragmentation of the molecules to form a large number of positively charged ions with various masses.

In the chemical ionization chamber, methane is introduced into the electron beam source at 1 torr pressure. Interaction of the electron beam with the reagent gas produces a host of ions such as CH5+, CH4+, CH2+, etc. CH5+ is a strong proton donner that further reacts with analyte samples like MH to form MH2+.
CH5+ + MH → MH2+ + CH4

A spark source is also used for ion formation from non-volatile inorganic samples.

Single-focusing mass analyzer in mass spectrometry instrumentation contains a single magnetic sector that is used to generate a magnetic field. It can be differentiated ions based on their m/z values or according to their momentum.

In a double focusing mass analyzer, a very high resolution is possible if all ions have the same m/z with the same velocity. Here the beam is passed through a radial electrostatic field. The field has an effect on focusing particles with the same kinetic energy.

In time to flight mass analyzer, all the ions leave from an accelerating field with the same kinetic energies but different velocities depending upon their masses. In magnetic focusing, ions are separated by changing their directions. When they float in a straight line through a field-free region, they required different times to travel a given distance.

A quadrupole mass analyzer contains short parallel metal rods arranged around the beam. The combined field causes the particle to oscillate about their central axis where they travel. The oppositely placed electrodes are connected together and a DC voltage is applied.

The ion beam which can be detected and measured is of the order of 10−15 to 10−5 amps. Photographic plates are used for the detection of ion beams in the mass spectrometer. The collector electrode is well shielded from stray ions and the recorder record peaks of all sizes.

How does mass spectrometry work?

Mass spectrometry principle works by bombards a natural sample of a volatile molecule (M) with high-energy electrons or electrons of energy greater than ionization energy. On electron impact, the molecules are energized sufficiently to eject an electron. The process lead to the formation of a radical cation symbolized more accurately by M+· or M+ in simplification.

Fragmentation of the molecular ion reaches a substantial proportion only at higher bombardment energies (70 eV). The resulting positively charged particles accelerated into a bent chamber surrounded by a magnetic field. Varying the strength of the magnetic field, the radius of the curvature changes depending largely on the mass of the ions and the strength of the fields. Therefore, ions are separated on the basis of m/z values.

Each positive ion formed directly or by fragmentation of the original molecule has a unique mass/charge ratio. It can be recorded on graph paper to give the mass spectrum of each component.

The identification of an unknown compound is possible in a mass spectrometer by calibration of the known compound like mercury vapor. It is also useful for quantitative analysis of mixtures containing closely related compounds.

Recently, mass spectrometers are used for the analysis of both inorganic and organic mixtures with low volatility.

Mass spectrometry is applicable in different fields of science like forensic toxicology, metabolomics, proteomics, pharma or biopharma, and clinical research.

The association of gas chromatography and mass spectrometry techniques gives a powerful method for structure determination of natural and synthetic mixtures in nano-gram quantities. It can be used during the Olympic games for stimulants, narcotics, and anabolic tests.

It can be also used for the analysis of polymeric compounds and complex petroleum products like paraffin, cycloparaffin, olefin, cycloolefin, and alkyl benzenes. Therefore, gas chromatography-mass spectrometry combinations are used to characterize the properties of fuels and lubricating oils.

How wavelength is measured? Wavelength can be measured by the distance between two successive maxima of a wave. It can be denoted by the symbol...