What is oxalic acid?

Oxalic acid or ethanedioic acid (chemical formula C2H2O4) is a poisonous, crystalline, dicarboxylic acid that is present in rhubarb, sorrel, and other plants of the oxalis group. It occurs as a dihydrate with the molecular formula C2H2O4, 2H2O. It is used widely as a cleaning or bleaching agent for the removal of rust or stains. 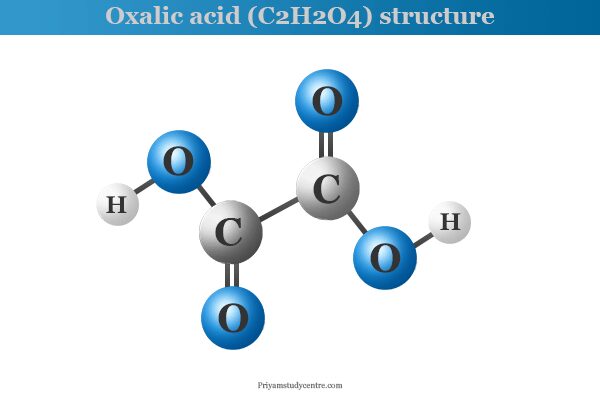 Oxalic acid crystallizes from water as a colourless crystal dihydrate with two molecules of water. The melting point of dihydrate is 101.5 °C but the meting point of anhydrous oxalic acid is 189.5 °C. It is soluble in water and ethanol but almost insoluble in ether.

Oxidation of many organic compounds like sugar and starch with nitric acid is used for the production of oxalic acid.

The most common individual uses of oxalic acid are given below,

It is a useful bleaching agent for wood and stone. When wood or stone turns gray, we used oxalic acid to bring back its natural colour.

It is useful for removing rust caused by iron, water, and tannic acid. It is used for cleaning or removing iron rust due to the formation of water-soluble iron salt with ethanedioic acid.

It is very effective for removing stains caused by ink, and different types of food. Ethanedioic acid removes the stain gently but does not affect the base surface. It is also used for removing strain from linen or cotton clothes.

In the laboratory, ethanedioic acid can be prepared by oxidizing sucrose or molasses with concentrated nitric acid in presence of vanadium pentoxide as a chemical catalyst.
C12H22O11 + 18 [O] → 6 (COOH)2 + 5 H2O

Oxalic acid is a poisonous acid that crystallizes from water to form colorless dihydrated crystals with the molecular formula C2H2O4, 2H2O. The hydrate loses water when heated at 100 to 105 °C.

When heated above 200 °C, it decomposes to form carbon dioxide, carbon monoxide, formic acid, and water.

The anhydrous ethanedioic acid is easily obtained by heating hydrate with carbon tetrachloride.

For better production of glyoxalic acid, we used reagents like magnesium and sulfuric acid.

The pure concentrated form of oxalic acid is very toxic or dangerous. It is corrosive and harmful if inhaled. It affects mostly the mucous membranes and upper respiratory system of our body.

What is ozone gas? Ozone gas is a triatomic allotrope of oxygen with the molecular formula O3. It is an important constituent of the upper atmosphere...