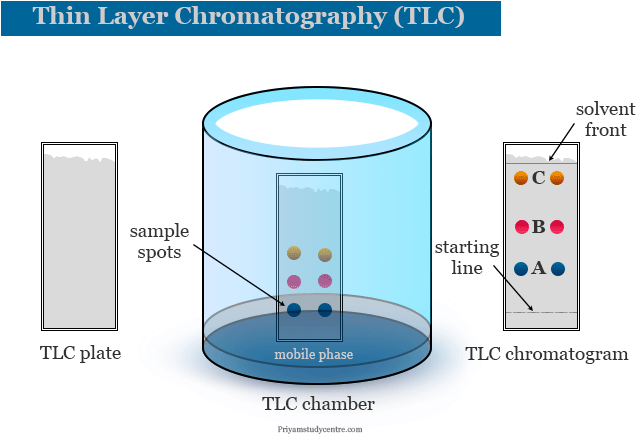 In TLC technique, the adsorbent is coated on a glass plate which acts as a stationary phase. Usually, we used alumina or silica gel with little calcium sulfate for the production of thin layer chromatography plate.

The solvent or mobile phase which we used in thin layer chromatography is a very impotent step. Compared to other chromatographic techniques, it is applicable for quantitative analysis of samples.

The choice of solvent system and composition of thin layer plate determined the principle of TLC chromatography. The solvent used in the TCL technique should be nonpolar and volatile. The eluting powers of the common solvents are,

TLC plate is a glass plate that has three different sizes as 25 × 75 mm, 5 × 20 cm, and 20 × 20 cm. We used alumina or silica gel with little calcium sulfate for the coating of TLC plates. Cellulose powder and diatomaceous earth can also be used for coating TCL plates.

Photodensitometry plates are also used for quantitative analysis. Such analysis can be carried out by UV, visible and IR, or fluorescence spectrophotometry. Two methods are generally used for the preparation of TCL plates.

Generally, 1 to 2% solutions are applied by a capillary tube or a microsyringe at about 1.5 to 2 cm from the edge. The spot must be 1 cm apart from each other.

When the spot becomes dry, the plate is put into the chamber which contains a suitable solvent with its saturated vapour. The absorbent layer must be under the solvent and spots must be above the solvent. When the solvent front travels at least three fourth of the length of the plate, a chromatogram is developed.

It is useful for the analysis or identification of amino acids, dyes, and ink. A new technique like high-pressure thin layer chromatography (HPTLC) is applied for pharmaceutical analysis.

Identification and analysis of an individual amino acid from a mixture of amino acids can be done by thin layer chromatography experiment.

How wavelength is measured? Wavelength can be measured by the distance between two successive maxima of a wave. It can be denoted by the symbol...