What is nuclear fusion?

Nuclear fusion is a nuclear reaction where very light nuclei of chemical elements could be joined or fused to form heavier elements by the emission of energy or loss of masses. In the nuclear fusion process, if two protons and two neutrons would be fused or two deuterons would be united, the produced energy is very large about 1.2 MeV. 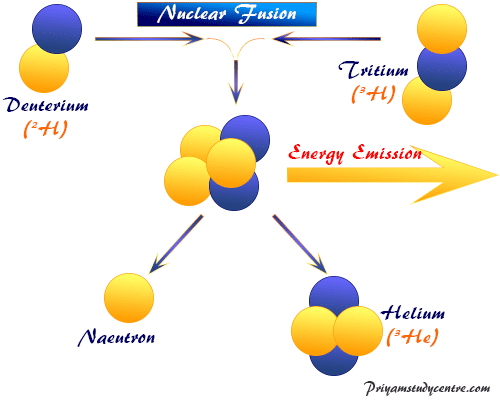 Nuclear fusion technology work to overcome the repulsive barrier in the fission reactor of the nuclear power plant. The nuclear fusion reaction that occurs in the interior of the sun and stars is the source of solar stellar energy.

Fusion technology or formula was first initiated in the second World War for the preparation of thermonuclear weapons and hydrogen bombs.

Today, fusion technology is used in the nuclear reactor of power plants for electric or nuclear power generation in peaceful applications to mankind.

Nuclear fusion in the sun

The above net fusion or thermonuclear reaction occurs in the interior of the sun or decent star of our solar environment where the temperature is of the order of twenty million-degree Celsius.

The calculated energy output during the nuclear fusion reaction in sun loses the mass at the rate of four million tons per second. Even with this huge mass loss, our sun will continue to bless us with a good earth solar environment for thirty billion years.

How does nuclear fusion work?

Thermonuclear bombs like hydrogen bombs work through the nuclear fusion process. The condition to create hydrogen bombs has been not reviled. The common fusion process in chemistry or physics works through joining or fusing neutrons, deuterium, or tritium (atomic number =1 and mass number = 2 or 3) by the liberation of a huge amount of heat or energy.

The energy released in the fusion of nuclei originates from the fact that the loss of mass occurs in the artificial nuclear reaction. Energy release in the fusion process can be calculated from the mass defect and Einstein’s mass-energy equation. It can be used to overcome repulsive barriers in the fission process.

In the bomb, there is a small core of plutonium fission detonator. It is surrounded by a thick cover of fusible material which turns to enclosed by uranium. The fast neutrons produced from the fusion process lead to the fission of surrounding uranium. The fusion process is not controlled by critical size. Therefore, very large hydrogen bombs are produced by this process.

Nuclear fusion energy is the amount of energy released during the fusion reaction. It can be calculated from the mass defect.  Let us take the nuclear transformation,
21H1 + 20n1 → 2He4

Difference between fission and fusion

In learning chemistry or physics, stellar energy means the continuous emission of enormous amounts of energy from the sun and other stars due to the fusion process.

The temperature of the interior of the stars is of the order of 107 to 108 K. Such temperature was attained during the construction of the original gaseous nebulae. At such high temperatures, the atoms are completely stripped of their electrons. The bare nuclei with extremely high thermal energy fuse together at a rapid rate which is reasonable for the colossal output of energy.

In 1938, Bethe and Weizsacker independently proposed a theory in which 4 helium nucleus is formed in the stars or sun. The fusion of four protons in a series of changes through the isotopes of carbon, nitrogen, and oxygen.

Therefore, the nuclear fusion process is the main source of solar stellar energy.