Radioactivity is the phenomenon of emission of radiations as a result of the spontaneous decay of alpha, beta, and gamma particles from heavy atomic nuclei in the form of energy. 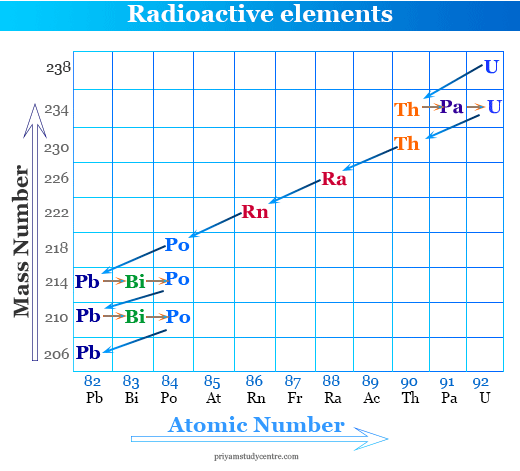 Millicurie and microcurie are another units of radioactivity expressed by 3.7 × 107 and 3.7 × 104 disintegrations per second. The radioactive phosphorus-32, the beta emitter, has an activity of 50 millicuries per gram means every gram of phosphorus-32 is 50 × 3.7 × 107 decay taking place per second.

He obtains the conclusion that some particles emitting from the uranium compound could shield the cover of the photographic plate. The properties of alpha, beta, or gamma rays radiations were very similar to those of x -rays.

On April 20, 1902, Marie and Pierre Curie successfully isolate radioactive radium and polonium from ore pitchblende. Polonium or radium was much more radioactive than uranium. Therefore exceptional behavior of pitchblende was explained by this discovery.

In 1903, Pierre Curie was awarded the Nobel Prize in physics for her discovery. She shared this with Henri Becquerel and Marrie curie for their contribution to developing radioactivity.

In 1906, Pierre Curie died in a Paris street accident. After death, Marie won the Nobel Prize in chemistry for the discovery of the elements polonium and radium.

In learning chemistry or nuclear chemistry, the below graph is obtained by plotting the number of neutrons in the nuclei of stable isotopes against the respective number of protons. 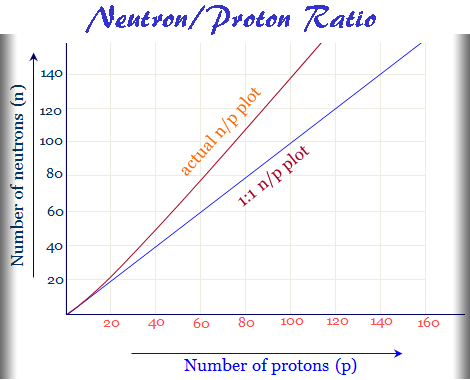 The above plot shows that the actual n/p plot of stable radioactive isotopes breaks off from the hypothetical 1:1 plot around an atomic number 20.

After atomic number 20, the line rises rather steeply. As the number of protons increases inside the nucleus, more and more neutrons are needed to minimize the proton-proton repulsion. Therefore, neutrons are served as the binding materials inside the radioactive nucleus.

Neutron to proton ratio too high

Isotopes with too many neutrons in the nucleus can attain greater stability if one of the neutrons decays to form a proton. Such disintegration leads to the emission of an electron or beta rays,
0n1 → 1H1 + -1e0 (beta rays)

The neutron/proton ratio is high when the mass number of radioactive isotopes is greater than the average atomic weight of the element.

Neutron to proton ratio too low

A nucleus with a neutron to proton ratio too low attains nuclear stability by converting one proton to a neutron. Such a nuclear reaction is achieved either by the emission of a positron or by the capture of an electron. It occurs with a radioactive isotope whose mass number is less than the average atomic weight of the element.

The neutron/proton ratio for stable radioactive isotopes of carbon-12 = 1.0 with six protons and six neutrons. But for radioactive carbon-14 = 1.3 with eight neutrons and six protons. Therefore, caron-14 will show radioactivity by emitting beta rays from the nucleus.

The neutron/proton ratio for iodine-127 and iodine-133 = 1.4 and 1.5 respectively. Therefore, iodine-133 is a beta emitter largely used in nuclear medicine.

A nucleus deficient in neutrons will tend to attain nuclear stability by converting one of its protons to a neutron and this will be achieved either by the emission of a positron or by the capture of an electron. Positron emission occurs with light-type of radioactive isotopes which have a very low atomic number.

The effect of nuclear transformation resulting from the electron capture is the same as that with the positron emission reaction in radioactive transformation.

In both cases, the proton in the nucleus is converted into the neutron. The energy emission in such radioactive nuclear transformation is given the electromagnetic spectrum like x-rays.