What is nuclear fission?

Nuclear fission is a nuclear reaction where a heavy nucleus of an atom is split spontaneously to produce two or more smaller fragments by the release of energy. The process of nuclear fission released a large amount of energy which we used to create electricity in nuclear power reactors or produce atomic bombs. 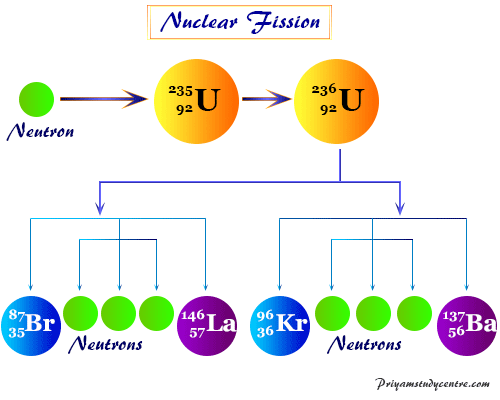 In nuclear chemistry, the process of nuclear fission is spontaneous or works through the excitation of the nucleus by the particles like neutrons, protons, deuterons, or alpha. It is also excited by electromagnetic radiation obtained from gamma rays.

In 1934, Italian physicist Enrico Fermi and his collaborators were engaged in studying neutron-induced radioactivity on heavy atoms. They study the chemical elements having an atomic number greater than 92.

They observed that such a type of nuclear reaction produced two atomic nuclei with different atomic numbers. These fragments are widely different from the nucleus of uranium. Therefore, uranium-235 is splitting or fission to form smaller fragments.

Uranium-235 is split by slow or thermal neutrons to release the energy of 0.3 MeV. It is also split by a fast neutron to produce 1 MeV energy.

Nuclear fission reactions are accompanied by the release of a large amount of energy due to mass defects. The mass defect is converted to energy. It can be described by the Einstein relativity equation, E = mc2. 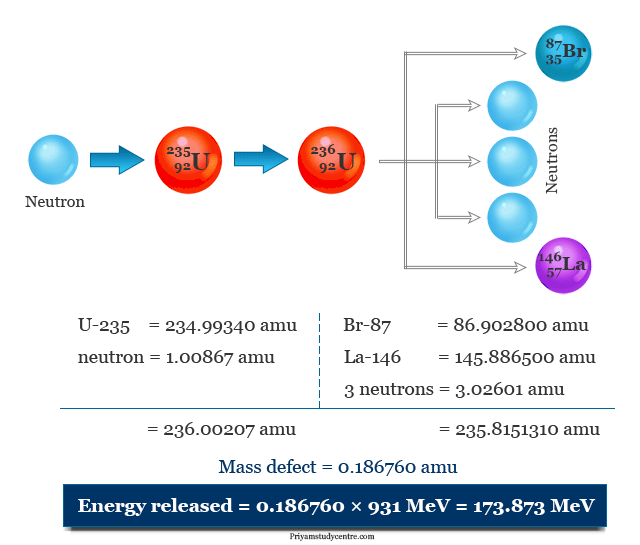 During fission, some neutrons are lost. These neutrons can be sustained further nuclear fission by developing a chain reaction. Therefore, fission can release a huge amount of energy.

The nuclear fission of each heavy atomic nucleus releases 2 to 3 neutrons. When a small number of uranium-235 split up, the neutrons produce an infinite number of fusion reactions. Therefore, it leads to the form of a nuclear chain reaction. The chain reaction work through the emission of a large amount of energy.

How does an atomic bomb work?

The atomic bomb works by bombarding U-235 with neutrons. For every fission process produced approximately 200 MeV energy.

If we use a small piece of U-235, the produced neutrons will be escaped and the chain will be broken up. Therefore, there is a limit or critical size of the target for the production of energy by chain propagation.

If the size is below the critical size, there will be no explosion and the fission process is safe. For large species from which the secondary neutron cannot escape causes an explosion.

How does a nuclear bomb work?

1 Kg of pure uranium-235 produced 2.2 × 107 KWH energy within 10−6 sec The heat formed by this fission process cannot escape. The atomic bomb’s work through nuclear fission produces a tremendous explosion. It resulted in a violent blast with an intense temperature of 107 °K with dangerous radioactive radiation.

The first effective bomb, called “lean boy” was released on Hiroshima in Japan at 8:11 A M on August 5, 1945, from an altitude of 31600 feet. The effects and pollution of the bomb are known to everyone human being now.

How does nuclear fission produce energy?

In the fission process, longer chain propagation produces greater energy. In such cases, the energy is very large and cannot be used for any peaceful purpose for mankind.

The useful application of fission energy goes through the control of the propagation of the chain. Scientists have succeeded to control nuclear chain reactions. Therefore, fission is useful in creating energy or electricity for mankind.

How does fission create electricity?

Burning carbon materials or fossil fuels such as wood, coal, natural gas, and renewable energy such as sun, wind, and water are the main sources of energy that we used in our daily life.

Fusion and fission reactions are produced a large amount of energy but the application of such energies is different.