What are radioactive isotopes? 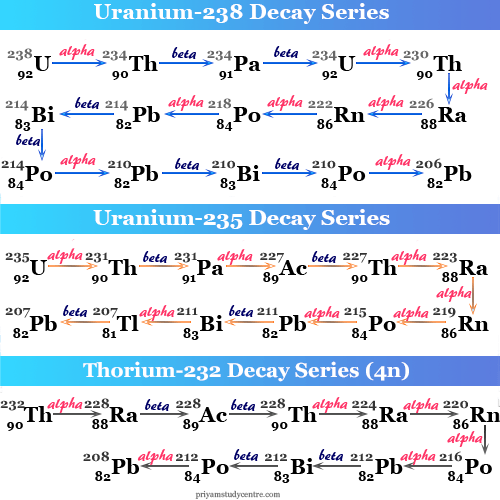 Isotopes possess identical chemical properties due to their identical electronic configuration. It is formed due to the spontaneous radioactive decay of alpha, beta, gamma particles in form of energy.

In 1913 Soddy define the law of radioactivity to describe the position of the radioactive isotopes or radioisotopes in the periodic table known as the group displacement law. This law states that when an alpha particle is emitted in a radioactive decay step, the product is displaced two places to the left in the periodic table but the radiation of beta particles results in a displacement of the product to one place to the right.

In the year when Soddy proposes the group displacement law, the knowledge of the atomic structure or electronic orbital configuration was still incomplete. He proposes this law through extensive chemical studies on the disintegration products of different radioisotopes. Soddy coined the term isotopes for such elements as they occupy the same position in the periodic table.

Uranium is the first discovered radioactive f-block elements with an atomic number of 92. Since uranium-238 successive decay to form the most stable isotope of lead-208. It is an example of radioactive decay series. 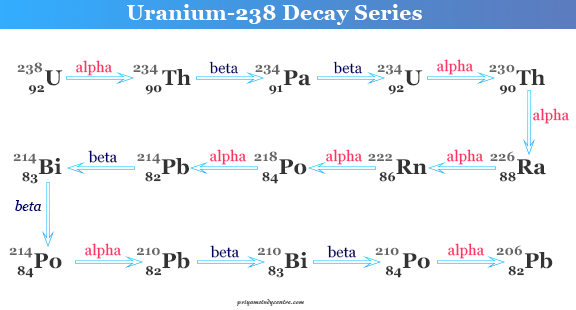 Uses of radioactive isotopes in medicine

Radiation therapy of radioactive isotopes uses mainly as a weapon to kill the affected tissue in the human body in our daily life. It is used mainly in radiotherapy for cancer treatment or used as electromagnetic spectrum radiation in medicine.

A radioactive isotope of iodine-131 uses in external radiation therapy for the treatment and diagnosis of thyroid gland disorders in the human body.

After drinking a solution of sodium iodide containing iodine-131, the radioactive iodine moves preferentially to the thyroid gland. The beta emission from iodine-131 destroys the malignant cells without affecting the rest of the body.

Sodium-24 isotope is used in the abnormality of blood circulation in the human body. Therefore, the doctor injected the vein of the patient with sodium salt containing sodium-24 isotope.

Phosphorus-32 isotope is used in leukemia therapy or the treatment of blood cancer. Leukemia is the overproduction of white blood cells in the human body.

Radioactive isotopes have played a key role in the evaluation of reaction mechanisms and chemical kinetics in chemistry.

If the alcohol oxygen is labeled with O-18, then two cases arise, the ester will carry O-18 or the ester does not carry O-18 but water carries the O-18 isotope. In reality, both possible mechanisms have been observed.

Isotopic labeling of sulfur-35 has been used to establish the non-equivalency of the two sulfur atoms in the thiosulfate ion.

All the iodine in HgI4– ion is equivalent proved by isotopic labeling of iodine.

Uses of radioisotopes in agriculture

Radioactive isotopes in agriculture are used to determine essential constituents intake from fertilizer and the same constituents from the soil.

After a certain period of growth, the plants are burnt. The quantity of phosphorus and phosphorus-32 in the ash can be determined by chemical analysis. The fact tells us that the amount of labeled radioactive isotope consumed by the plant.