What is radioactive decay?

Rutherford and soddy 1902 proposed the law of radioactive decay. According to them, atom of radioactive elements undergo spontaneous disintegration to form a new atom of elements.

Soddy also coined the term radioactive isotopes which occupy the same place in the periodic table. In chemistry, the half-life is the period of time when half of the radioactive substances undergo disintegration.

Radioactive decay is one important natural phenomenon obeying the first-order chemical kinetics. It is used mainly in radiocarbon dating and the determination of the age of matter or materials. The rate of radioactive decay formula depends only on the single power of the radioactivity.

Therefore, dN/dt = − kN, where N = number of the atoms of the disintegrating radioactive element, dt = time over which the decay is measured, and k = radioactive decay constant. 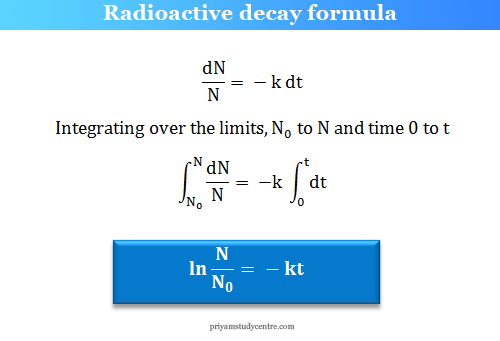 What is half-life period? 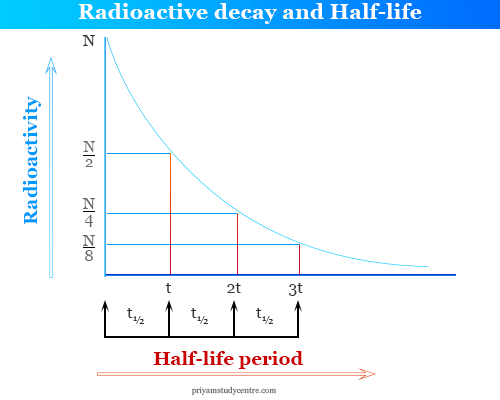 How to calculate half-life?

This equation provides the relation between half-life and radioactive decay constants. Hence the half-life is independent of the amount of the radio element present at a given time. The half-life of polonium-213 isotope = 4.2 × 10−6 sec and bismuth-209 isotope = 3 × 107 years.

If the radioactivity of an element is 100% and the half-life period of this element is 4 hours.

The mean life period of an atom of the radioactive element tells us the average span of time after which the atom will disintegrate. It is the length of time a radioelement can live before it disintegrates that may have values from zero to infinity. This explains the gradual radioactive decay of the radioisotopes instead of the decay of all the atoms at the same time.

The total number of radioactive atoms (N0) is composed of many small numbers of atoms like dN1, dN2, dN3, etc, each with its own life span t1, t2, t3, etc.

Carbon-14 dating or carbon dating is a method for determining the age of organic compounds based on the accurate determination of the ratio of radioactive decay of carbon isotopes present in our environment.

The C-14 dating method was developed by Willard Libby, at the University of Chicago in 1940. He received a Nobel prize in chemistry or chemical science for his work in 1960. Carbon-14 is produced in the atmosphere by the interaction of neutron particles with ordinary nitrogen or cosmic reaction.
7N14 + +1e0 → 6C14 +1H1

Carbon reacts with atmospheric oxygen to form carbon dioxide and carbon dioxide is taken by plants in photosynthesis and by animals by eating plants. But when the animal or plant dies, it stops exchanging carbon with its environment. Since there is no fresh intake of stratospheric carbon dioxide and the dead matter is out of chemical equilibrium with the atmosphere.

The carbon-14 continues to decay so that thereafter a number of years only a fraction of carbon-14 is left on the dead matter. The ratio of carbon-14 and carbon-12 drops from the steady-state ratio in the living matter.

By measuring this ratio and comparing radioactive decay with living plants, we can estimate when the plant died or the age of dead substances.

How to calculate Avogadro’s number?

Knowledge of the radioactive decay model of certain radioactive isotopes helps to determine the age of various rock deposits in nuclear chemistry. Let us consider uranium-containing rock formed many years ago. The radioactive uranium-235 started to decay and end with lead-207 to form the decay series or chain.

The half-life of the intermediate members is small compared to that of uranium-235 (4.5 × 109 years). Therefore, uranium that started to decay many many years ago must have been completely converted to the stable lead-207 during this extra-long period.

Hence remaining uranium-235 and the lead-207 were present at zero time when the rock solidified. Therefore, both N0 and N are known. In radioactivity, the decay constant (k) is calculated from the knowledge of the half-life of uranium-235. Thus the age of the rock can be calculated.

Problem: A piece of wood was found to have a carbon-14 and carbon-12 ratio of 0.7 times that in the living plant. Calculate the approximate period when the plant died (t₁/₂ = 5760 years).