Uranium is a silvery-white radioactive chemical element or metal present in the f-block of the periodic table with the symbol U and atomic number 92. It was discovered in 1789 by Martin Heinrich Klaproth in a specimen of pitchblende. 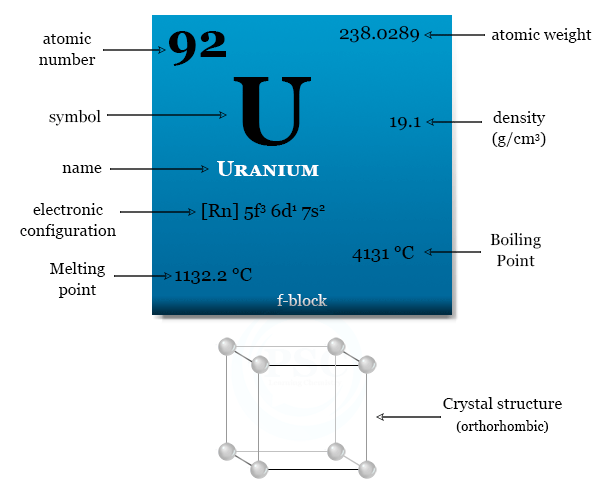 The electronic configuration of uranium is [Rn]5f36d17s2. Therefore, it has six electrons outside the stable radon configuration. Uranium reacts with almost all non-metal elements (except noble gases) and their compounds.

Naturally occurring uranium contains only one percent fissionable U-235 and 99 percent U-238. It can decays slowly by emitting an alpha particle.

Where uranium is found?

Naturally occurring uranium contains mainly 238U and 235U. Most of the uranium used in nuclear reactors is found in six countries such as Kazakhstan, Canada, Australia, Namibia, Niger, and Russia.

The most important source of uranium is pitchblende (U3O8). Pitchblende is found mostly in the Great Bear Lake in Canada. A significant amount of uranium ores like Carnotite is found in Siberia in Russia and the United States.

How uranium is mined?

Uranium occurs naturally in low concentrations in soil, rock, and water. It is commercially extracted from uranium-containing minerals such as uraninite. Uranium mines in the world go through open pit, underground, in-situ leaching, and borehole mining.

Other important uranium mining countries in the world may include,

The production or extraction of uranium from pitchblende contains the following main steps, 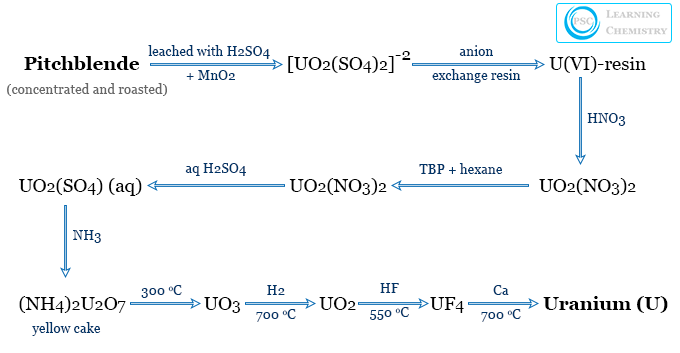 Uranium is a silvery-white malleable, ductile, slightly paramagnetic, radioactive metal that has strongly electropositive properties. Uranium metal is denser than lead but slightly less dense than tungsten and gold.

Uranium in the periodic table 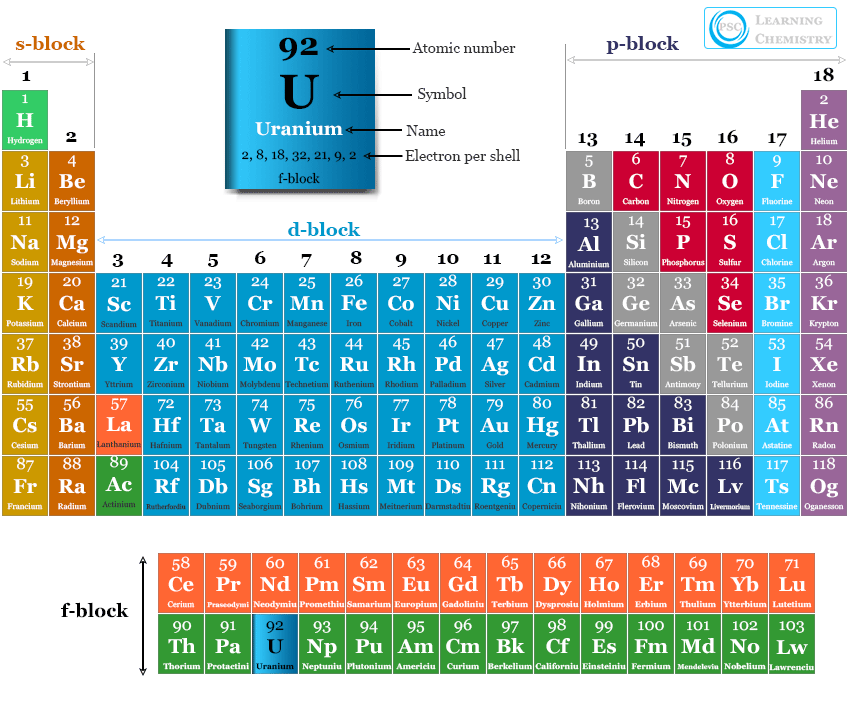 The uranium atom has 92 electrons and 92 protons with electronic configuration [Rn] 5f3 6d1 7s2. It has an incomplete f-orbital. Therefore, uranium is placed in period 7 in the periodic table within the f-block elements or actinides.

It reacts with almost all non-metal elements and their compounds. The reactivity of metal increases with the increasing temperature.

It can be dissolved by hydrochloric acid and nitric acid but react slowly with non-oxidizing acid. The finely divided metal reacts with cold water. In the air, it becomes coated with a dark layer of UO2.

All these four oxides dissolved in nitric acid to form a solution containing uranyl ion. Fusion of uranium oxides with alkali and alkaline earth metal carbonates produces uranates and diuranates.

It is used for painting porcelain and making fluorescent glass.

It is soluble in ammonium carbonate to form a carbonate complex. On heating below 580 °C ammonium diuranate decomposes to UO3. U3O8 is formed above 580 °C.

Uranyl nitrate has the chemical formula UO2(NO3)2. It is obtained when UO3 or any other oxide of uranium metal dissolves in nitric acid.

Uranyl nitrate is freely soluble in water, alcohol, and ether. the crystalline forms which contain three and two molecules of water may be obtained from the concentrated and fuming nitric acid solution respectively.

Uranyl sulfate (chemical formula UO2SO4, 3H2O) may be prepared by evaporating uranyl nitrate with concentrated sulfuric acid followed by leaching with water. Yellowish green crystals may be isolated from the concentrated solution.

Anhydrous uranyl chloride (UO2Cl2) may be prepared by the action of chlorine on UO2 at 500 °C or the action of oxygen on UCl4 at 300 °C. A solution of UO3 in HCl yields yellow-green crystals of UO2Cl2, 3H2O.

Uranyl carbonate (UO2CO3) is present in the mineral rutherfordine. It may be precipitated from solutions containing the uranyl ion with ammonium or sodium carbonate.

Uranyl acetate has the chemical formula UO2(CH3COO)2, 2H2O. It may be prepared by dissolving UO3 in acetic acid and crystallizing.

Naturally occurring uranium metal contains the three most common isotopes 234U, 235U, and 238U. All these three isotopes are radioactive. They emit alpha particles and they have a small probability of undergoing spontaneous fission reactions. It has also four trace isotopes U-239, U-237, U-236, and U-233.

What is uranium used for?

It is the most widely used fuel in nuclear power plants. It is considered a nonrenewable energy source found in rocks. Thermonuclear reactors are based on U-235. Uranium is a more common metal than silver but U-235 is relatively rare. Therefore, ordinary uranium which contains mostly U-238 has to be enriched in U-235 for use as nuclear fuel.

Most of the uranium mined from Kazakhstan, the United States, Canada, Australia, and Russia has to be enriched in U-235 for nuclear fission reaction. It is achieved by a multistage diffusion process and a gas centrifuge process.

Another alternative promising process depends on the appreciable difference in ionization energies of U-235 and U-238. A mixture containing both kinds of atoms in a vapor state is subjected to a laser beam when only the U-235 atoms are ionized. The ions are subsequently collected on a negative electrode. It is called laser isotope separation.

Nearly fifty percent of the total reactor requirement of uranium comes from reprocessing of nuclear fuels. Many of the fission products in a nuclear power rector strongly absorbed neutrons. They have to clear from time to time for the smooth running of the nuclear reactor. These fission products are separated from the unchanged uranium for further use in energy generation.

What is nuclear fission? Nuclear fission is a nuclear reaction where a heavy nucleus of an atom is split spontaneously to produce two or more smaller...