What is nuclear power and energy?

Nuclear power is the source of energy formed by nuclear reactions for the generation of electricity. The use of nuclear power increases due to the increasing demand for electrical energy in the world. 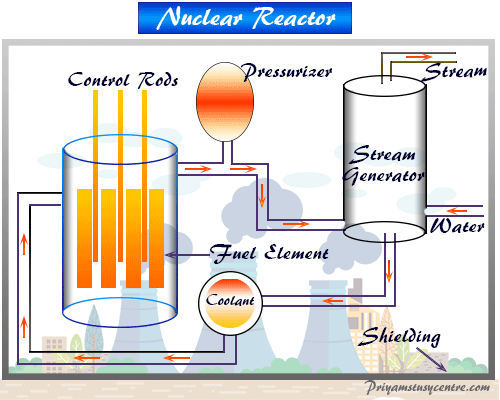 Nuclear fusion reactions are going through the evolution of a large amount of energy due to the conversion of mass into energy. The future hope of mankind lies in the ability of scientists and engineers to produce reactors capable of giving fissionable isotopes from the abundant periodic table elements like lead thorium and mercury.

Nuclear fusion energy produces in sun and stars by fuse hydrogen atoms to produce helium. The loss of mass converted a huge amount of energy. It has been calculated that during energy output, the sun losses four million tonnes of mass per second. Even with such a fantastic rate of mass loss, our sun will continue to bless us with good earth for over thirty billion years.

How does a nuclear reactor work?

Scientists have succeeded in controlling nuclear fission or chain reaction in generating electricity for mankind. Today variety of nuclear reactors operates in different parts of the world. The nuclear power generator has the following basic components,

Natural uranium enriches with isotope uranium-235 and plutonium-239 is used in the form of plates alloyed with aluminum for fuel. These plates are separated from each other by neutron-moderating reagents like graphite.

Cadmium or boron can be used as a fuel rod in nuclear reactors. These metals use because they are good absorbers of neutrons. Therefore, the rate of nuclear fission reactions is controlled by pushing or pulling this rod in a reactor.

When the chain reactions are not controlled by fuel rods we use moderators to reduce the speed of the reactions. Generally, graphite, water, and deuterium oxides are good moderators in nuclear power plants.

Coolant is the substance that conducts heat away to a heat exchanger. The energy produced in rectors is given as specific heat. Usually, deuterium oxide, water, or even a molten mixture of sodium and potassium uses as the coolant in the world.

The most common use of coolant in the USA is water. In electrical energy generation, this heat utilizes to generate steam which drives to turbines for producing electricity.

For environmental conservation, we use shielding substances to protect life from harmful electromagnetic radiation. Therefore, the high radiation produced in the interior of the reactors protects by the use of water, concrete, or both. But for better protection lead shielding is used in the nuclear power plant to protect gamma rays.

Why nuclear energy is good?

With increasing the demand for electricity and decreasing the source of fossil fuel we mostly use atomic and renewable energy (solar, geothermal, and wind energy) as an alternative source for the electric power generation process.

Fossil fuel is responsible for the greenhouse effect or different types of environmental pollution. Today almost about 440 reactors operating in the world in 30 countries.

The nuclear power plant for electrical energy generation sources has first established in India by Tarapur near Bombay in 1969. Next on Ranapratpnagar in Rajasthan in 1973. The atomic power plant was also set up at Kalapakkam in Tamil Nadu in 1983 and Narora in Uttar Pradesh in 1990.

Nuclear power plants play a key role in electricity generation in the United States. If the reactions in the atomic plant go beyond control tragedies like Chornobyl (Russia) and Fukushima (Japan) will befall the world.