Nickel is a chemical element, silvery, malleable, ductile, ferromagnetic transition metal of group 10 of the periodic table with atomic number 28 and symbol Ni. It is used in making alloys with iron and other nonferrous metals like silver and chromium. 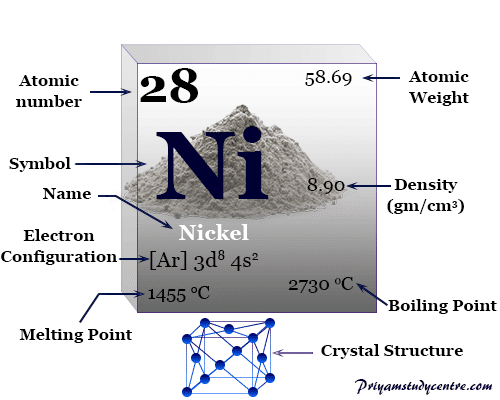 The compact metal is quite resistant to air or water but finely divided nickel is very reactive and pyrophoric. It is slowly attacked by dilute hydrochloric acid and sulfuric acid but dissolves readily in dilute nitric acid and aqua regia.

The name of the metal nickel is derived from the German word devil spirit.

In the 17th century, a mineral had the appearance of cuprite but could not be melted to obtain copper. Metallurgists decided that the ore was dominated by the evil spirit of the mountain copper devil or Kupfer-nickel.

The confusion regarding the mineral persists until 1751. In 1751, Axel Fredrik Cronstedt extracts copper from the copper devil or Kupfer-nickel mineral in Sweden.

Sometime after, scientists believed that Ni was a mixture of cobalt, iron, arsenic, and copper. The doubts were finally resolved by scientist T Bergmann in 1775.

The face-centered cubic crystal lattice nickel is a hard silvery metal. It is very malleable and ductile and easily rolled down or polished.

The ferromagnetic properties and Courie point of cobalt (375 °C) are less than that of cobalt and iron. The compact metal is quite resistant to air and water but strong heating in the air produces little amount of oxide.

Some common physical and atomic properties of nickel are given below the table,

Nickel in the periodic table

The transition metal nickel is placed in period-4 and group-10 of the periodic table with other group members palladium and platinum. 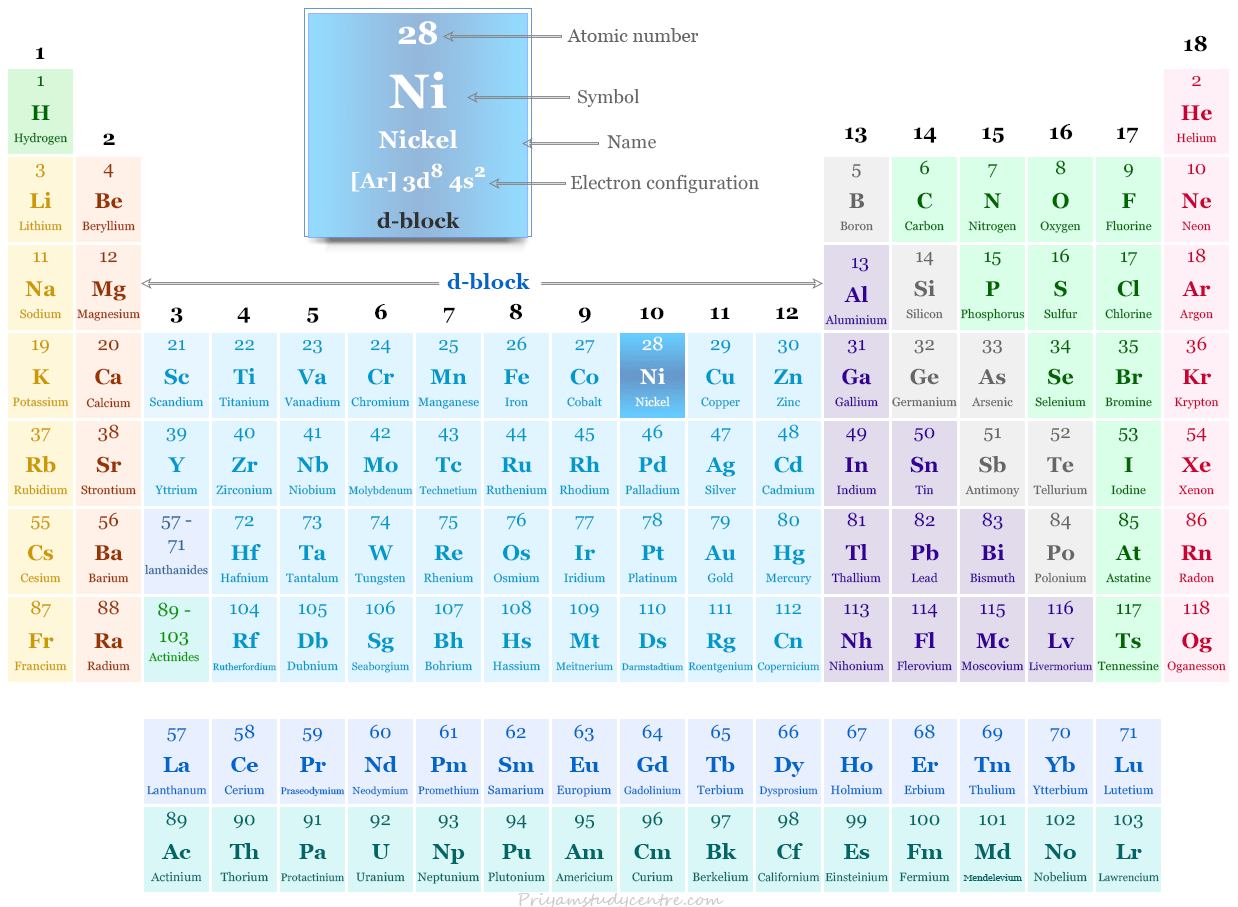 Where is nickel found?

It is the twenty-second most abundant element found in the earth’s crust and the seventh most abundant metal among the transition elements. It is found most often in combination with sulfur, iron, and arsenic in the mineral-like nickeline.

Indonesia and Australia have the biggest reserves of metal. Garnierite is found in New Caledonia, Cuba, Brazil, and Queensland. The most important single deposit of nickel is found in countries like Sudbury, Canada, Russia, and South Africa.

Nickel is mainly produced from sulfide ore which contains about 3 percent of Ni, 1.5 percent of copper, and precious metals like gold, silver, and platinum. The main steps for extraction of metal,

In the electrolytic refining process, the Ni-Cu mate is roasted in a multiple hearth roaster to form their respective oxides. Most of the copper oxide is leached out with hot dilute sulfuric acid.

The residue is further reduced with coke which contains 65 percent of Ni, 30 percent of copper, and 3 to 8 percent of sulfur and iron residue.

Electrolysis is carried out with NiSO4 solution with Ni electrode or cathodes on which the pure metal is deposited.

Some common compounds of nickel are discussed below,

Green solid NiO is the common oxide of nickel. NiO is formed by thermal decomposition of the hydroxide, carbonate, oxalate, or nitrate.

It has a cubic crystalline solid structure that is readily soluble in water.

The green color nickel hydroxide has the chemical formula Ni(OH)2. The green gel precipitate of Ni(OH)2 is formed by the addition of alkali metal hydroxide solution to aqueous Ni (II).

It is the only metal from the first transition elements that form halides in a +2 oxidation state. All four anhydrous halides like NiX2 are known.

The metal is used for making electrical cells like alkaline Fe-Ni and Cd-Ni cells and gas diffusion electrodes for alkaline fuel cells.

What is nickel alloy?

The metal is used mainly in the form of alloys like Monel metal, nickel silver, nichrome, alnico with iron, and other nonferrous metals.

68 percent of nickel from global production uses for making stainless steel. The metal is used in many industrial and consumer products like stainless steel, magnets, rechargeable batteries, electrical plating, etc.

The alloy, alnico is used for making permanent magnets like horseshoe magnets.

The chemical catalyst of nickel is used for the hydrogenation of oils and hydrocarbon in organic chemistry.

The common chemical catalyst for this purpose is Raney Nickel. It is a highly active form of the metal prepared by dissolving aluminum from the alloy NiAl3 with alkali.

Role of nickel in biological system

The natural biological application of nickel was established only in 1975 with the discovery of the metal in the enzyme jack bean urease.

The enzyme is present in a number of plants, eubacteria, archaebacteria, and fungi. The enzyme contains an uncommon oxidation state like +2 with a redox reaction inactive unit containing octahedral Ni which acts as a Lewis acid.

The redox-active nickel centers are present in other enzymes like Hydrogenase, CO dehydrogenase, and methyl-S-coenzyme M reductase found mainly in bacteria.