Copper is a chemical element or reddish-brown transition metal of Group 11 or IB of the periodic table with the symbol Cu and atomic number 29. It is a soft, tough, and lustrous metal with high thermal and electrical conductance. Copper helps in the formation of hemoglobin (an oxygen carrier) in the animal body. 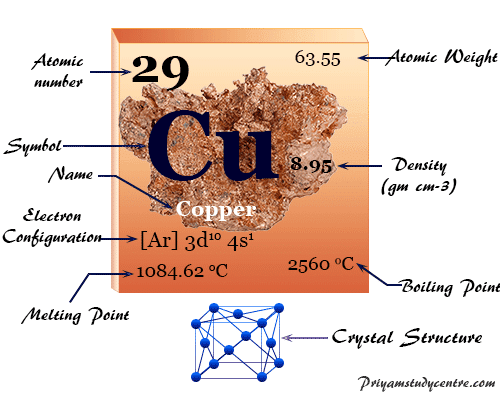 The metal forms a face-centered cubic crystal lattice. It is found in our environment as a free metallic state or ores which can be easily extracted.

Bronze, the alloy of copper and tin is used in history by mankind since the Bronze age. Copper is found in hemocyanin in the blood of cuttlefish and plants like green peas.

The archaeological discovery of the island, namely Cyprus in the eastern Mediterranean Sea is famous for its mines of copper. The name copper is derived from the Latin name Cuprum via Cyprium.

In chemistry, the physical and chemical properties of coinage or noble metals like Cu, Ag, and Au are very similar.

Copper in the periodic table

The currency metal, copper, silver, and gold are placed in group-11 or group-1B of the periodic table. 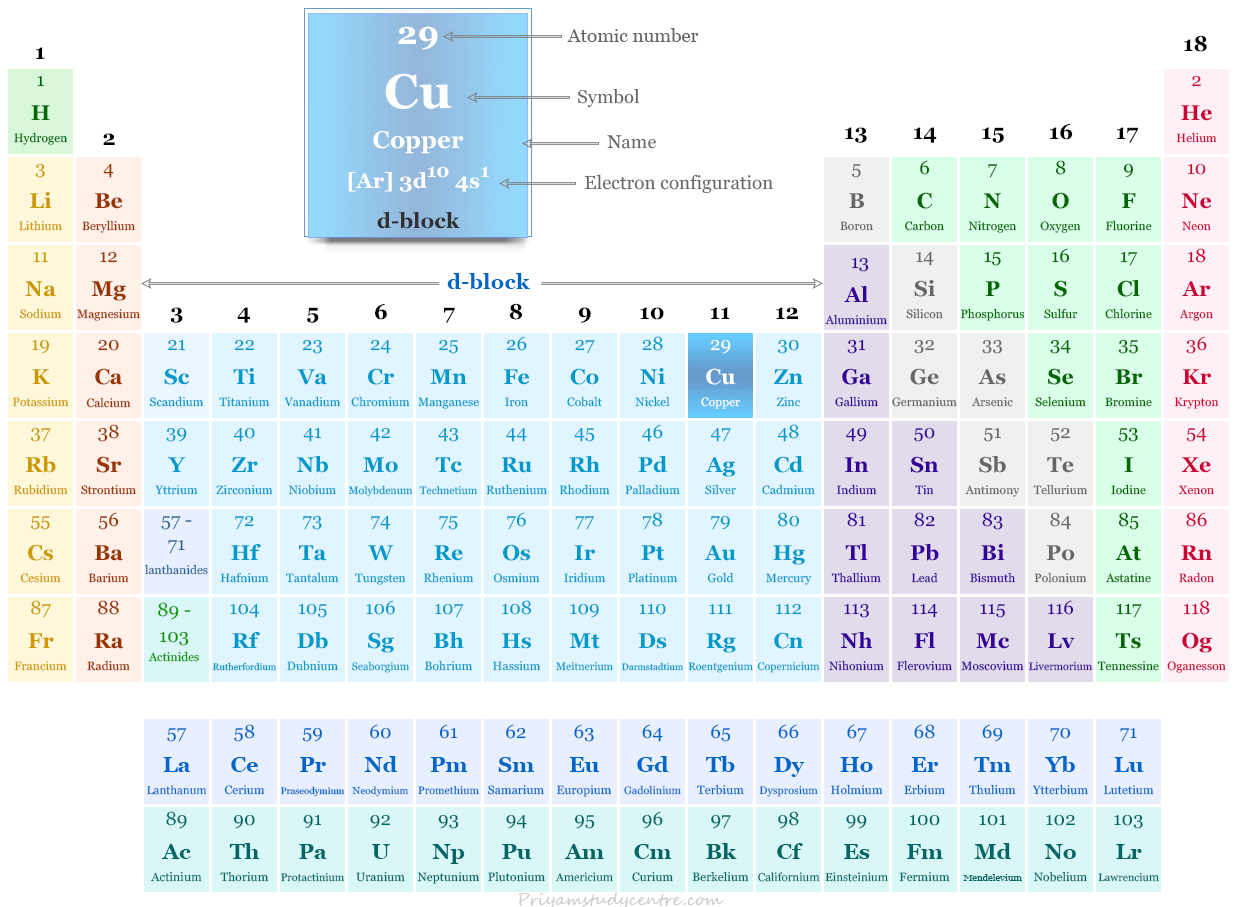 All these metals contain ns1 (n−1)d10 valence shell electronic configuration with filled d subshell. Due to the presence of incompletely filled d-subshell in +2 or +3 oxidation number or state, they are called transition metals.

In the early Mendeleev periodic table coinage metal like Cu, Ag, and Au are placed with alkali metals. Both the alkali metal and the currency or coinage metal have one electron in the outermost s-orbital and +1 is the common oxidation number or state.

The group 11 metals have high first ionization energy and smaller ionic radii. The involvement of d-electrons in metallic bonding impacts a higher melting point of copper.

The Cu (II) ion is more stable than Cu (I) ion in water solution. It is due to the small size and hence the enormously high hydration energy of Cu (II) over that of Cu (I) which offsets the second ionization energy of copper.

Where is copper found?

Copper is present in the earth’s crust to the extent of 68 ppm which is slightly less than that of nickel.

The native copper (minerals of basaltic leaves) and the reduced form of metal compounds like sulfide, carbonates, arsenide, and chloride are found in various locations of the world.

It is largely found in North or South America, Chile (the world’s leading producer), Congo, and Russian counties. In India, two main deposits of Cu ore are present in Bihar (Singhbhum) and Rajasthan (Alwar, Ajmer, and Khetri).

The major ores of the metal  are given below the table,

It is extracted mainly from the sulfide ore by the self-reduction process. The low grade ( 0.5 percent Cu) covert to high grade (15 to 20 percent of Cu) for the high production of the metal. Froth- flotation process is used for this purpose.

The main steps for extraction of copper are,

The ore is roasting and smelting (about 1400 °C) with the addition of silica in a reverberatory furnace. The FeS is preferentially oxidized prior to Cu2S due to the more basic properties of iron.

The iron oxide forms a slug with silica. The molten mass is separated to form the top layer. The lower layer contains copper matte (Cu2S and FeS).

Refining of copper by electrolysis

The crude metal is refined by electrolysis in a bath of acidified sulfate solution using crude Cu as an anode and pure Cu as a cathode. The impurities from the anode are used for the recovery of gold, silver, and platinum.

Cu (II) state is the main oxidation state of copper metal with d9 configuration. Cu (I) has the closed-shell 3d10 configuration and highly stabilizes by exchange energy.

The solid compounds in the +1 state are thermodynamically stable at moderate temperature. Therefore, Cu2O is formed at high temperatures from CuO and CuBr2 decomposes on heating to form CuBr.

A large number of chemical compounds are formed in the +1 and +2 states of copper metal.

Cu (III) is isoelectronic with nickel (II) but only a few compounds are known in this state.

The blue precipitate of copper (II) hydroxide is obtained by adding alkali to the aqueous Cu (II) solution. The precipitate darkens on standing due to dehydration of hydroxide to oxide. It is soluble in alkali to form [Cu(OH)4]−2.

In ammonia solution, it forms deep blue [Cu(NH3)4(H2O)2]+2. The deep blue solution is called Schweizer’s reagent. It is used for dissolving cellulose and making cuprammonium rayon.

Only white fluoride,  yellow chloride, and black bromide are known in a +2 oxidation state. Due to reduction properties, iodine reduces CuI2 to form Cu2I2.

The hydrated halides are obtained by dissolving CuCO3 or Cu(OH)2 in hydrogen halides. CuF is not well characterized.

The other halides of Cu (I) are colourless solids insoluble in water. Cuprous chloride is prepared by reduction of Cu (II) with copper metal or sulfur dioxide in hydrochloric acid.

Copper sulfate (CuSO4, 5H2O) is prepared by dissolving scarp elements in dilute sulfuric acid in presence of air and crystallizing.

The nitrate is obtained as a deep blue deliquescent crystalline solid, Cu(NO3)3, 3H2O by the action of nitric acid in Cu (II) solution.

Due to the larger size and higher value of the sum of the first, second, and third ionization energy, Cu (III) forms a few chemical compounds.

There are no simple examples of halides but pale green K3CuF6 may be obtained by the action of fluorine in a mixture of potassium chloride and CuCl2 at 250 °C.

Solid cuprate (III) compound like KCuO2 is formed by heating the mixture of CuO with alkali metal superoxide in presence of an oxygen molecule.

Brass is an alloy of copper. It is obtained by alloying copper with zinc, and other metals like aluminum, nickel, and lead.

Generally, it contains 57 to 97 percent of Cu, and the remaining is Zn or other metals which modify the mechanical strength and chemical properties.

Delta metal is hard as steel and resistant to seawater. It is used for making ship propellers and bearings.

Bronze is the alloy of copper, tin, and other metals like aluminum, manganese, and zinc, etc. Commonly bronze contains 4 to 25 percent of tin and other elements.

It is widely used for making statues, and currency coins. Nowadays, these alloys are gradually replaced by steel and other cheaper and lighter aluminum-based alloys.

Cupronickel (10 to 30 percent nickel and the remaining being copper) has high tensile strength and is resistant to chemical corrosion, rust, and acid.