Iron is a chemical element, silvery-white, lustrous, malleable, and ductile metal of Group 8 (VIIIB) of the periodic table with the symbol Fe and atomic number 26. It is the most useable and cheapest metal which is used by a human civilization much later than copper, silver, and gold.

In learning chemistry, the chemical element iron is included in the transition metals family due to the presence of incompletely filled d-orbitals in their atomic or ionic state.

It is the most magnetic substance among all elements and a moderately chemically active metal in the earth’s environment.

The second most abundant metal, iron has the valence electronic configuration [Ar] 3d6 4s2, and common oxidation number +2 and +3.

Iron in the periodic table

Iron is placed in group 8 and period 4 in the periodic table. It is a transition metal that lies between manganese and cobalt. 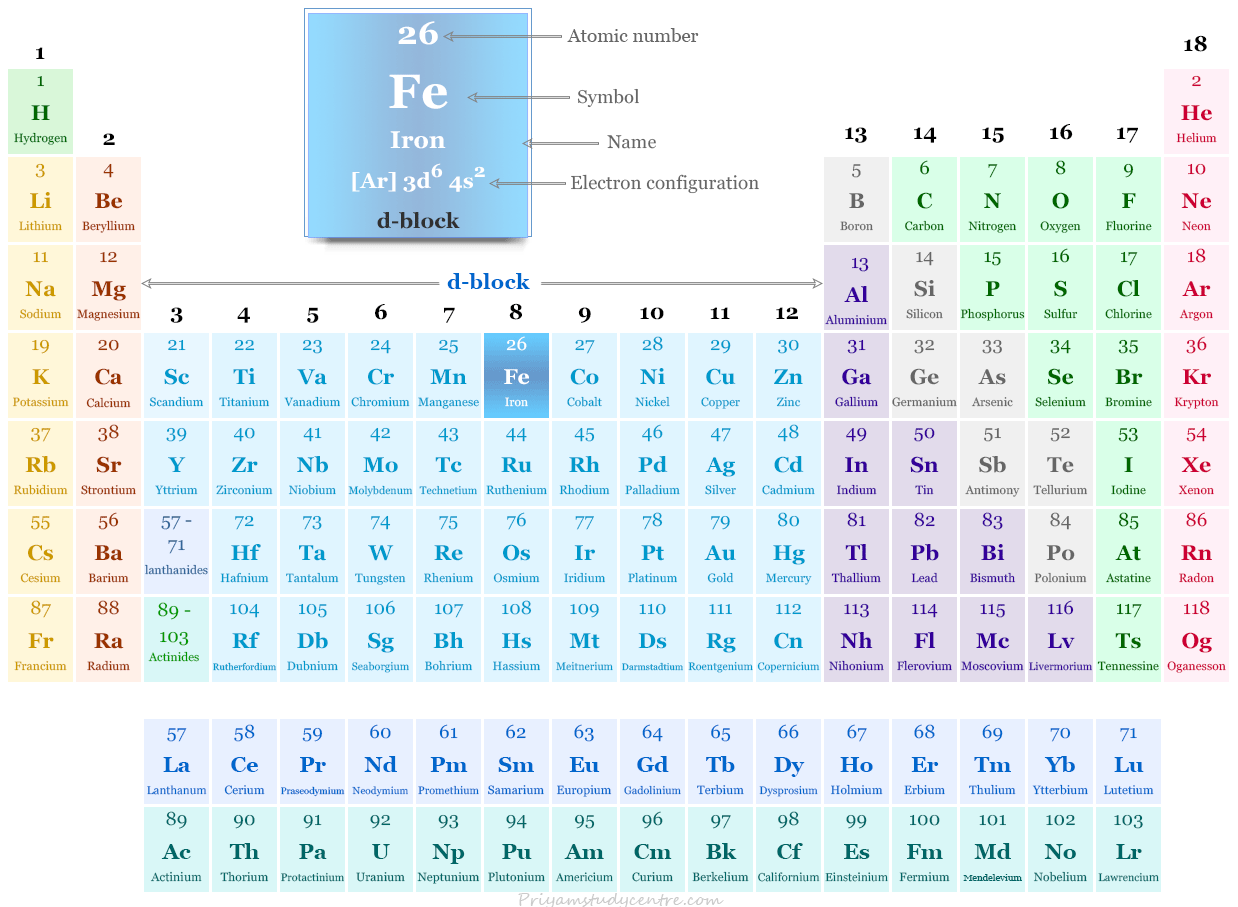 It is joined in the race of human civilization before copper, silver, and gold. It was first used by our forefathers around 4000BC. The knowledge of extracting iron from its different types of ore developed in different countries over a long interval of time.

In Egypt and Mesopotamia, the process was discovered about 2000BC. Early methods of heating ores with coal on windy sites yielded spongy metal shaped by prolonged hammering. The technique for making good quality metal was developed by using a furnace.

In modern times, smelting furnaces have become well developed. Improvement of mechanical strength by making steel from iron ores was coming in the nineteenth century.

Where is iron found?

Iron is the second most abundant metal after aluminum. It is the fourth most abundant chemical element after oxygen, silicon, and aluminum in the earth’s crust occurring to an extent of more than 5 percent or 50,000 ppm.

In the earth’s crust, the free metal is rare, terrestrial iron in basaltic rocks found in Greenland. Carbonaceous sediments are found in the United States (Missouri).

About 0.5 percent of lunar soil consists of metallic iron, which means a vast quantity of Fe is present on the moon’s surface.

Ores of iron and their formula

The most common oxide ores and minerals that occur in the earth’s crust may include,

Pyrites cannot be economical to produce Fe and hence pyrites are not considered an ore of Fe.

The ores are found in different countries like China, Brazil, Australia, United States, and India.

Iron is extracted through carbon reduction in a blast furnace.

What is pig iron?

The molten slug and crude metal collect at the base of the blast furnace where they form separate layers and the slug floats on molten metal, preventing it from oxidation. These are drowned through separate holes and allowed to solidify in the sand mold to form pig or cast iron which contain impurities like carbon, silicon, phosphorus, sulfur, and manganese.

When most of the impurities present in pig-Fe are removed, the pure commercial form of metal is formed, known as wrought iron.

In chemistry, iron has characteristic properties of transition metals with various oxidation states and various types of coordination and organometallic chemical compounds in different types of chemical bonding.

In Fe (II), it forms simple compounds like oxides, halides (except iodine), and other salts, together with a large number of complex compounds. FeF3, FeCl3, and FeBr3 are the halides of Fe, formed by the direct reaction of metals with respective halogens like fluorine, chlorine, and bromine.

Fe (II) is reducing in nature to form a large number of simple and complex compounds that are quite stable in +2 state. The halides, nitrate, perchlorate, and sulfate are soluble in water but the hydroxide, carbonate, phosphate, and oxalate are sparingly soluble.

What is iron used for?

Function of iron in the body

It is a non-toxic essential element for all forms of life (plants and animals). A lot of iron ion is present in the hemoglobin of blood which carries oxygen from the lungs to the cell for the respiration of the body.

The deficiency of iron in the human body causes anemia which is the most common neutralization disorder all over the world, in both developed and underdeveloped countries.

Chronic blood loss, repeated pregnancy, and hookworm infarction may cause anemia in the human body. Anemia is characterized by a lower concentration of iron in hemoglobin of blood (<12mg/liter), which causes retired growth, loss of appetite, sluggish metabolic activities, and dull or inactive attitude.

Vanadium Element Vanadium is a chemical element or shining silvery-white, low-density, transition metal of Group 5 (VIB) of the periodic table with symbol V and atomic...