What is a buffer in chemistry? 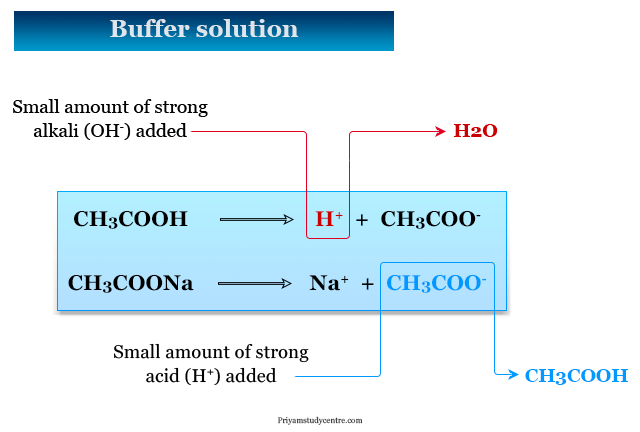 In the laboratory, buffer solutions are extensively uses for the analysis of different types of precipitation which is carried out at specific pH ranges. In the industrial chemical process, various operations are pH controlled. Therefore, we used buffer action to control such types of operations.

Some of the common buffers which we used in the lab with their pH ranges are given below the table,

Buffer solutions consist of either a weak acid or weak base and its salts. Therefore, buffers are broadly divided into two types,

Acid buffers are the mixture of a weak acid and its salt. A mixture of acetic acid and sodium acetate in a certain proportion is an example of an acid buffer solution.

If a few drops of strong base sodium hydroxide are added to this acid buffer, the dissociated OH− ions will be consumed by weak acetic acid. Therefore, the pH of the buffer system remains unchanged.

Alkali buffers are the mixture of a weak base and its salt. A mixture of ammonium hydroxide and ammonium chloride in a certain proportion is an example of an alkali buffer solution.

The buffer action maintains steady pH by adjusting the equilibrium between a weak acid or a weak base and its conjugate ions.

Let us consider the example of an acid buffer containing acetic acid and sodium acetate.

To calculate the pH of a buffer solution made up of a weak acid and its conjugate salt, we can apply the Henderson equation, pH = pKa + log[salt]/[acid].

If the concentration of the salt and the acid in the above relation is the same, we have pH = pKa. Therefore, to make a buffer solution of a particular pH, we used a weak acid whose pKa is close to the desired pH value.

For example, a buffer of pH around 5, a mixture of acetic acid (pKa = 4.74) and ammonium acetate will be a good choice.

Similarly, for alkali buffering, pH = pKb + log[salt]/[base], where pKb = dissociation constant of the base. The above equation is used to calculate the pH of the alkali buffer solutions.

The efficiency of a buffer action to resist the change in pH on the addition of a small amount of strong acid or base is quantitatively expressed by the term called buffer capacity (β).