What is entropy in thermodynamics?

Entropy in chemistry is the thermodynamics property related to the tendency of the system towards the transformation of the states of matter. It measures the thermal energy of the system per unit temperature that is unavailable for doing useful work. 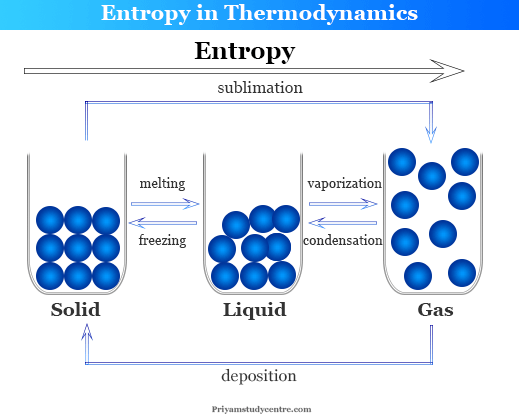 In learning chemistry, entropy is the property that measures the randomness or chaotic condition of the system.

Moreover, all the natural processes in our environment have a tendency to attain equilibrium by increasing the entropy of the system.

The concept of entropy is obtained from the unavailable energy in thermodynamics. The higher the randomness greater will be the entropy for molecules.

Therefore, for a spontaneous process, ΔSnet of the universe (system + surroundings) increases. The system attains equilibrium when the ΔSnet is maximum.

Clasusious defined entropy (S) is a state function and its change is defined,
dS = dqr/T
where dqr = heat change that occurs reversibly
T = temperature at which heat change occurs

How to calculate entropy change in thermodynamics?

Entropy change at a constant temperature

When heat change occurs at a constant temperature. For example, one mole ice changes into liquid water at 0 °C and 1 atmosphere pressure.

Entropy change of the universe

The 1st law of thermodynamics for a reversible process,
dqr = dU + PdV

Combining both the forms, we have the relation,
TdS = dU + PdV

These two equations are called basic thermodynamic equations for states. 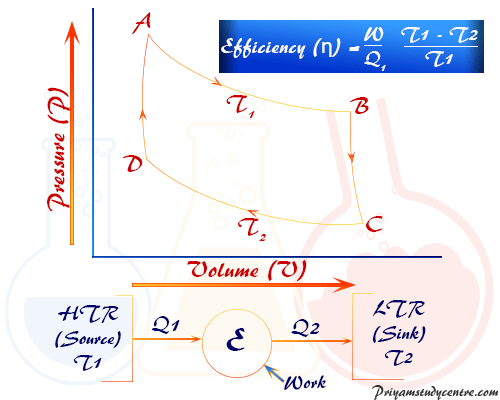 French engineer Sadi Carnot (1824) studied what quantity of work is obtainable from the heat in the Carnot engine. He takes the ideal gas in a cylinder fitted with a frictionless movable piston. The Carnot cycle operates in reversible paths given above the picture.

When a system absorbed a certain amount of heat in the reversible process, a part of the absorbed energy can utilize for producing work. The remaining part goes to increase the randomness or entropy of the system.