What is Law of Mass Action?

Law of Mass Action formula in chemical equilibrium was first developed by two Norweigan chemists, Guldberg and Waage in 1867. They derive a quantitative equation to calculate the equilibrium constant of a reaction in terms of molar concentration or active masses of reactants and products in chemistry. The law of mass action states, at a constant temperature, the rate of a chemical reaction is proportional to the active masses of reacting molecules. Therefore, the definition and expression of active masses in mass action law is an important consideration to help equilibrium chemistry. 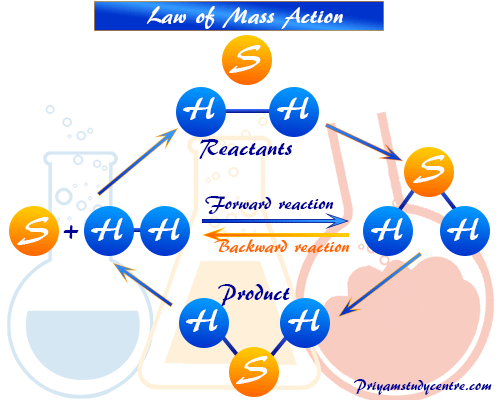 The mass of action law in equilibrium chemistry define before the thermodynamics approach developed. The law of mass action recognized that the chemical equilibrium is a dynamic, not static equilibrium because the reaction rate of the forward reaction is equal to the reaction rate of the backward reaction. How the system behaves if any parameter like temperature, pressure, chemical catalyst of the system at equilibrium changed can be described by different formulas like Le Chatelier Principle and Van’t Hoff equation.

For ordinary systems of dilute solution and gases, the active mass may be molar concentration and partial pressure but for pure crystalline solid or liquid, the active mass is taken as unity according to law mass action.

Partial gas pressure is expressed in the atmosphere for the gas molecules concentration when the pressure of the system is very low. For example, the formation of water reaction and formation of carbon dioxide gas, active mass express in molar concentration, and partial pressure by the law of mass action. But for pure solid and pure liquid, active mass or concentration is assumed to be unity since their mass does not affect the rate of reaction.

Let us state the equilibrium formula and mass of action law to a general chemical reaction, A + B ⇆ C + D. As the reaction proceeds in the forward direction, the concentration of reactants decreases, and the forward reaction rate also decreases. But when the products are getting accumulated in the system, the reverse reaction also starts.

Where CA, CB, and CC, CD are the concentration of forwarding and reverse reactions respectively in molar units. Kf and Kb are the rate constants at a given temperature.

How to calculate equilibrium constant?

When all the reactants and products are the gas phase obey the ideal gas law, the concentration formula is expressed in partial pressure by mass action law. Let the chemical equation for the above expression,

Relation between kp and kc

Let us consider the general equilibrium concentration reaction which expresses the relation between kP and kC gas and liquid phase by mass action law. 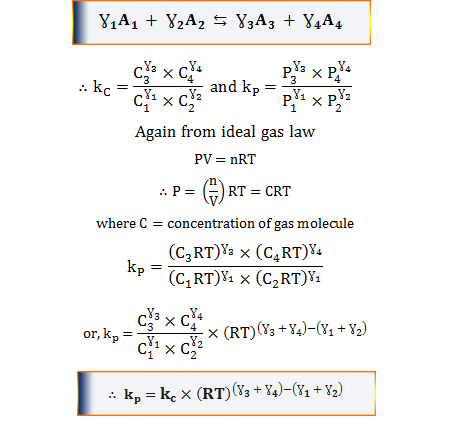 Formation of hydrochloric acid solution from hydrogen and chlorine molecule. In this reaction, the total number of reactant molecules, and of resultant molecules are the same.

For the reactions in which the number of molecules of reactants differs from the resultant molecules of the chemical reaction.

The expression of kP and kC of the above chemical reaction in terms of concentration derives from the mass of action law formula.

Relation between kp and kx