What is chemical equilibrium?

Chemical equilibrium in chemistry is the dynamic state of the system in which the concentration of reactants and products have no further tendency to change with time. At the equilibrium point, the backward and forward reactions go equal rates or velocities without any change in the amounts of substances. 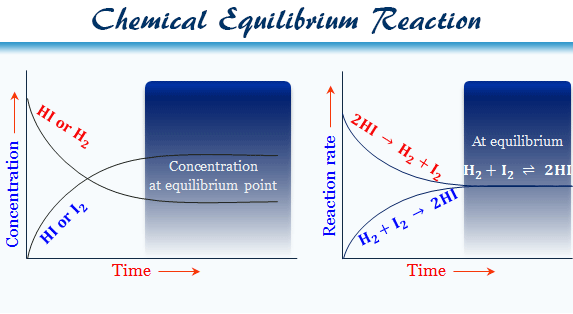 It is found that most chemical reactions do not go to completion even if favorable external conditions like temperature, pressure, chemical catalyst, and pH scale of reaction are maintained.

Norwegian Physicists, Guldberg, and Waage in 1867 developed the dynamic relationship between the equilibrium constant and the amounts of reactants and products present at the equilibrium. The principle is called the Law of mass action.

The chemical equilibrium is not a static one but dynamic in nature. At equilibrium, the forward and backward reaction proceeds at an equal rate. Therefore, the composition of reactants and products remains unchanged with time.

It can be verified by taking an example of the formation of ammonia from nitrogen and hydrogen. Under the experimental condition, we can take the equilibrium composition of NH3, N2, and H2. Only nitrogen in the mixture takes radioactive isotopes of nitrogen.

When does a chemical reaction occur?

A chemical reaction occurs when the reactant or product atoms present in the molecule change their electronic configuration by the formation of chemical bonding. But these leading questions in learning chemistry cannot be defined in a simple sentence.

Primarily two facts determine the feasibility of a chemical reaction under a given set of conditions.

Hydrogen and iodine vapor is kept at a constant temperature in a closed vessel. The reaction proceeds to some extent and then stops, by converting some portion of the hydrogen and iodine to form hydrogen iodide. Because after this dynamic point, the reactant and product attained equilibrium.

In both the experiments, the proportions of hydrogen, iodine, and hydrogen iodide remain fixed. When such a dynamic stage is reached, it is said to have attained equilibrium.

One example of a reversible reaction is taken for the formation of ammonia from nitrogen and hydrogen at 450 °C and 250 atm pressure in presence of a catalyst. Under this condition 13 percent of ammonia formed from reactant molecules.

If the same conditions are maintained, it will be seen that 87 percent of ammonia decomposes to form nitrogen and hydrogen. Therefore, it is an example of a reversible equilibrium reaction.

When water is added to bismuth chloride, a milky solution appears due to the formation of bismuth oxychloride.
BiCl3 + H2O ⇌ BiOCl + 2HCl

But when a hydrochloric acid solution is added to this milky solution, the milkiness of the solution disappears. It is an example of the dynamic reversible nature of the equilibrium.

Reduction of stream in presence of iron or diffusion of syrup by water is an example of irreversible equilibrium where the total heat change goes to increases. Therefore, it reached an equilibrium point where the entropy attains maximum value.

All the natural reactions follow a general trend because they take place in a direction that results in an ultimate decrease or increase in the energy of our environment. These two types of reactions where net energy or heat change increases or decreases are called exothermic or endothermic reactions.

The chemical reaction in which heat escapes from the system to the surroundings is called an exothermic reaction. According to the thermodynamic concept, if heat escape from the system, heat change is negative.

Some examples of exothermic reactions are given below the table,

If the forward process is an endothermic reversible equilibrium reaction then the reverse process happens through exothermic.

For the spontaneous process, two factors control the ultimate energy change of the reactions, enthalpy change (ΔH), and entropy change (ΔS). These two changes are collectively determined by another fundamental property of the system which is known as Gibbs free energy (ΔG).

Problem: Why is equilibrium energy fixed, whether a chemical catalyst is used or not?

Solution: Enthalpy is a state function because ΔH does not change if the initial state and final state are the same.

According to the Le Chatelier principle, the chemical catalyst cannot change the initial and final state of equilibrium reactions. Hence ΔH remains the same whether a catalyst is used or not.

In the homogeneous type of equilibrium, all the reacting components are in one phase or one state of matter like solid, liquid, or gases. These are classified into three types

In the heterogeneous type of equilibrium, all the reacting components are not in one phase. For example, the decomposition of calcium carbonate into calcium oxide and carbon dioxide.

The chemical equilibrium of the thermal reversible systems greatly influences the forward or backward process by absorption of light or photon energy.

The absorption of electromagnetic spectrum radiation or light by the reactant increases the speed of forward reaction but does not influence the reverse reaction. Due to increases in products, the rate of the reverse thermal process increases equally. Ultimately balanced the forward or backward chemical reaction to reach equilibrium.

Once the chemical reactions attain equilibrium, the composition of reactants and products is time-invariant so long the external conditions remain unchanged.

If the external conditions are changed, the equilibrium will also shift and composition is changed. Therefore, according to Ostwald, chemical equilibrium is the dead-end of the reaction.