Chlorine is a nonmetal or chemical element of group-17 or halogen family of the periodic table with the symbol Cl and atomic number 17. Molecular chlorine is a toxic, corrosive, greenish-yellow gas with the molecular formula Cl2. 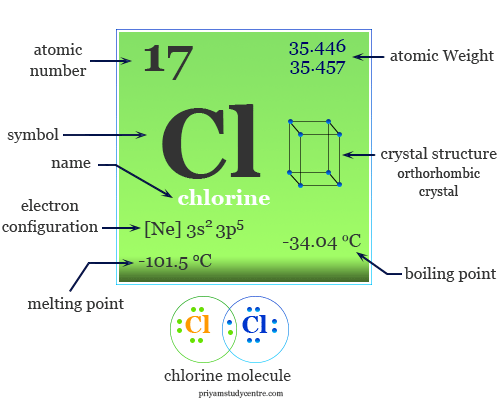 It is used widely as a bleaching agent in paper, pump, and textile industries. It is found mostly in seawater as sodium, potassium, calcium, or magnesium chloride. These chlorides are used from the very early days of our civilization.

The chemical properties and reactivity of chlorine are intermediate between halogen elements fluorine and bromine.

The bond energies trend of the halogen family does not decrease from fluorine to iodine. It is due to the small size, low electric polarization, and absence of vacant d-orbitals for chemical bonding in fluorine molecules.

The gradual decrease in bond energy from Cl2 to I2 exhibits poorer overlap with increasing overlapping orbitals. It shows that chlorine chemistry is different from fluorine. It exhibits positive oxidation states.

Chlorine is dissolved in many organic hydrocarbons but sparingly soluble in water, during which they disproportionate into HCl or HOCl.

Chlorine on the periodic table

Chlorine is found in period 4 and group 17 in the periodic table. It is a p-block eminent which lies between fluorine and bromine. 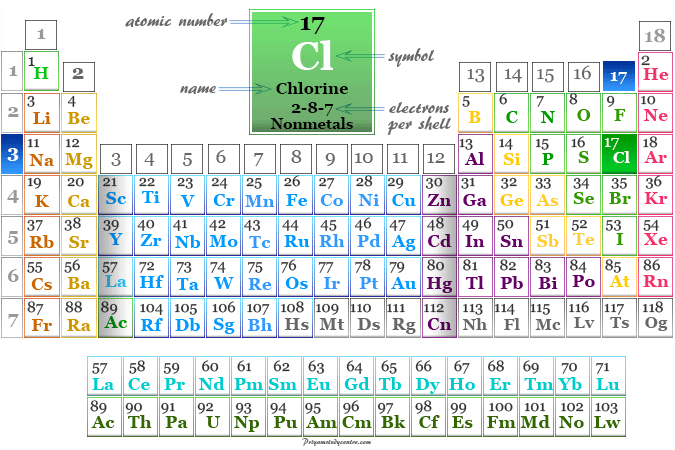 Scientific research and uses of different rock salt (common salt or sodium chloride) in our environment are associated with the very early history of our incident civilization.

Around 1630, chlorine gas was first developed in the chemical process but was not recognized as a chemical element.

The Swedish chemist Carl Wilhelm Scheele in 1774 discovered a greenish-yellow gas by reaction of magnesium with hydrochloric acid but he fails to recognize the chlorine gas.

In 1810, English chemist Humphry Davy establishes that it is an element. He suggested the name of chlorine gas from the Greek word chloros, meaning yellowish green.

The term halogen was given by J.S.C. Sch weigger for its ability to form salts with metal atoms.

Where is chlorine found?

In different types of landlocked seas like the Caspian Sea and the Dead Sea, salt concentration increases up to 30 percent.

It was also found in brine wells and rock salt deposits. A small amount is found in the blood and milk of living organisms.

Chlorine gas is readily prepared in the laboratory by oxidation of hydrochloric acid with manganese dioxide (MnO2) or potassium permanganate (KMnO4).

On the industry or technical scale, chlorine gas is obtained by electrolysis of sodium chloride or in an aqueous solution (brine). The metallic sodium, hydrogen gas, and sodium hydroxide is the by-product which is the most valuable materials.

In this process, we use mercury cathode, the metal being gradually discharged owing to alarming mercury pollution through the water and energy efficient process. Due to the possibility, we use traditional diaphragms for the separation of electrodes by the membrane.

The old Deacon process of oxidation of hydrogen chloride by air in presence of CuCl2 chemical catalyst at 450 °C is also triad again for industrial production of Cl2 gas.

The chemical equilibrium is shifted to the right by converting the Cl2 to dichloroethane uses for the production of vinyl chloride.

About 25 million tonnes of chlorine gas are produced annually in the world by most industrially developed countries. The main uses of chlorine are,

It reacts with almost all the elements in the periodic table except helium, neon, and argon. Therefore, chlorine forms a wide range of halides. The compounds are formed by simple ionic or covalent bonding or molecular species or polymeric species.

In addition to such binary halides, it forms many oxohalides, hydroxohalides, and complex halides formed by several elements. AlCl3, TiCl4, PCl3, SbCl3, FeCl3, and PbCl4 are the most common examples of metal or nonmetal halides.

Hydrogen chloride or hydrochloric acid is an important compound of chlorine known to the chemist from the earliest time. It is used largely in the chemical industry.

Hydrogen chloride is conventionally prepared by the reaction of sodium chloride with concentrated sulfuric acid or burning hydrogen in Cl2 gas.

The oxides of halogens are unstable chemical compounds. The higher oxides are beings rather stable than the lower ones. The stability of oxides of I2 is greater than that of Cl2 while the oxides of Br2 are the least stable.