What is aluminum metal?

Aluminum (symbol Al) or alumium is a chemical element or silvery-white, lustrous, low melting, soft metal of Group 13 (IIIA) or boron family of the periodic table uses widely in our everyday life. Aluminum is the third most abundant chemical element after oxygen and silicon. 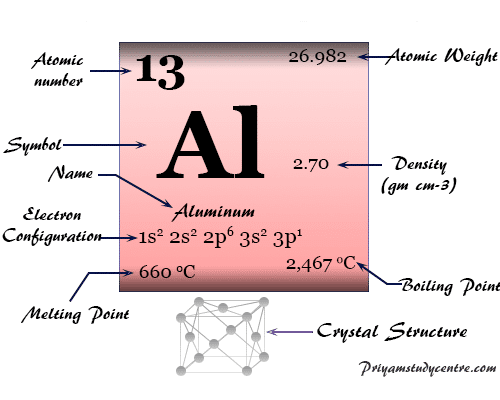 It is the most abundant metallic element in the earth’s crust (8 percent by weight).

Al differs from the first member of Group 13 (boron) due to its chemical properties, high reactivity, and cationic chemistry in an aqueous solution.

It combines most of the nonmetallic elements like nitrogen, sulfur, and halogens. It forms intermetallic aluminum compounds with a large number of metals.

The common oxidation number or states of metal +1 +2 and +3. Due to decreases in lattice energy with increasing size, aluminum should be likely to form an Al+3 ion. Due to large ionization energy not compensated by weak lattice energy, it commonly attains a +3 state by covalent bonding.

Aluminum in the periodic table

Aluminum is found in group 13 and period 3 of the periodic table. It is a metalloid that lies between boron and gallium. 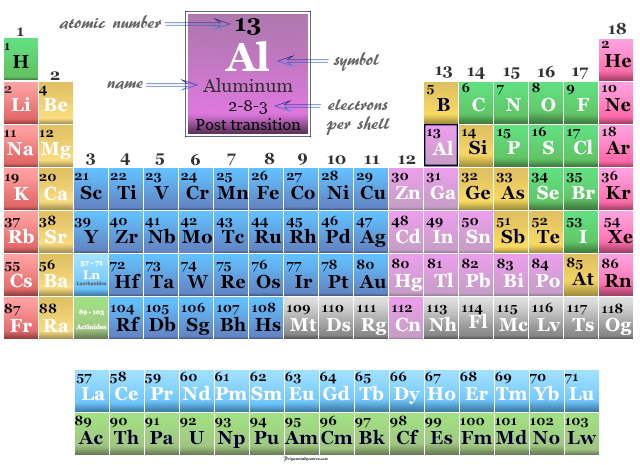 Where is aluminum found?

The most abundant element, aluminum found in various silicate minerals like mica, feldspar, kaolinite, and clay. The only fluoride mineral is cryolite (Na3AlF6), found in Greenland.

The most important minerals found in nature as oxide and anhydrous hydrated oxides. Oxide like Corundum (Al2O3) is used in Gems (ruby, sapphire) due to its hardness.

Where is bauxite found?

Alum was the compound of aluminum widely used in Rome for the production of different types of medicine and dyes in textiles.

British chemist Sir Humphry Davy failed to isolate the metal but suggested the name of the element aluminum or alumium.

In 1825 Denmark physicist Hans Christian Orsted first discovered the metal by reducing aluminum chloride (AlCl3) with potassium amalgam. Commercial production of the element started in 1954 by electrolysis of NaAlCl4.

It can be produced electrolytically from bauxite in electrochemical cells.

A mixture of cryolite, CaF2, AlF3, Al2O3, Li2CO3 in the electrolyte is used because it has a lower melting point, permits larger current flow, and reduces fluorine emission.

The electrode reaction for the production of aluminum,

The molten aluminum sinks to the bottom of the cell and drained out. The surface of the electrolyte was covered with a layer of coke, which oxidized evolving oxygen for the protection of valuable electrodes.

It is not attacked by water owing to the presence of a protective coating. If the film is removed by amalgamation, water forms [Al(OH)3 + H2]. All the elements of Group 13 have different chemical properties and reactivity.

The electronic structure of Al suggested that it forms mostly trivalent chemical compounds. The aluminum compounds in the +3 state are dominantly by covalent chemical bonding. In suitable conditions, they formed +2 and +1 compounds like AlCl, Al2O, and AlO.

The hydride of Al is a colorless involatile solid, thermally unstable above 150-200 °C. It is a strong reducing agent and adducts with strong Lewis bases.

The tetrahydro complex of Al like LiAlH4 is a very important chemical compound widely uses in organic chemistry or the reduction of hydrocarbon.

All four trihalides of aluminum have the general formula AlX3, where X = fluorine, chlorine, bromine, and iodine. All the compounds may be prepared by a direct combination of the metal with halides.

The properties of the trihalides are very wide. For example, fluoride is an ionic crystalline solid.

Alumina is an important chemical compound of aluminum with two structural forms, α-Al2O3 and ϒ-Al2O3.

The α-Al2O3 occurs in nature as corundum which is resistant to water and acids and is used in Gems.

The γ-alumina is distorted, less dense, and soft with high surface tension in the liquid form. These qualities of γ-alumina are excellent reagents for dehydration, decolorization, and absorption chronograph.

β-alumina is now being developed as a ceramic ion conductor useful for high-energy batteries. Large quantities of alumina are used for the commercial production of aluminum.

In recent years aluminum acquired a high position among the metals due to its several exclusive properties,

The corrosion-resistant properties are due to the protective oxide layer in metal. Pure aluminum is quite soft and weak but the commercial form contains small amounts of silicon and carbon is hard and strong.

Magnesium element Magnesium is a chemical element, alkaline earth metal of Group 2 (IIA) of the periodic table with symbol Mg and atomic number 12....