What is column chromatography?

Column chromatography is an analytical procedure for the separation and purification of inorganic and organic compounds. It can be used to separate substances based on differential adsorption of compounds to the adsorbent like activated alumina or silica gel. 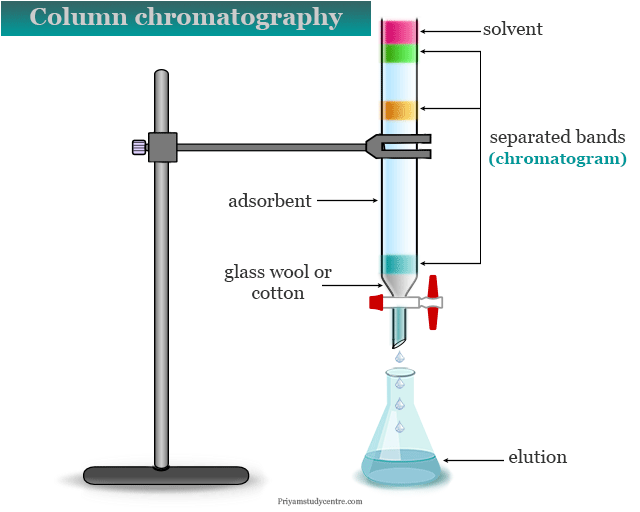 Solvent selection is the most important step in the column chromatography procedure because the affinity of adsorption depends on the selection of solvent.

Column chromatography procedure is used for separation of a mixture of different compounds by following steps,

Organic compounds such as sucrose, starch, and insulin act as weak adsorbents. The absorbability of organic compounds depends on the nature and number of the polar groups present in the particular compounds.

The polarity of the solvent gradually increases by eluting absorbed martial. The rates of elution are controlled by varying activities of absorbent and polarities of solvent. It is purely a trial and error procedure.

The polarity and selection of solvent is the most important step in the column chromatography procedure. The order of polarity of commonly used solvents are,

Packing of the column in the chromatography procedure is most important due to avoiding air bubbles and errors in separation. The column tube is cleaned and dried perfectly.

When the solvent is run, it should not be allowed to dry until the experiment is complete. Columns in chromatography are prepared by dry packing or wet packing.

We used a glass tube fitted with a stopper in dry packing. Some glass wool or cotton wool is placed at the top of constricted portion of the glass tube by using a glass rod. The glass allows solvent to pass but retains the absorbent in the column which is placed in a vertical position.

A weighted amount of absorbent is added to a small portion of the tube for the setting of absorbent. The column is washed with eluting solvent before we used it. A disc of filter paper is placed to protect the surface of the glass tube.

The sample placed on column chromatography procedure is either a solvent solution or a direct liquid mixture of the sample. If a solid sample is insoluble in nonpolar solvent, we used polar solvent.

It is poured into a small amount of adsorbent and taken in a porcelain basin to prepare the thick slurry. The solvent is completely evaporated by stirring with a glass rod when the slurry turns power form.

A solution of the sample mixture in a suitable solvent is allowed to pass down slowly to the column. When the individual components are selectively absorbed, a chromatogram is displayed.

It is a coloured or colourless band or zones in the column chromatography procedure. Therefore, the individual coloured band or zones are separated with organic solvents and collected in a 25 ml or 50 ml conical flask.

If the bands in the chromatogram are colorless, a quartz column is used instead of a glass column. It is placed in the light of a mercury lamp for detecting the band with fluorescence. The colurless compounds may also be detected by the reagents which formed colour with the components of the sample mixture.

Column chromatography procedure is widely used for the separation, 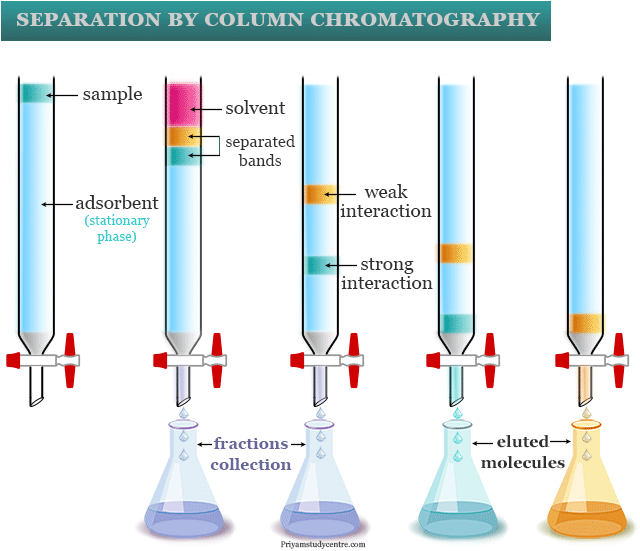 We also used the column chromatography principle for the separation of organic compounds such as anthracene from anthracene picrate and methyl orange from methyl blue.

Anthracene picrate is strongly absorbed by the alumina column but anthracene is weekly absorbed. Similarly, methyl orange will be absorbed strongly due to the presence of the -SO3H group but methylene blue will be weakly absorbed.

A column of alumina is prepared by wet packing using ligroin solvent for the separation of leaf pigments by column chromatography procedure.

Column chromatography is one of the most common procedures for the separation and purification of protein. Generally, proteins are long-chain flexible amino acids. They are either hydrophobic or hydrophilic, depending on the relative amount of amino acids which they contain.

For protein separation and purification, a column is packed with small beads that are coated with ion exchange resin. It attracts hydrophobic amino acids to the resin beads.

A series of solvents with different concentrations can be used to separate or purify many proteins from each other by column chromatography procedure.

The affinity column chromatography procedure is based on the exceptional ability of biological substances such as proteins to bind specifically and reversibly to other substances like affinity ligands. It is used mainly for the purification and separation of biological macromolecules.

Biological macromolecules can be easily released from affinity complexes by dissolving or changing the concentration of the solvent. Such dissociation may also be possible by altering pH scale, temperature, and ionic concentration.

What is spectrophotometry? Spectrophotometry is a technique in the electromagnetic spectrum for the measurement of relative energy (emitted, transmitted, or reflected) as a function of...