What is gas chromatography? 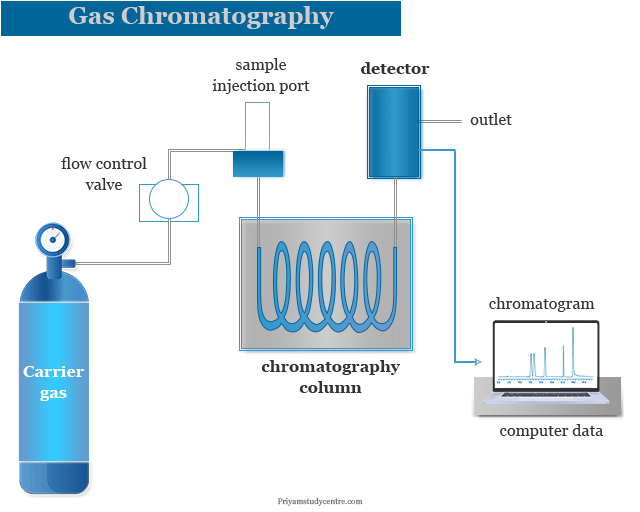 The mobile phase which we usually used in gas chromatography is noble gas or an unreactive gas such as helium, argon, nitrogen, and hydrogen. A sample is injected into a heating block where the compound is vaporized. Gas chromatography got a boost when gas liquid chromatography was invented with good instrumentation.

It is used for testing the purity of substances or the separation of a particular component from a mixture. The success and failure of gas chromatography analysis or separation depend mainly on the retention time.

Pressure is adjusted within the limits of 1 to 4 atmospheres while the flow control valve measures 1 to 1000 liters per minute of gas. Flow valves are adjustable by a needle valve mounted on the base. The preferred carrier gas may be helium, argon, nitrogen, and hydrogen due to their high thermal conductivity.

Samples are injected by a microsyringe through a self-sealing silicon rubber septum in a heated metal. The metal bock is a heated electrical heater. We used different sizes of injection ports for the injection of a sample.

The gas chromatography column can be made by tubing coiled into an open spiral. We used copper or stainless steel for high-temperature operation. The velocity of the carrier gas flow rate depends on the inner diameter of the chromatographic column. The usual size of the column is 2 meters.

The detector can detect the arrival of components coming from the column to provide an electrical signal. Pressure and temperature detector are the two major groups of detectors used in gas chromatography.

The detector in gas chromatography instrumentation is situated near the column to avoid the condensation of liquids or detect the sample before decomposition.

The choice of recorder determines the ultimate accuracy of the gas chromatogram. The full-scale pass response should be 1 second. Sometimes amplification of signals is essential to give a gas chromatogram.

In the gas chromatogram, we have a Gaussian error function curve that is symmetrical. If a substance has no affinity for the stationary phase, the partition coefficient, K = 0. Therefore, it will not be retained by the column.

Principle and working of gas chromatography

Separation in gas chromatography is feasible by partitioning the sample between a mobile gas phase and a thin layer stationary phase of nonvolatile, high boiling liquid held on the solid support. The idea of fractioning gases by passage over solid or immobilized gases was first introduced in 1941. It is popular after 1955.

Gas chromatography is usually used for the identification and analysis of organic molecules and polymers. In elemental analysis, the class of pyrolysis reactions where the organic products break down into carbon dioxide and water can be carried out by a gas chromatography instrument. It can be used in a wide number of industries with different types of applications.

Many new research papers can be published with the help of gas chromatography techniques. It is used mainly for researching and analyzing natural products and meteorites that fall to earth from space.

The gas chromatography instrument is applicable in many forensic investigation and detection. For example, the causes and time of death can be investigated by this instrument.

Air pollution is a major problem in today’s life. It can be negatively affected our health. Gas chromatography instrumentation is used for monitoring levels of air pollution caused by different types of air pollutants.

There are several advantages of gas chromatography. The most common advantages are,