Iodine is a chemical element of Group 17 (VIIA) of the periodic table. It is a member of the halogen family with atomic number 17 and symbol I. It is widely used in the manufacturing of common organic compounds like iodoform (CHI3) and methyl iodide (CH3I). 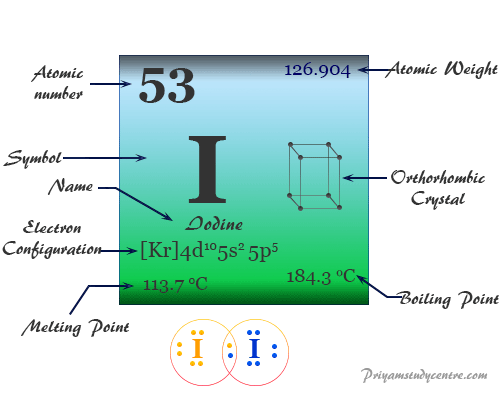 It is the stable and heaviest member of the halogen family placed below fluorine, chlorine, and bromine.

The essential element iodine is used in our body for making thyroid hormones to control metabolism and many other important biological functions.

In 1811, iodine was discovered by the French chemist Bernard Courtois. The name of the element suggested by Joseph Louis Gay-Lussac from the Greek word ioeides means violet colored.

Iodine in the periodic table

It is placed in group 17 and period 5 in the periodic table. It is a member of the halogen family which lies between bromine and astatine. 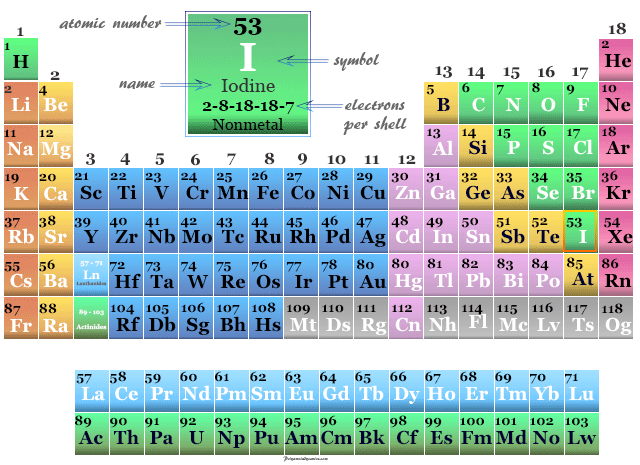 Polyatomic cations X2+ and X3+ are known for iodine. Some properties of the element are given below the table,

It is less abundant among the halogens group, only 0.46 ppm (61st order). Brains contain iodide ions up to 100 ppm.

Ocean water contains I2 molecule up to the extent of 0.05 ppm but certain marine life like Laminaria and Fucus can concentrate it up to 0.45 percent of their dry weight.

Iodine has thirty-seven known isotopes but only one stable natural isotope like 127I. The other is radioactive isotopes with a very short half-life.

Radioactive decay of I-131 is used in nuclear medicine and radiation therapy for the diagnosis and treatment of thyroid gland disorder.

Depending upon the sources, it can be produced by different types of processes. In the United States and Japan, natural brines containing iodides may be chlorinated to evolve iodine gas. The gas was swept by air and purified by sublimation.

In another method, the iodide is precipitated by the silver nitrate solution.

Seaweeds are collected, dried, and brunt. The ash is treated with water and soluble iodide separated from other insoluble materials. The solution is concentrated to crystallize other soluble salts.

The final filtrate is distilled with sulfuric acid and manganese dioxide in a cast iron resort for the production of iodine.

Iodine has an electron configuration [Kr] 4d10 5s2 5p5, with seven electrons in the ultimate quantum shell. Like other halogens, it has also one electron short of the next noble gas.

The noble gas configuration is achieved by gaining one electron from reactive surroundings or sharing electrons by covalent bonding. The iodine molecule is formed by covalent chemical bonding with the molecular formula I2.

Iodine is the weakest oxidizing agent among all stable halogens due to low ionization energy and low electron affinity. Other hands, fluorine is the most chemically reactive element or halogen due to its electronegativity and low bond energy.

Fluorine combines directly most of the metals and nonmetals. Some metals like iron, copper, nickel, and aluminum form a protective layer of fluoride ions which prevents further reaction.

The iodine atom has the tendency to form compounds in which it is present as a cation to shows basic properties. For example ICl, IBr, INO3, I2SO4, I(CH3COO)3, etc.

The color of the halogen shows interesting gradation from pale yellow (fluorine), greenish-yellow (chlorine), reddish-brown (bromine). The color of the gaseous diatomic halogen molecules arises due to the absorption of ultraviolet visible radiation for the π∗ → σ∗ transition.

The separation between the two levels decreases from the F2 to I2 molecule which shifts the absorption to lower frequencies.

The iodine molecule transmits strongly in the violet region which is unchanged by dissolving many organic solvents like hydrocarbon and carbon tetrachloride.

Iodine is the least reactive and stable halogen but it is still reactive among the periodic table elements. The effect of increasing size among the halogens, iodine shows the tendency to attain higher covalency and coordination number.

For example, it alone forms IF7 while chlorine and bromine do not go beyond ClF3 and BrF5 respectively.

All the halogen reacts with hydrogen to form volatile covalent hydrides. The reactivity towards hydrogen gradually falls from fluorine to iodine.

Hydrogen iodide is obtained by treating a mixture of water and red phosphorus with iodine. The hydrides HCl, HBr, and HI are gases at ordinary temperature but HF is liquid because of the association through hydrogen bonding.

All the hydrides ionize in an aqueous solution due to solvation. Weaker bond dissociation energy makes all the three hydracids like HCl, HBr, and HI, strong acids with a low pH scale.

Almost all elements of the periodic table except helium, neon, and argon form binary compounds with iodine to give a wide range of iodides.

The elements like oxygen, nitrogen, fluorine, chlorine, bromine have electronegativity higher than that of iodine. Therefore, the binary compounds of such elements are not called iodide, they are called oxides, nitrides, fluorides, chlorides, and bromides.

Most metal iodides have ionic compounds but the partial covalent character is developed depending upon the charge and oxidation state of the metal. Nonmetal iodide tends to form by covalent bonding.

Oxides of halogen are unstable compounds and the higher oxides are more stable than the lower ones. Iodine oxides are the most stable among all halogen oxides.

I2O5 is the most stable oxide but relatively less stable oxides like I2O4 and I4O9 also formed by iodine molecules. I2O5 is a hygroscopic solid, it dissolved in water to form HIO3.

The stability of the oxoacids and their anions in an aqueous solution is determined by redox reactions, together with significant kinetic influences.

Iodic acid (HIO3) is an important oxoacid of iodine formed by boiling iodine with ten times its weight of fuming nitric acid.

Crystalline solid potassium iodate was prepared by heating I2 with a concentrated solution of KClO3 in presence of little HNO3. It is a good oxidant used in many oxidimetric titrations.

Like antimony and tellurium, it also exhibits a tendency to attain higher coordination numbers and forms H5IO6.

What is Iodine used for?

World production of iodine lies around 16,000 tonnes per annum, Japan alone nearly one-half of this amount. One-half of Iodine is used in the production of various organic compounds like iodoform (antiseptic) and methyl iodide.

Other common uses of iodine and its compounds are given below,