What is methane gas?

Methane gas (chemical formula CH4) also called marsh gas is the simplest hydrocarbon compound of the alkanes or paraffin with a regular tetrahedral chemical structure. Natural gas is the main source of methane molecules. It is used as a liquid fuel in our everyday life. 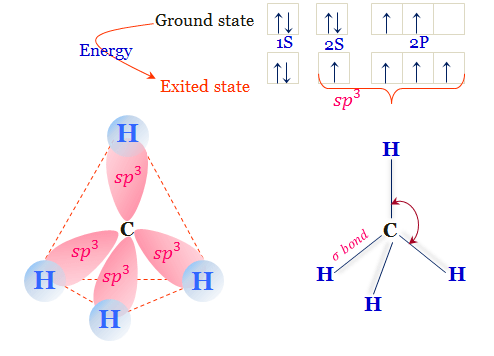 The fermentation of sewage sludge by bacteria yields methane gas of about 70 percent. It also forms 40 percent of the volume of coal gas. Methane gas is part of the greenhouse gases that cause global warming by trapping heat.

Mixing these four atomic orbitals give four equivalent sp3 hybrid orbitals. These hybridized orbitals are directed towards the corner of the regular tetrahedron.

Each of these half-filled hybrid orbitals of carbon atom chemical bonding with half-filled atomic orbitals of the hydrogen atom. Therefore, the methane molecule has a tetrahedral shape with an H-C-H bond angle of 109.5°.

How to produce methane gas?

Methane is the main part of natural marsh gas synthesized by striking electricity between carbon electrodes in atmospheric hydrogen or by the heating mixture of carbon and nickel at 475 °C in the presence of hydrogen.

Sabatier and Senderens in 1897 invented the equation for methane production by passing a mixture of hydrogen and carbon monoxide or carbon dioxide over finely divided elements like nickel at about 300 °C.
CO + 3H2 → CH4 + H2O
CO2 + 4H2 → CH4 + 2H2O

In the laboratory, it is generally prepared by heating a 1:3 chemical composition of sodium acetate and soda-lime.

It is also prepared by the reduction of methyl iodide with dissolving metals or by strong base lithium aluminum hydride.
CH3COONa + (NaOH + CaO) → CH4 + Na2CO3.

Marsh gas having the common name methane is the simplest natural unsaturated hydrocarbon compound in an alkenes series with the molecular formula CH4.

This gas is less soluble in water but more soluble in organic solvents (alcohol and ether). Therefore, 100 ml of water is used to dissolve about 5 ml of CH4 gas at 20°C.

In chemistry, the thermodynamics combustion of the methane gives non-luminous flame in air or oxygen by forming carbon dioxide and water.

Methane as a greenhouse gas

Now a serious concern about the increase in the use of methane, carbon dioxide, CFC, ozone gas, and nitrous oxide. They raise the global temperature of our environment. It is known as the greenhouse effect. The greenhouse is uses in winter counties for artificial heating.

The contribution to global warming of CH4 gas is about 16 to 20 percent. Therefore, CH4 heats the earth’s atmosphere by trapping electromagnetic spectrum radiation (IR) from sunlight or heat reflected from the earth’s surface.

Effects of methane on the environment

Recently due to many global activities like the industrial revolution and the use of natural gas, the concentration of greenhouse gases (CFC, carbon dioxide. methane, etc) has increased.

The average temperature of the earth’s atmosphere rises about 2.5 °C in the next 30 years which results in a major climate change in the world.

The polar ice caps will melt indirectly by greenhouse gases. These consequently increase the sea level. Many seaside localities including some big Iceland completely submerged.

Therefore, to save our civilization, we use non-fossil fuel or renewable energy sources like solar, wind, hydroelectric, and nuclear power instead of natural gas like methane.