What is hydrogen bonding? 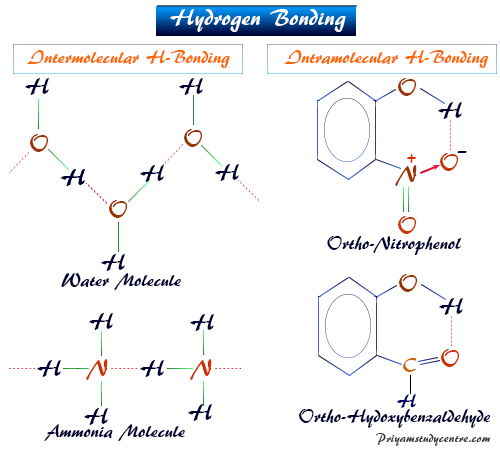 The electronic configuration of hydrogen is 1s1. The nucleus of hydrogen is surrounded by only one electron in 1s orbital with the maximum capacity of two electrons. Therefore, hydrogen has the capability of forming a single covalent chemical bond with another atom. If the covalently bonded atom is strongly electronegative, the bonds become polar.

The positive hydrogen end of the dipole can weakly link or bond with another negative dipole end present in the same molecule like o-nitrophenol or another molecule like water, ice, ammonia, etc. This weak secondary link between two electronegative atoms through hydrogen atoms is defined as intramolecular or intermolecular hydrogen bonds.

It is mainly two types,

The hydrogen linking occurring between two similar or different molecules is called intermolecular hydrogen bonding. Water, ammonia, and hydrogen fluoride are examples of such types of molecules.

In hydrogen fluoride (HF), the positive end of one dipole attracts the negative end of another similar dipole. These molecules are associated together to form the cluster, (HF)n.

The hydrogen bond in water is important to the existence of our world. In absence of hydrogen bonds, water would be a gas at ordinary temperature. Therefore, without liquid water, we cannot imagine animal or vegetable life.

In hydrogen sulfide, due to the small electronegativity of sulfur atoms, H2S does not form (H2S)n type cluster by H-bonding. Therefore, water exists in liquid form but hydrogen sulfide exists as a gas molecule. 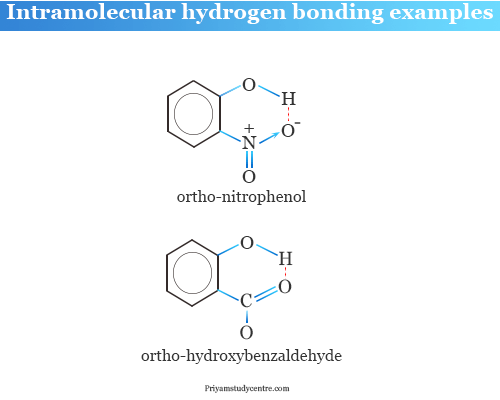 The unstable link or hydrogen bond uses to explain the unexpected physical properties like density, melting point, and boiling point of the solid, liquid, gaseous inorganic and organic compounds.

For example, the crystalline solid form of phenol or carboxylic acid is supported due to the formation of the hydrogen bond. 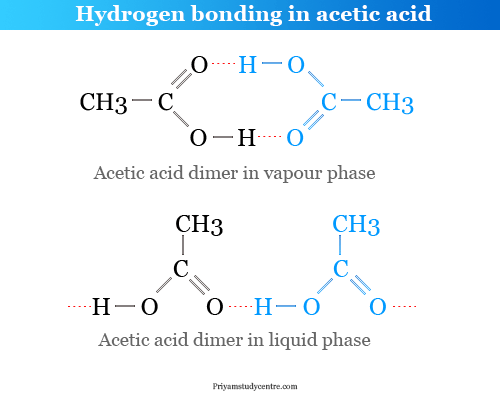 Ortho hydroxy benzaldehyde also restricted hydrogen-bond within the same molecule. It leads to the weakening acid properties of the compound.

Due to H-bonding, the scope for the formation of hydrogen ions in the solution is limited which increases the pH scale of the solution.

It does not involve any sharing of the electron particles. Hence the characteristics of the hydrogen bond are quite different from the normal covalent bond.

Ice is a crystalline solid. In the ice crystal lattice, the oxygen-atom tetrahedrally is surrounded by four hydrogen atom.

In an ice crystal, every water molecule is associated with the other four water molecules by H-bonding in a tetrahedral fashion with a large amount of space.

Why density of water is maximum at 277K?

When ice heat melts from 0 to 4 °C or 277K, the hydrogen bonds are broken down and the space between water molecules decreases. The density of water is maximum at 4 °C or 277K.

Above 4°C, the kinetic energy of the molecules is sufficient to disperse from each other, and the concentration steadily decreases to form water due to breaking Hydrogen-bond.

In the chemical and biological science, hydrogen bonding is very important for the existence of our environment or our life. Due to the absence of hydrogen bonds, the liquid water or ice would be in the gas phase at ordinary temperatures.

Therefore, without liquid water or the absence of hydrogen bonding, we can not imagine the existence of animal or vegetable life in our environment.