What is Planck’s quantum theory? 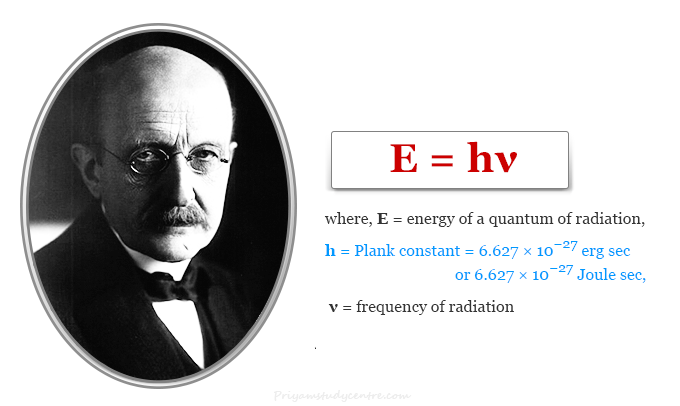 A quantum of energy emitted by light is called a photon. A black body absorbs completely all electromagnetic radiation falling on it and conversely, it emits radiations of all wavelengths. Planck quantum theory consists of the following postulates,

A black body or blackbody in physics is an idealized surface that absorbs all radiant energy falling on it. The name “black body” is given because it absorbs radiations of all wavelengths. 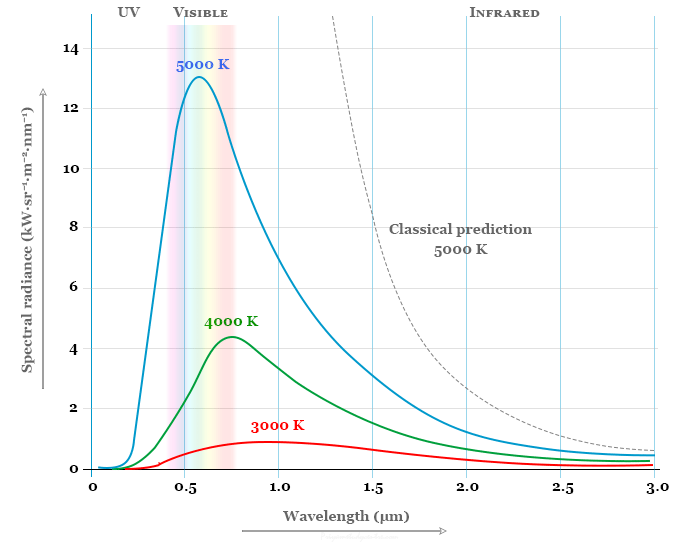 This phenomenon may not be explained by Maxwell’s theoretical consideration. Therefore, in 1900 the German physicist Max Planck proposed Planck’s quantum theory for the calculation of the blackbody radiation.

Planck’s equation helps to calculate the energy of photons when their frequency is known. But if the wavelength (λ) is known, we can use the equation,
E = hc/λ
where c = velocity of light

In 1924, de-Broglie combined Planck’s quantum theory and Einstein’s theory of relativity to formulate a relation known as the de-Broglie relation,
λ = h/mc = h/p
where mc = p = momentum of the photon

In 1905, Albert Einstein explained the photoelectric effect on the basis of Planck’s quantum theory. According to this theory, light is composed of discrete particles or photos having energy hν. When a photon hits on the metal surface (sodium, potassium, zinc, etc), it gives up its entire energy to the electron on the surface.

The entire energy of the photon present in radiant light must be accepted by a single electron. It cannot be divided among all the electrons present on the metal surface as supposed by classical theory.

Einstein suggested that a certain quantity of energy, called work function (w) is utilized to overcome the attractive forces between the electron and the positive nuclei of the metal. The rest part of the energy goes along with the ejected electron in the form of kinetic energy.