de Broglie wavelength relation pointed out that just like photons of light, electron has also both particle and wave properties of matter. It was proposed by French physicist Louis de Broglie in 1924. It is called de Broglie’s hypothesis. 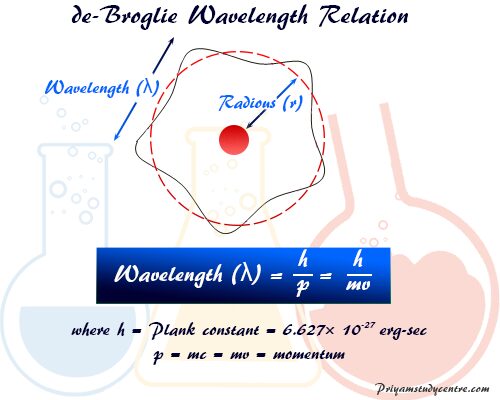 He suggested that electrons travel in waves, analogous to light with a definite wavelength or frequency. The de Broglie hypothesis could be fitted to derive the relation that the Bohr model proposed.

In physics or chemistry, the combination Einstein’s mass energy formula and Planck’s quantum theory are used to deriving the de Broglie relation. It is used for calculating the wavelength and frequency of electromagnetic spectrum radiation. This wavelength relation was tested by Davisson Grammar experiments and Bohr’s theory of hydrogen atoms.

de Broglie proposed the wavelength relation with the help of the Planck equation and Einstein’s mass energy formula of matter. The mass of the photon, the smaller the light quanta given by mass energy equation of Einstein. If the wavelength of light = λ, frequency = ν, and energy = E.

de Broglie relation extended light particle to the dynamics particles of matter and calculate the mass, momentum, wavelength frequency, and energy of an electron.

According to de Broglie’s equation
λ = h/mv
or, mv = h/λ
where λ = wavelength of the moving electron.

A standing wave produces a stationary pattern or fixed profile. It does not travel beyond the allowed space.

Experimental verification of the de Broglie equation was obtained by Davisson and Germer in 1927. The success comes by diffracting a beam of electrons from the nickel surface. The pattern of electron diffraction obtained by them is similar to that of x-ray diffraction.

When the particle-like light photon or electron is subjected to the potential difference V, it acquires a velocity v  and generates two types of energies, potential and kinetic energy.

From the above two relations,
wavelength (λ) = h/√2mVe

This is the derivation between emission kinetic energy and de Broglie wavelengths relation of photon or electron.