What is electrochemical cell? 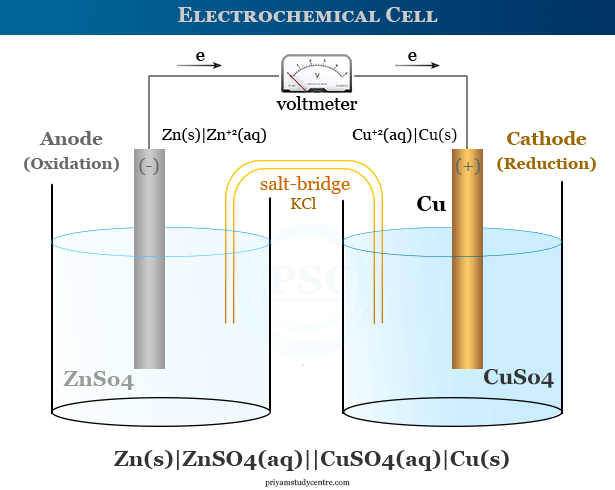 Electrochemical cells are also called Galvanic or Voltaic cells after the name of the scientist Luigi Galvani and Alessandro Volta.

What is a dry cell battery?

A zinc-carbon battery is an example of a common dry cell in which a zinc plate is used as a negative electrode and a carbon rod is a positive electrode. Manganese dioxide (MnO2), ammonium chloride (NH4Cl), and zinc chloride paste are used as an electrolyte.

Lr6 (basic), Kr157/51 (nickel-cadmium), Fr6 (lithium-iron-disulphide), and Hr6 (nickel-metal-hydride) are the other examples of the dry cells which we used widely in our daily life.

An electrolytic and galvanic cell is the two common types of electrochemical cells. The main difference between these two cells are given below the table,

An equation that describes the reaction at a single electrode of an electrochemical cell is called a half-cell reaction. An electrode and the surrounding solution in the electrode components are called a half cell.

Galvanic cell or voltaic cell is commonly used for the supply of electric energy for different commercial purposes. They are mainly two types,

Primary cells are the electrochemical cell where chemicals are used for the production of electrical energy. They cannot be brought back to their original state

Leclanche or Dry cell is a primary cell in which zinc plate is a negative electrode and carbon rod is a positive electrode. The zinc plate usually covers the outer part of the cell.

A secondary cell is a chemical cell that we used mainly for the storage of electricity and purification of metals.

The chemicals used up in secondary cells can be brought back to their original state by charging with current from an external source. Therefore, the cell again fits to supply energy as before. The process can be repeated over and over again.

A fuel cell is an electrochemical cell in which the chemical energy available from a fuel (hydrogen or methane) is converted to electrical energy by its oxidation. The cells produce low voltages but they are capable of supplying direct current for considerable periods.

Fuel cells provide power at a low cost and lees attention required for their maintenance.

The bye products obtained from the fuel cell are harmless and they cannot cause pollution of our environment. Therefore, they are used as a clean source of energy.