Tungsten is a chemical element or strong, silvery transition metal of Group 6 (VIB) of the periodic table with symbol W and atomic number 74. It is used for making steel and lamp filaments due to its hardness. The symbol of tungsten is derived from the name Wolfram which is still used in some literature. 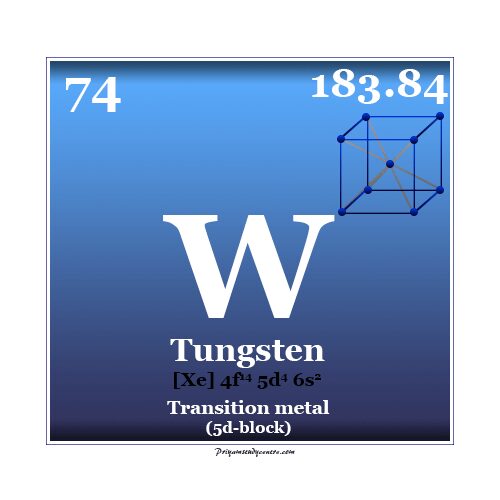 The properties of tungsten and molybdenum are very similar but the chemistry of these two metals are slightly different. It has the highest melting point among all metals and second after carbon among all periodic table elements. Tungsten is placed in the d-block of the modern periodic table with group members chromium and molybdenum.

The mineral tungsten (Swedish heavy stone CaWO4) was studied in 1751 by Cronstedt. In 1981 Carl Wilhelm Scheele discovered new oxide from this mineral.

Two years later Spanish chemists José and Fausto Elhuyar (two brothers) separated the same oxide from the mineral known as wolframite. They isolated the metal tungsten by carbon reduction reaction of charcoal. The symbol of the tungsten is derived from the name Wolfram. 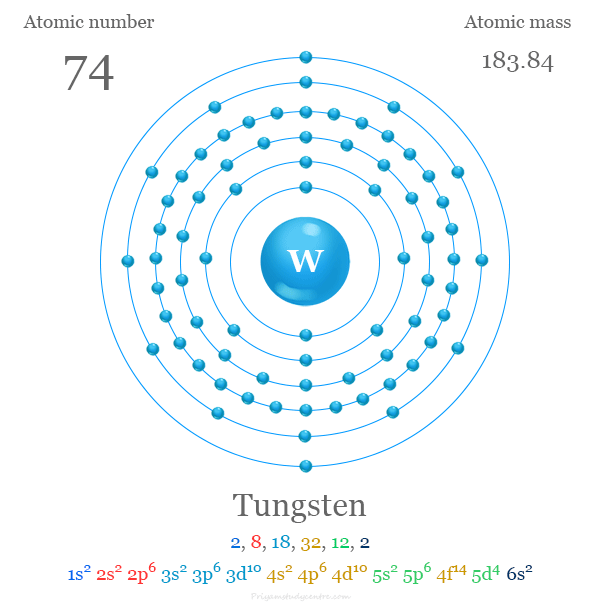 The atomic number of tungsten is 74 and electronic configuration [Xe] 4f14 5d4 6s2. It is the last metal in the third transition series in which all the d-electrons participate metallic bonding.

The metal is very hard, high melting, and relatively unreactive due to the protective oxide layer. It forms typically metallic body-centered cubic crystal lattice like molybdenum. 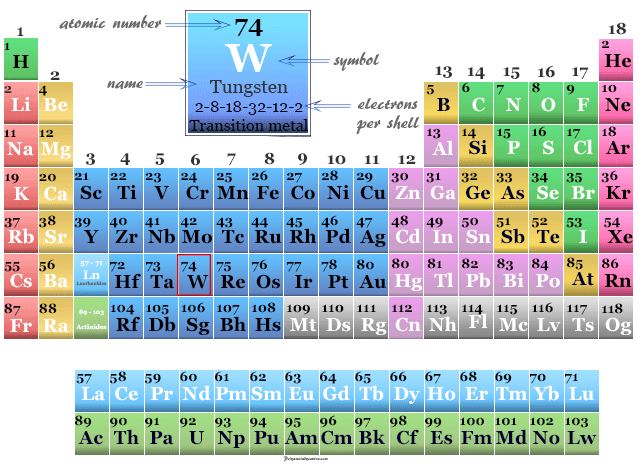 The metals Cr, Mo, and W are the members of Group-VI in the periodic table. The common oxidation number or state of tungsten is +6 (VI).

Where is tungsten found

Tungsten is found in nature mostly as wolframite, Fe(Mn)WO4, and scheelite or calcium tungstate, CaWO4.

Production of tungsten powder from wolframite

The chemistry of tungsten is close to molybdenum. The most common and stable oxidation state of the metal is +6 but the +5 and +4 states are also stable.

Strong reducing properties of the metal are not met before +3 and +2 states. The oxides, fluorides, and oxoacids are formed in different oxidation states.

The yellow WO3 is the end product of heating other compounds of tungsten in the air. It is insoluble in acids. WO3, 2H2O is formed in strongly acidic media. It is called tungstic acid but it is not a hydrated acid.

A few lower oxides like WO2 were obtained by the reduction of trioxide with hydrogen. The acidic nature of the oxides decreases with decreasing oxidation state.

The petahalides of tungsten metal are also known. The yellow halide like WF5 is formed by the reduction of WF6 at 500 to 800 °C. Above 30 °C the yellow solid disproportionate reaction between WF4 and WF6.

The tetrafluoride of the metal is formed by the reduction of hexafluoride with benzene or other hydrocarbons. It is a nonvolatile red-brown chemical compound.

The lower oxidation state of tungsten is unstable and strongly reducing in nature. The metal only forms WCl3 and WBr3 in a +3 oxidation state. Tungsten (II) is completely unstable.

The complex halide of W (II) is W6X12 type (where X = chlorine, bromine, iodine). It forms cluster compounds like (W6X8)+4 X4−. The oxidation state zero is observed in the carbonyl complexes like W(CO)6.

What is tungsten used for?

Tungsten is the only element in the third transition series which function in the biological system. Protein containing the metal is rare and is mainly found in thermophilic anaerobes.

Tungsten also occurs in several enzymes with molybdenum. The mode of the biological function of the tungsten metal in enzymes is involved oxo-transfer of W (VI) to the substrate.