What is zinc metal?

Zinc is a chemical element or silvery lustrous metal of Group 12 or IIB of the periodic table with atomic number 30 and symbol Zn. It is used mainly for making alloys, corrosion-resistant coating, and electrochemical cells or dry cells. 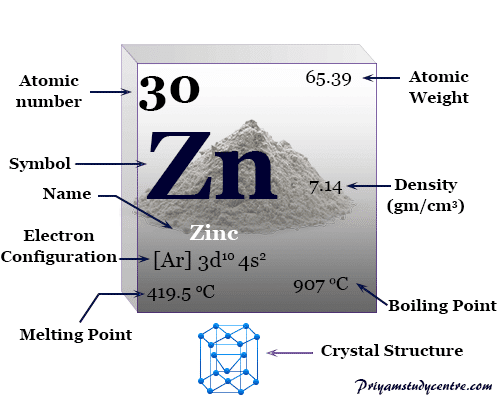 The rise of shielding electrons along the 3d-orbital gradually makes the d-electron, a part of the inner core for the zinc atom. Therefore, it leaves only s-electrons for chemical bonding.

Where is zinc found?

It is found more abundant (76 ppm) in the earth’s crust than copper (68 ppm). Zinc blende (ZnS) and calamine (ZnCO3) are the most common ores of metal. The other minor important ores are franklinite (ZnO, Fe2O3) and willemite (Zn2SiO4).

The making of brass from copper and zinc ores was known from ancient times in Palestine, Greece, Rome, India, and China. The extraction of the metal at this time was difficult.

The name zinc may be related to the German word Zinke meaning spike or tooth. The name also originates from the Latin word leucoma or white deposit.

Zinc has a closed-packed hexagonal crystal lattice with elongated distances between the layers making the metal denser than those of copper and silver.

The low melting and boiling point of the metal reflects the weak participation of the outer ns electron for metallic bonding.

Some physical and atomic properties of zinc are given below the table,

Zinc on the periodic table

It is placed in group-12 and period-4 on the periodic table with group members of mercury and cadmium. Zn is the last member of the 3d-block elements. 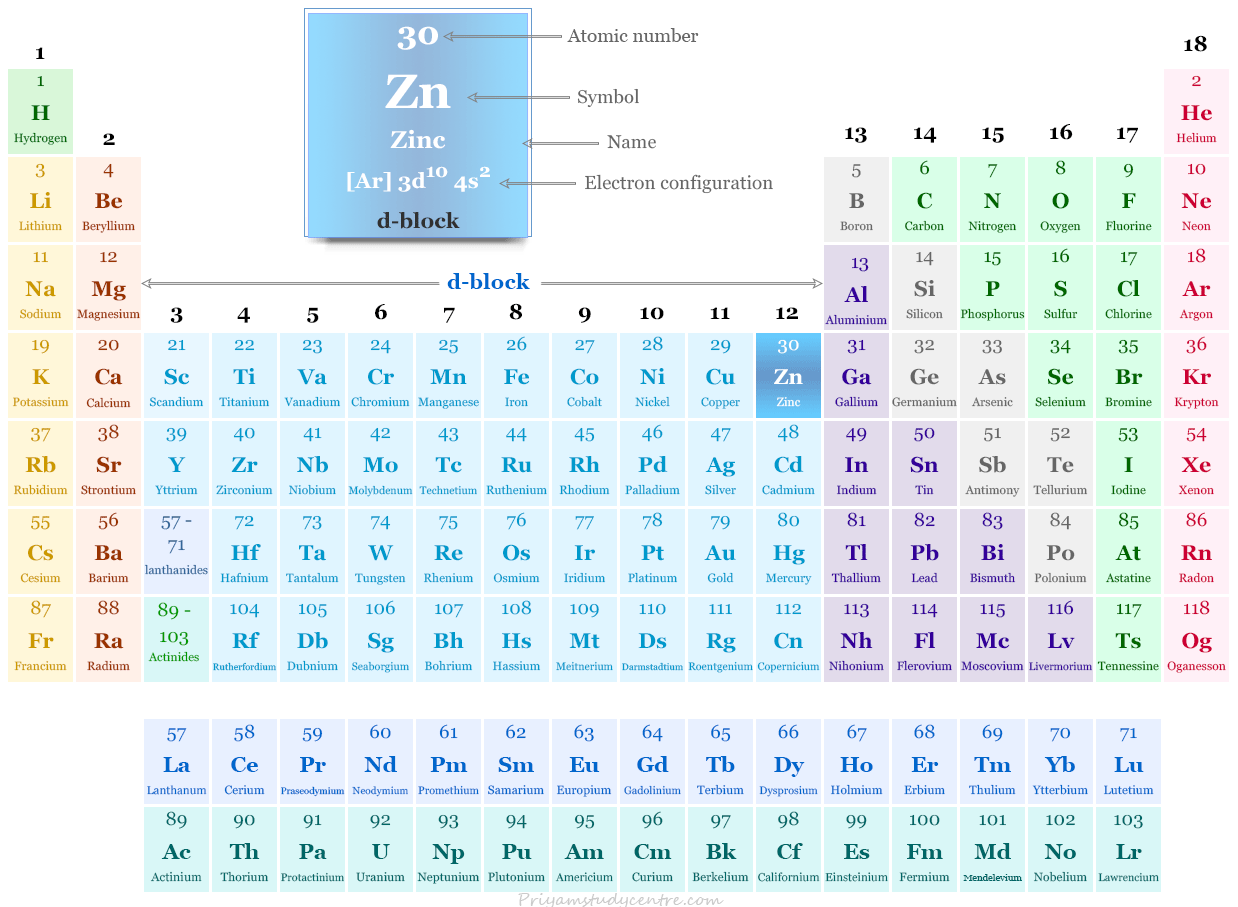 Unlike iron, the reduction of ZnO by carbon is not an effective process for the production of zinc due to its boiling point (907 °C).

Extraction of zinc by electrolysis

Presently the metal is extracted by a specially designed blast furnace. The ore is roasted to the oxide by coke which volatilizes with the hot blast. The gas is suddenly chilled by pouring molten lead on it. Therefore, the reoxidation of zinc during cooling becomes negligible.

The liquid form of zinc metal is collected at the bottom of the chamber of the furnace. It is 99 percent pure and further purified by vacuum distillation.

The large difference between the 1st and 2nd ionization energies of Zn, Cd, and Hg suggests the formation of M+ ion might be possible.

In practice, the univalent state appears and is important for mercury in the form of Hg2+2. While the +2 state is favorable for Zn and Cd atoms due to the higher hydration energy of +2 ions.

Zn (II) oxides, sulfides, and halides are the most important binary compounds of the metal. It also forms unstable hydrides, nitrides, and carbides (acetylides).

What is zinc oxide?

Zinc oxide is the common oxide of Zn with the molecular formula ZnO. ZnO is formed by heating ZnS in the air or thermal decomposition of zinc carbonate.

It is white at ordinary temperature. ZnO turns yellow owing to the loss of oxygen from the ZnO lattice to form non-stoichiometric composition like Zn1+xO. The vacant lattice points may trap electrons that are excited by visible electromagnetic radiation to show yellow colour.

It is amphoteric in nature and dissolves in acids to form a Zn+2 ion.

The sulfide of zinc (chemical formula ZnS) is very familiar to us in the routine group analysis. ZnS is produced by the direct reaction of aqueous Zn (II) with hydrogen sulfide.

ZnS appears in two crystalline solid forms like zinc blende or wurtzite. They transform each other at 1020 °C. They are readily soluble in dilute acids.

All four metal halides of zinc (ZnF2, ZnCl2, ZnBr2, and ZnI2) are known. The chloride, bromide, and iodide of zinc are also ionic with appreciable electric polarization. They crystallize as layer lattices. Fluoride like ZnF2 is ionic and highly soluble in water.

Industrially, ZnSO4 is prepared by roasting sulfide ore in air below 700 °C and leaching the mass with dilute sulfuric acid.

ZnSO4 is widely used for making calico printing and eye lotion. It is also used in medicine to supplement the intake of Zn.

The crystalline form of zinc nitrate, Zn(NO3)2, 6H2O is obtained from the solution of ZnCO3 in dilute nitric acid.

Zinc acetate is another crystalline form of the element having the molecular formula Zn(CH3COO)2, 2H2O. It is obtained from the solution of ZnO in warm glacial acetic acid.

It is largely used to provide corrosion-resistant coating in iron. A thin layer of the metal may be applied by depositing Zn on the Fe electrode (cathode) via electrolysis or by dipping it in molten zinc.

The second large use of zinc is to make different types of alloys like brass. Such alloys are used widely in making machine parts like tumbling, valves, cartridge cases, and diecasting.

The metal, Zn is used in making dry cells or batteries for torch lights, transistors, automobile, electrical, and hardware industries.